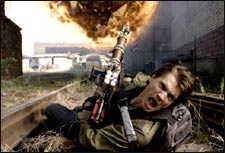 Samrat Sharma / fullhyd.com
EDITOR RATING
2.5
Performances
Script
Music/Soundtrack
Visuals
2.5
2.5
3.0
4.0
Suggestions
Can watch again
No
Good for kids
No
Good for dates
No
Wait for OTT
Yes
When I went to see The Darkest Hour, a film that is on multiple "Worst of 2011" lists, the question wasn't the merit, but whether the film was so bad it's good. A bad film that is good for a few yucks makes for a great watch sometimes, and I know I was ready for some such adventure early this year. No such luck.

The Darkest Hour is a dumb, boring film, which is made worse by its use of competent CGI to create a great big pile of nothingness for its 2-hour running time. This film is such a mess that no spectacle unleashed by Timur Bekmambetov's school of filmmaking can save it.

It is a solid addition to the long tradition of horror films with villains that never scare. After M. Night Shyamalan's The Happening, where Mark Wahlberg tries to reason with a potted plant, The Darkest Hour features aliens that are clouds of glitter. A big flying goop of mascara isn't exactly scary, but adding the fact that they can sap electricity hardly seemed worth it.

Emile Hirsch as Sean plumbs the depth of his acting career, in a terrible performance as a loud, unapologetic American visiting Russia with love interest Natalie (Olivia Thirlby) and friend Ben (Max Minghella). Horror and CGI vet Rachael Taylor completes the rectangle, though she isn't as bad as the rest. Actually, bad doesn't even begin to describe the bored, vacuous visages we are forced to stare at for the duration of the film.

The actors do nothing to redeem the completely unlikeable characters, who are generally nasty to everyone, and their bored expressions fail to sell the urgency of the gold dust clouds descending on earth. The best we get are some expansive CGI backdrops of a destroyed city before we actually get to see the real face of the aliens.

The science, as you can guess, never checks out. Aliens visit Earth to capture all the electricity, ignoring Saturn's static cloud; the good guys (hardly, but whatever) fashion a device to block all electrical signal, and then use cellphone from inside it. It's gloriously bad, or could have been if there was anything to hang it on to.

Unfortunately the film has no thrilling moments, no gratuitous violence, and poor creature design. It's painful to watch from the first moment to the end, and the only horror to be had here is the price of a ticket for this piece of garbage.
Share. Save. Connect.
Tweet
THE DARKEST HOUR (3D) SNAPSHOT

ADVERTISEMENT
This page was tagged for
The Darkest Hour (3D) english movie
The Darkest Hour (3D) reviews
release date
Emile Hirsch, Olivia Thirlby
theatres list
Follow @fullhyderabad
Follow fullhyd.com on
About Hyderabad
The Hyderabad Community
Improve fullhyd.com
More
Our Other Local Guides
Our other sites
© Copyright 1999-2009 LRR Technologies (Hyderabad), Pvt Ltd. All rights reserved. fullhyd, fullhyderabad, Welcome To The Neighbourhood are trademarks of LRR Technologies (Hyderabad) Pvt Ltd. The textual, graphic, audio and audiovisual material in this site is protected by copyright law. You may not copy, distribute, or use this material except as necessary for your personal, non-commercial use. Any trademarks are the properties of their respective owners. More on Hyderabad, India. Jobs in Hyderabad.