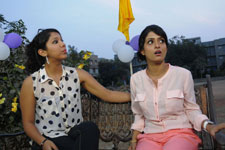 The film begins on the set of a movie as Jagan bullies the hero of his debut venture into utter incoherence, pushes him out of the way, takes his place to show him how it's done, shows us (i. e. the hapless audience) what acting ought not to be, and then proceeds to try and hack his own hand off with a kitchen knife.

We cut to an inexplicable shot that is probably supposed to be a throbbing neuron in the hero's tortured brain, and move onto a flashback involving the Hijrah community, a pimp, a naive village belle with dreams of becoming a famous dancer, a cliché factory reject of a sleazebag director, a whole lot of unbalanced screaming, and scenes that can only have been edited by a 2-bit wedding videographer.

Suffice it to say, you'd rather not know more.

Note to newbie filmmakers: There is nothing more hypocritical than a self-righteous film that thinks it is good merely because it is uncomfortable. There is nothing artistic about badly-conceived dialogues that are shocking for the sake of shocking. Weird glares do not an intense performance make, nor do outlandish scenarios an imaginative script fake.

Now that catharsis via awful poetry is done, we go, unwillingly, back to the film. Saga Reddy doesn't do much apart from behave in a manner thought to be befitting of a game-changer in the making. When he's not stealing things or shouting at people, he's either staring off into the distance talking to himself, or he's doing his whole manic Godfather thing that makes you either burst out laughing or literally bash your head against the nearest surface.

Nidhi Nathyal is quite lovely, but needs to be reminded that her face has actual muscles that can be moved. The rest of the cast is there probably because they didn't have anything else to do - perhaps like the audience, we are rather astutely guessing.

As to why this film needed song and dance, we have no hope of guessing. The background score is as loud and jarring as the rest of the film. The cinematography is an awkward amalgamation of every camera trick taught in a media school, and those scenes that aren't experimental in any way are downright incompetent.

If what you want is a hard-hitting and inspirational story of someone who makes it against all odds, Director certainly fulfills one of the requirements. It hits you hard. Like when someone picks up a rock and throws it at your head. Which the heroine tries to do in the beginning. Oh, how we wish she'd succeeded.
Share. Save. Connect.
Tweet
DIRECTOR SNAPSHOT 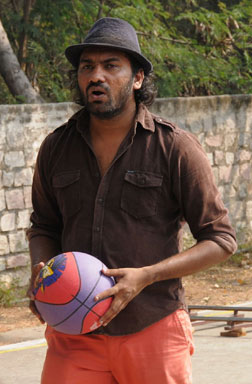 ADVERTISEMENT
This page was tagged for
Director telugu movie
Director reviews
release date
Saga Reddy, Nidhi Nathyal
theatres list
Follow @fullhyderabad
Follow fullhyd.com on
About Hyderabad
The Hyderabad Community
Improve fullhyd.com
More
Our Other Local Guides
Our other sites
© Copyright 1999-2009 LRR Technologies (Hyderabad), Pvt Ltd. All rights reserved. fullhyd, fullhyderabad, Welcome To The Neighbourhood are trademarks of LRR Technologies (Hyderabad) Pvt Ltd. The textual, graphic, audio and audiovisual material in this site is protected by copyright law. You may not copy, distribute, or use this material except as necessary for your personal, non-commercial use. Any trademarks are the properties of their respective owners. More on Hyderabad, India. Jobs in Hyderabad.