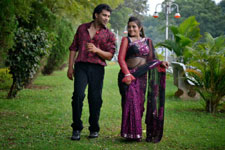 Kritika Deval / fullhyd.com
EDITOR RATING
3.5
Performances
Script
Music/Soundtrack
Visuals
2.0
2.0
4.0
3.0
Suggestions
Can watch again
No
Good for kids
No
Good for dates
No
Wait for OTT
No
It begins with about 5 minutes of attempted storytelling before a descent into an interminable bout of singing and dancing. The song is actually not quite bad. You just don't want the female vocalist's screech assaulting your ears again. Especially after Sandhya theatre's sound system transforms it into the organic equivalent of a scratch against a chalk board.

Then, you are taken into the bungalow of a corrupt politician, where he does what corrupt politicians do, following which the scene is cut to the hero and heroine, who've apparently decided to be in love forever already.

As we keep watching, you see that this improvisational mode of relationshipping isn't exactly a one-off for this film. Srujana (Padmini) and Virat (Dheeraj) fall in love in about 5 minutes. Srujana's parents fall for Virat in 2, Virat's friends for Srujana over the course of yet another screechy song, and Virat's parents for Srujana over one hello outside a police station.

While there seems to be a readymade happy ending here, the few trapped in the theatre to actually watch the film cannot possibly be so lucky as to have the makers take the first way out. So, we have a conflict. You guessed right. It involves the politician from before. Turns out, one of Virat's friends works for the man and has been privy to one too many secrets.

Ooh, that's plenty meaty. We have a powerful villain and a determined hero. Wait. It doesn't stop there. Yet another friend's parents commit suicide. Reason? A fortune lost to corruption. Did we mention? That encounter at the police station involved a parking ticket evasion, right after Virat refused to pay a monumental bribe to secure a job.

You see where this is going.

So, a motley gang of 7 resolves to bring the world to its knees. Meanwhile, our knees are turning to mush at the tedium of their righteous rage.

For all its good intentions, Vichakshana has about half an original idea in all of its potpourri of ideas. Not a single dialogue sounds like real people would speak it. And there is way too much dialoguing. When, oh, when are our directors gonna stop churning out cinema that can double as sermons in a trice?

Dheeraj wears the expression of a bauble head, and the voice of one with half a tongue. Padmini tries, which is so very not enough to make up for her own and everybody else's lack of thespic skills.

The production values are very reminiscent of that nightmare decade for cinema, the '90s. The camera work extends every scene by 5 minutes, what with all the hands and the eyes that needed focusing on. The editing should have left out that plethora of 5 minutes.

To be very honest, Vichakshana is not as bad as some of the cinematic experiences this writer has gone through over the last month. However, nor is it much better.
Share. Save. Connect.
Tweet
VICHAKSHANA SNAPSHOT 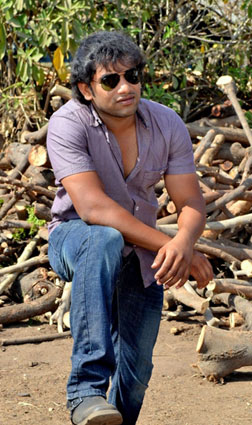 ADVERTISEMENT
This page was tagged for
telugu full vicha shodhru .com
Vichakshana telugu movie
Vichakshana reviews
release date
Dheeraj, Padmini
Follow @fullhyderabad
Follow fullhyd.com on
About Hyderabad
The Hyderabad Community
Improve fullhyd.com
More
Our Other Local Guides
Our other sites
© Copyright 1999-2009 LRR Technologies (Hyderabad), Pvt Ltd. All rights reserved. fullhyd, fullhyderabad, Welcome To The Neighbourhood are trademarks of LRR Technologies (Hyderabad) Pvt Ltd. The textual, graphic, audio and audiovisual material in this site is protected by copyright law. You may not copy, distribute, or use this material except as necessary for your personal, non-commercial use. Any trademarks are the properties of their respective owners. More on Hyderabad, India. Jobs in Hyderabad.