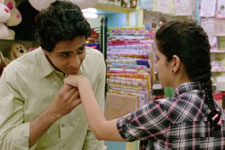 Nupur Barua / fullhyd.com
EDITOR RATING
6.0
Performances
Script
Music/Soundtrack
Visuals
8.0
6.0
6.0
7.0
Suggestions
Can watch again
Yes
Good for kids
No
Good for dates
Yes
Wait for OTT
No
Sex comedies in India are always a dicey proposition, and always male-oriented (since, thank heavens, Indian women do not have secret desires). It is easier to laugh at and with a male protagonist, no matter how pathetic or sleazy he is. Harshavardhan Kulkarni knows this, and he goes all out to bring to us a coming-of-age story, with plenty of sex and comedy, of an ordinary man who may just seem familiar.

Confused? So is Mandar Ponkshe, a.k.a. Vaasu (Gulshan Devaiah). He has, since adolescence, been unusually fascinated by sex. It was first a mystery, and he did not know how to go about accessing, vicariously or otherwise, some of the pleasures he just knew were lying in wait for him. In fact, he has even been punished for it, but he has also always known that sex is his only salvation. And so he becomes an expert - from pleasing himself to learning about the deepest, darkest fantasies of a woman so that he can please them. He becomes a stud, and is much in demand, as is his "Vaasugiri". He smells out his prey and gives them experiences to cherish, but the minute they become clingy or demanding, he runs.

This is why he decides never to marry, because monogamy is for idiots with no imagination. The confusion begins, though, when he meets with Trupti (Radhika Apte), a normal, everyday girl, but painstakingly honest. She is nonchalant about the number of affairs that she has had, and is not even concerned that her history contains many failures and a broken engagement. Not that she is unfeeling - she is just too chilled out. What confuses Vaasu even further is that he finds himself in love with her.

In his experience, a woman will not take too kindly to being a man's nth lover, or so he thinks. Which is why he tells Trupti that he is as virginal as fresh snow. His guilt, about his own lies, tells him that Trupti deserves honesty, which is essential for a relationship. And he wants a relationship with her, not just a few nights of mindless sex. Caught in a dilemma, because he is convinced she will run away, Vaasu turns to his cousin (Sagar Deshmukh). And thus begins Vaasu's recounting of his past, which becomes more and more sordid, and yet laughable, with every passing tale.

Hunterrr has a screenplay with its heart in the right place. It brings to your attention the taboo that sex has become in this country, and tells you, with enough flippancy to make it funny, how dangerous that can be. If Vaasu were given more freedom to express his desires, then maybe he would not have had to run so wild. There is no dearth of opportunity, as he discovers, but the consequences may be fatal, which he almost discovers.

Once the story begins, it has you hooked. Till it meanders. The first half is fun, sad, meaningful, touching, hilarious, thrilling - all at once. You immediately invest in this rather sleazy young man, because you cannot help feel his pain, or whatever it is that he feels at various points in the story. You get him, you do, but you would never endorse this behaviour in a close friend or relative.

The second half takes away all your sympathies, and you wish the movie would finish already. The constant yo-yoing between the past and the present makes it all the more unbearable, and baffling, as the film crawls to an almost predictable conclusion. Even the humour seems repetitive. You almost wonder if you had walked into another film after the interval.

The star of the movie is Gulshan Devaiah, undoubtedly. He takes a hold of your heart and does not let go. He is convincing and irritating and loveable as Vaasu, and you cannot take your eyes off him. Radhika Apte proves that her performance in Badlapur was no fluke, and that she is somebody to watch out for. Sagar Deshmukh does his bit convincingly, and Veera Desai and Sai Tamhankar fill in the gaps nicely. The supporting cast is also commendable. This film scores mostly for its acting.

The production design cashes in on the theme of retro/nostalgia and gives you erratic settings, much like Vaasu's state of mind. The deliberately mismatched colour scheme and the costumes only add to the simplicity and authenticity of this world. And that is what the cinematographer trips on, with some terrific shots.

The music is loud, and memorable - apt for the setting. The only technical flaw is the editing, but then again, the script is written in such a manner that not much could have been done with the sequence of shots shown in the movie. You'd expect it to be a bit tighter, though.

Hunterrr is a relevant film in this day and age of censorship and needless indignation. It is an expression of creativity, and that is why you should watch the movie. The writing needed attention, sure, but at the end of the day, it is a film that you will remember for a while, and it may just herald the beginning of a new genre that can be fun without the slimy bits. It is not a movie you can watch with your family, but both the old and the young can relate to some event or the other portrayed in the film. Watch it at least once, for the acting if nothing else.
Share. Save. Connect.
Tweet
HUNTERRR SNAPSHOT

ADVERTISEMENT
This page was tagged for
Hunterrr hindi movie
Hunterrr reviews
release date
Gulshan Devaiah, Radhika Apte
theatres list
Follow @fullhyderabad
Follow fullhyd.com on
About Hyderabad
The Hyderabad Community
Improve fullhyd.com
More
Our Other Local Guides
Our other sites
© Copyright 1999-2009 LRR Technologies (Hyderabad), Pvt Ltd. All rights reserved. fullhyd, fullhyderabad, Welcome To The Neighbourhood are trademarks of LRR Technologies (Hyderabad) Pvt Ltd. The textual, graphic, audio and audiovisual material in this site is protected by copyright law. You may not copy, distribute, or use this material except as necessary for your personal, non-commercial use. Any trademarks are the properties of their respective owners. More on Hyderabad, India. Jobs in Hyderabad.