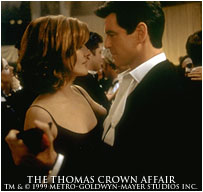 Arpan Panicker / fullhyd.com
EDITOR RATING
8.0
Performances
Script
Music/Soundtrack
Visuals
NA
NA
NA
NA
Suggestions
Can watch again
NA
Good for kids
NA
Good for dates
NA
Wait for OTT
NA
Any actor, however good, does get bogged down by the numerous idiosyncracies that his fans start associating with him, as the number of films that he has done increases with time. Pierce Brosnan has done a volte-face leaving behind his irritating Bond image. He is still impeccably dressed; he is still cool and unruffled in the most ruffling of circumstances; and he still delivers bone-tickling one-liners with a deadpan expression. But there is a human element to Thomas Crown that makes him a really lovable character.

Pierce Brosnan plays Thomas Crown, a rags-to-riches riser, an ex-pugilist who has done it all and has always come out the winner. He is a billionaire who pulls off an amazingly planned and beautifully executed heist just for the kick, when he can actually afford to buy it.

The museum is frantic over the loss of their precious Monet. Enter Catherine Banning (Rene Russo), an employee of the insurance company covering the painting. She's got $5 million to gain and nothing to lose. She soon closes in on Crown as the one and only suspect. Here starts a cat and mouse game, which intensifies with every scene.

She knows he's done it. He knows she knows. And the fun part is that both of them don't bother acting innocent. Everyone knows who the culprit is. It is just a question of proving it. As moves and counter-moves are made, the Crown and Banning chemistry starts revving up and they take off on a vacation. The locales are beautiful and a treat to the eyes. But the director gets a little lost in the locales and the atmosphere, and the movie seems to meander about pointlessly. But with the climax approaching he soon pulls up his socks and tightens the slack.

Crown offers to replace the painting undetected if Banning will come away with him to an exotic resort as a fugitive. This forms the crux of the movie. Banning in two minds - she's not sure she can trust Crown because of the glimpses she gets, on and off, of him with a gorgeous female (Esther Canadas). Her decision does not deter Crown who, in another brilliantly masterminded operation, replaces the painting. The climax is fittingly crafted with plenty of twists.

The movie is a masterpiece in subtlety. There are no fancy gadgets, no deadly villains and definitely no awe-inspiring explosions. All these elements are replaced with lifted eyebrows, eloquent silences and convincing performances from Pierce Brosnan and Rene Russo. The chemistry between these two literally sets the screen on fire.

Denis Leary plays an inconsequential role as a police detective in charge of the case. Faye Dunaway plays a cute little cameo as Crown's shrink. A well-crafted movie that definitely deserves applause. And one last piece of advice; Bond fans, please don't expect Brosnan to go, "The name is Crown, Thomas Crown." He has much better things to do in this movie.

ADVERTISEMENT
This page was tagged for
The Thomas Crown Affair english movie
The Thomas Crown Affair reviews
release date
Pierce Brosnan, Rene Russo
theatres list
Follow @fullhyderabad
Follow fullhyd.com on
About Hyderabad
The Hyderabad Community
Improve fullhyd.com
More
Our Other Local Guides
Our other sites
© Copyright 1999-2009 LRR Technologies (Hyderabad), Pvt Ltd. All rights reserved. fullhyd, fullhyderabad, Welcome To The Neighbourhood are trademarks of LRR Technologies (Hyderabad) Pvt Ltd. The textual, graphic, audio and audiovisual material in this site is protected by copyright law. You may not copy, distribute, or use this material except as necessary for your personal, non-commercial use. Any trademarks are the properties of their respective owners. More on Hyderabad, India. Jobs in Hyderabad.