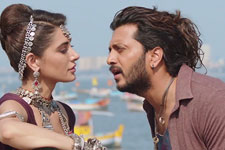 Jaiwantika Dutta-Dhupkar / fullhyd.com
EDITOR RATING
6.0
Performances
Script
Music/Soundtrack
Visuals
7.0
4.0
6.0
7.0
Suggestions
Can watch again
No
Good for kids
No
Good for dates
No
Wait for OTT
No
Banjo is an earnest effort that seeks to tell the truth about the lesser-known underground music scene in India. It draws parallels between the prevailing music cultures across the globe and those in India to understand 'street music' - and even though any historical or cultural reference is lacking, the poverty of the musicians and their charming lower-class slum life is context enough. So, even though Banjo is technically made in a void, issues abound in this film. The film, however, neatly avoids any issues, and focuses on a motley band of musicians and their meteoric rise to stardom.

Banjo charts the musical passions of Taraat (Riteish Deshmukh) and his friends Grease, Paper and Bajwa who play a festival band, performing at Ganesh pandals and Navratri events. Taraat plays the banjo, while Grease, Paper and Bajwa play the drums. The four moonlight as musicians even as they lead their sordid lives, struggling to make ends meet. Their misery attracts Christina (Nargis Fakhri), whose interest in banjo music brings her from New York to India for a quick slum recce and the hope of some kitschy music to offer at yet another international music fest.

Even as Christina wades through the red tape and hostile environment with a friend Mikey (Luke Kenny), she befriends Taraat and his band of merry men, who show her the Mumbai she never knew and regale her with their music (Vishal-Shekhar). Christina is goaded into getting the four a music contract, and finally wriggles one out of a reluctant music producer - who however never repents that decision afterwards as Taraat and his banjo band go on to take centrestage and regale audiences. There's a subplot about an attempt-to-murder charge in which the band is framed at a politician's birthday party.

Banjo is a good film for the fact that it acknowledges that people who live below the poverty line, in slums and shanties, also possess some sort of culture. In fact, the film says, quite truthfully, that slums and shanties are 40% of Mumbai, and the music culture bred here is relevant. Implicitly, it questions the import of Western ghetto music and Western revolutionary music styles when indigenous varieties exist. It assumes a good deal, though, about a prevalent musical culture, and appropriates it.

Banjo ignores the Bollywood contemporary, classical and folk music - the only three styles of music that have successfully made a long-term impact on the Indian psyche. Thus, our banjo foursome live in some kind of bubble - where they work by the day and play the banjo by the night. But their musical influences are unknown. What motivates them to be the best in their field is also a mystery - their music is projected as some kind of behavioural quirk rather than the result of the disciplined practice every musician is familar with.

If you love badass films with loads of taporipanti, you'll love Banjo. The film goes one step further and says that taporis make good rockstars, and this is one reason why you'll like the film. It's an idea that makes sense, but is historically inaccurate at the same time because, ultimately, music doesn't discriminate against anyone, tapori or not.

Banjo is also historically inaccurate because it completely ignores Western musical influences - so even if the banjo was never actually part of a revolutionary culture, global music that echoes the daily frustrations of the people has always found a welcome audience in India, across language and social classes. In terms of access, Banjo assumes that the only kind of music slum-dwellers have access to in the age of the internet is their local 'Ganpati band', which may have been true for the 1970s, but certainly not for 2016.

At what point Banjo goes from being an issue-based film to being a film where the biggest issue is the band's next gig, is hard to tell. The film showcases Christina at her activist best in the first half of the film, and by the end she's rocking the stage with no practice at all. There's talk about music fests and big gigs, but for all the focus on their meagre lives, the band members only care about the most flippant things when working towards their goals.

Yet, you'll love Banjo for Ravi Jadhav's raw appeal in directing this film - it seeps through every frame and every song. This is also one of Riteish Deshmukh's best films till date, and he's ably supported by a talented cast. Nargis Fakhri looks lovely and acts well, and you want to see more films with her in the lead.

Banjo also has some good cinematography (Manoj Lobo) and music. It's a well-cut film (Devendra Murdeshwar) that keeps you entertained. The writing (Ravi Jadhav, Nikhil Mehrotra, Kapil Sawant) is a bit silly and there isn't much of a story, but do you mind?

Banjo tries to recreate the mania of the local Ganpati band - the wild drums, the wilder dancing, the drunken smiles and the riot of colours - and actually makes a convincing effort. Go watch this one.
Share. Save. Connect.
Tweet
BANJO SNAPSHOT 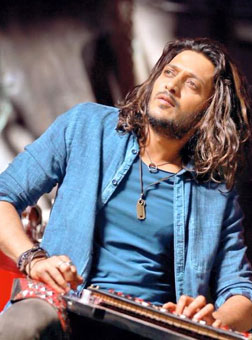 ADVERTISEMENT
This page was tagged for
banjo hindi movie
Banjo hindi movie
Banjo reviews
release date
Riteish Deshmukh, Nargis Fakhri
Follow @fullhyderabad
Follow fullhyd.com on
About Hyderabad
The Hyderabad Community
Improve fullhyd.com
More
Our Other Local Guides
Our other sites
© Copyright 1999-2009 LRR Technologies (Hyderabad), Pvt Ltd. All rights reserved. fullhyd, fullhyderabad, Welcome To The Neighbourhood are trademarks of LRR Technologies (Hyderabad) Pvt Ltd. The textual, graphic, audio and audiovisual material in this site is protected by copyright law. You may not copy, distribute, or use this material except as necessary for your personal, non-commercial use. Any trademarks are the properties of their respective owners. More on Hyderabad, India. Jobs in Hyderabad.