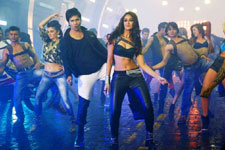 Nupur Barua / fullhyd.com
EDITOR RATING
6.0
Performances
Script
Music/Soundtrack
Visuals
6.0
4.0
6.0
5.0
Suggestions
Can watch again
Yes
Good for kids
No
Good for dates
Yes
Wait for OTT
Yes
There was a time, not too long ago, when David Dhawan ruled the roost in the Hindi film industry. His OTT comedies, usually with Govinda and sometimes with Salman Khan and Sanjay Dutt, were mass pullers (remember Coolie No. 1 and other such films?). Add to that the nonsensical songs that the hero and heroine sang to each other, and the audience used to go wild. Govinda became a superstar with these movies, and David Dhawan laughed all the way to the bank. Now, more than a decade later, the director has decided to create another star in the same mould - his son, Varun Dhawan, who made his debut with Student Of The Year and has been in the news ever since.

David Dhawan is comfortable in the genre that he has been the master of all these years - slapstick comedy. The story of his latest release, Main Tera Hero, may have been tweaked a bit to suit the sensibilities of the current generation, but it is classic David Dhawan otherwise.

Seenu (Varun Dhawan) is a loser, whose father (Manoj Pahwa) desperately wishes that his son had graduated at least. Seenu finally gives in and enrols himself in a college, and finds that his classmates are more than five years younger, on an average. That does not stop him from behaving their age, and he jumps headlong into a life of partying and girl-watching.

Which is when he meets with Sunaina (Ileana DCruz). She seems interested in him, but she has a fiancé Angad (Arunoday Singh), whom she is not interested in. This leads to face-offs between the no-good Seenu and the brawny cop Angad.

Just when you think the situation could not get worse, enter Ayesha (Nargis Fakhri). She is the hot one, as opposed to the more conventional Sunaina. And she has the hots for Seenu. Sunaina's feelings do not matter to Ayesha, and when she proves to be a bother, Ayesha just asks her father (Anupam Kher), who is a mafia don somewhere abroad, to kidnap her rival in love. Her father will do anything to keep his daughter happy, of course. And that is when all the action begins. To find out whom Seenu ends up with, you have to watch the entire movie, and who knows, you may have fun doing it.

Basically, there are two love triangles - one that has Seenu, Sunaina and Angad, and the other that has Seenu, Sunaina and Ayesha. This is unique by David Dhawan standards, and the scope of misunderstandings (his favourite device) is so large that you think the movie will never end. That is not to say that it is mundane or boring. The very opposite, in fact. The trick with his movies, for those who came in late, is to stop analysing them and just go with the flow.

The screenplay is anything but tight, although the second half is relatively badly written. The humour is so simple and amateur that instead of getting irritated, you will find yourself in splits. That is the beauty of a mindless David Dhawan movie - you know it is not intelligent cinema (or maybe it is), but you are drawn to it nevertheless.

The plot is reminiscent of a Govinda blockbuster, and there are enough unnecessary distractions that are not relevant to the progress of the story, but you sit through all of them patiently, because you know that they are a substitute for substance - something the screenplay lacks, predictably. The jokes are OTT, and the conversations with God border on irreverence.

Just when you think this movie may just get slow, the director inserts a song that does not have much to do with the plot, but immediately distracts you from finding faults with the film.

Varun Dhawan is a poor substitute for Govinda, but that does not mean that he is not a star, which he is. He plays his Govinda-inspired role to perfection, and is more convincing as a college student than the other actor could have been. He dances, laughs, cries, flirts, fights and loves with equal amounts of passion. He is the hero, and he knows it. His screen presence is tremendous, and despite the comparison to his father's favourite actor, he is here not only to stay, but to create his own genre of comedy.

And if Varun Dhawan is compared to the yesteryear star, it is inevitable that the object of his affection in the movie, Ileana DCruz, will be pitched against Karisma Kapoor and Raveena Tandon, to name two feisty co-stars that Govinda made magic with. She falls short of expectations then, and is rather bland, but she looks pretty.

Nargis Fakhri, by now, is expected to be just the glamour quotient, given her lack of acting skills, and this she does well. Anupam Kher reminds us why we loved him as the ridiculous comic relief many films ago, before he became more serious.

The supporting cast is able, but the surprise package is Arunoday Singh. He threatens to steal the limelight from Varun Dhawan in more than a couple of sequences, in an avatar that he has not donned before. And why was Shakti Kapoor in the movie? For old times' sake?

The production design is gaudy, but it suits the tone of the film. Ditto for the costumes. The music is already topping various lists on music channels, and is foot tapping, in spite of the lack of depth in lyrics and content. The songs burst out at odd points in the movie, but if you look closely, there is a pattern - just when the story threatens to get (God forbid) serious or logical, a song is the best way to bring you (and the characters) back to la-la land. The cinematography and editing are average, and it looks like both departments had a lot of fun.

Main Tera Hero is not the kind of movie that you will admit you enjoyed, in polite society at least, but it is pure entertainment. Even the effort of being snobbish about it is not worthwhile. Watch it, for laughs, without apology, and take your family along while you are at it - the adult jokes and references to sex are almost missed because you are so busy watching Varun Dhawan move his nipples up and down without touching them, and because you sigh wistfully for the good old days of single theatres when Govinda ruled the roost.
Share. Save. Connect.
Tweet
MAIN TERA HERO SNAPSHOT 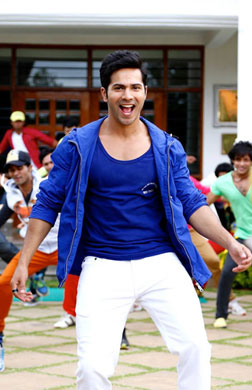