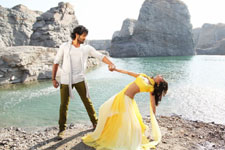 Ravi Kandala / fullhyd.com
EDITOR RATING
4.0
Performances
Script
Music/Soundtrack
Visuals
7.0
4.0
3.0
4.0
Suggestions
Can watch again
No
Good for kids
No
Good for dates
No
Wait to rent it
No
If RGV gave Mario Puzo a penny for every time he drew inspiration from Godfather, Puzo would be richer than the Vatican today. The maverick director has confessed that he loves Godfather, and that Sarkar, starring Amitabh and Abhishek Bachchan, was his adaptation of / tribute to the story. We were glad then that he picked up the iconic story and gave it an Indian twist. His second attempt at it makes us sad he ever saw that film.

Rowdy comes amid a surprising amount of hype - surprising due to the fact that Varma has not made a decent movie in the longest time now and is still able to create enough hype for his future projects. The film's first look with Mohan Babu created a flutter, but the trailer made it clear that Varma was just rehashing Sarkar. Varma strongly refuted such opinions, and he was right - Rowdy is not a remake of Sarkar. It is a mix-and-match of both Sarkar and Sarkar Raj. Seems like our man is confident that no sequel will be possible in Telugu.

Rowdy, then, tells the familiar tale of a patriarch, Annagaaru (Mohan Babu), who lords over an unspecified place in Rayalaseema. He is a law unto himself and will go to any extent to preserve what he thinks is right. The whole area reveres him, and this reverence obviously brings enemies with it.

Annagaaru has two sons, Bhushan (Kishore) and Krishna (Vishnu). Bhushan is hot-headed, does not believe in the same ideals as his father, is constantly reprimanded by Annagaaru, and consequently hates his father. A bunch of villains comprising Vedantham Murthy (Tanikella Bharani), Jeeva and a couple of others make use of this enmity and plot to kill Annagaaru. Annagaaru survives and takes revenge on the perpetrators with substantial help from Krishna.

This familiar plot is retold by Varma in his completely familiar manner once again. Rowdy has the same close-up shots, extremely loud background music and familiar gamut of characters with their own quirks. Sai Karthik fills the background score with loud chants and louder music that ensure a headache.

Mohan Babu is outstanding in his character, and the no-makeup look suits him to the T. He provides the spark to this version of Sarkar and might single-handedly end up saving it.

There are two pronunciations to the word "kallu". When you enunciate the 'll' in one manner it means eyes, and when you do it in a different manner it means toddy. Vishnu, sadly, may never realise the difference between the two. His diction remains the same, but he makes a sincere effort in this movie to act.

The villains are pretty sad. Tanikella Bharani irritates to the maximum with his vedantam while Jeeva does nothing but utter a few loud lines. There are another couple of persons, one of whom constantly swings from side to side when speaking while the second constantly eats cake - the motivations behind these actions are never explained.

The film's background chant runs like this - "Dharmaniki Rowdy, Nyayaniki Rowdy, Dharmanni, Nyayanni Kaapade Rowdy". A second background song titled "Idi Raa Seema Lekka" translates to this: "We don't show the second cheek like Gandhi asked us to, here we cut the hand that is raised to hit us before it reaches the first cheek." We wonder if this is really what Rayalaseema is known for or if these movies are just going to resuscitate an almost-dead streak.

The other irritating thing about Rowdy is the usage of the word "respect". It is used at least a hundred times through the movie, and starts grating pretty soon.

Rowdy is Sarkar retold with another father-son duo. If you have been living under a rock and haven't seen Godfather or Sarkar or Sarkar Raj, then you can brave this one.
Share. Save. Connect.
Tweet
ROWDY SNAPSHOT 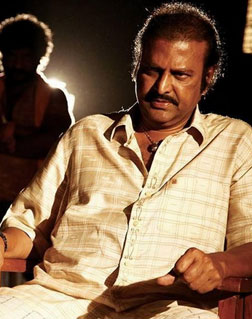 See Rowdy full details
ROWDY USER REVIEWS
1 - 2 OF 2 COMMENTS
POSITIVE  |  NEGATIVE |  NEWEST  |  OLDEST  |  MOST HELPFUL  |  LEAST HELPFUL
diehard on 16th Apr 2014, 9:47pm | Permalink
"We wonder if this is really what Rayalaseema is known for or if these movies are just going to resuscitate an almost-dead streak..."

Why don't these thoughts cross your mind when reviewing faction movies of Jr.NTR or Venkatesh or Ravi Teja or any other so called 'top' heroes in telugu??????


"There are another couple of persons, one of whom constantly swings from side to side when speaking while the second constantly eats cake - the motivations behind these actions are never explained...."

Well, regular main stream telugu movies are REPLETE with these kind of inexplicable characters of inexplicable mannerisms. I never ever seen you highlighting those in your reviews. Why?????

ADVERTISEMENT
This page was tagged for
Rowdy telugu movie
Rowdy reviews
release date
Mohan Babu, Manchu Vishnu
theatres list
Follow @fullhyderabad
Follow fullhyd.com on
About Hyderabad
The Hyderabad Community
Improve fullhyd.com
More
Our Other Local Guides
Our other sites
© Copyright 1999-2009 LRR Technologies (Hyderabad), Pvt Ltd. All rights reserved. fullhyd, fullhyderabad, Welcome To The Neighbourhood are trademarks of LRR Technologies (Hyderabad) Pvt Ltd. The textual, graphic, audio and audiovisual material in this site is protected by copyright law. You may not copy, distribute, or use this material except as necessary for your personal, non-commercial use. Any trademarks are the properties of their respective owners. More on Hyderabad, India. Jobs in Hyderabad.