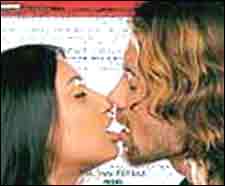 Preetam Akkineni / fullhyd.com
EDITOR RATING
3.0
Performances
Script
Music/Soundtrack
Visuals
NA
NA
NA
NA
Suggestions
Can watch again
NA
Good for kids
NA
Good for dates
NA
Wait for OTT
NA
When the film opened with a pan out sequence of a television playing static, we prayed and hoped this was not another Poltergeist or Ring rehash.

We were blessed. It was just another bizarre pretentious attempt at filmmaking by a wannabe crossover Director. But then the phones with irritating ring tones started ringing (not just in the theatre, in the movie as well). This Hot Female begs you to meet her 9. And she calls up a billion other phones (we hear ALL of them ringing in a “Phone Ring Montage”) and tells them the same thing.

Enter Bakra-Hero. Small intro of Bakra Hero. He is a movie director and has made tons of money making movies which usually have a babe in a red bikini with gothic makeup, walking like a zombie and stalking men. But he’s getting bored of them. So he agrees to meet the aforementioned Hot Female at 9.

At the stroke of nine, the Hot Female, wearing all white, with her hair covering her eyes and chest ala Noorie, walks in to meet Bakra Hero. Now any person with an intelligence greater than that of a watermelon will hit the road as soon as the chick walks in. But our Horror Film Director thinks it is normal, and starts romancing with her.

Strangely our Heroine likes to draw a Pentagram everywhere she goes. She chalks it on the rocks, sandpaints it and even arranges shells in the shape. Still our Bakra Hero doesn’t take a hint. The couple snuggle in the beach headbanging to Sonu Nigam Rock that suddenly morphs into a Gospel Choir singing hymns.

Step in twin sister of Hot Female. Obligatory strip/sex scene done, the twins disappear. The Horror Movie Director gets so distressed, he sleeps with his Assistant Director who has been lusting after him for a while. Hot Female takes a heel turn and becomes Psychotic Lover/Killer. The End.

But the movie experience doesn’t end there. The brilliant visuals were eye candy and the vague expressionism reminded me a Hollywood Director of high acclaim. The painstaking effort put into composing the visuals was evident from the emotions coming across subtly even in long-drawn scenes. To put it simpler – he is pretentious.

The music was built around mood shifts brilliantly, and the casting sequence was quite a surprise. It had lots of anime sketches of Satanical figures fighting samurai babes. Whatever sense that makes.

Director Marlon Rodriguez seems to be an educated film geek, but his work comes off as totally alien to audiences that walk in to watch the movie. The posters promoted sleaze and thrills, but you get only two bikini and three love scenes. You also get extensive peeks into a Psychotic Killer’s hammer/axe arsenal. But you get a lot of trees, sun, dripping water and landscapes.

Though a very talented director, Rodriguez should pay more attention to the story and screenplay to channelize his ability to make beautiful Indian Cinema.

ADVERTISEMENT
This page was tagged for
c u to 9 Hindi movie download
mission kashmir movie in hindi kickass
c u at 9 full movie
C U at 9
cu at 9 movie download
Follow @fullhyderabad
Follow fullhyd.com on
About Hyderabad
The Hyderabad Community
Improve fullhyd.com
More
Our Other Local Guides
Our other sites
© Copyright 1999-2009 LRR Technologies (Hyderabad), Pvt Ltd. All rights reserved. fullhyd, fullhyderabad, Welcome To The Neighbourhood are trademarks of LRR Technologies (Hyderabad) Pvt Ltd. The textual, graphic, audio and audiovisual material in this site is protected by copyright law. You may not copy, distribute, or use this material except as necessary for your personal, non-commercial use. Any trademarks are the properties of their respective owners. More on Hyderabad, India. Jobs in Hyderabad.