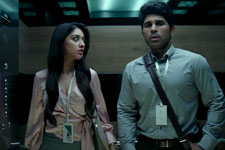 Sai Tulasi Neppali / fullhyd.com
EDITOR RATING
4.0
Performances
Script
Music/Soundtrack
Visuals
6.0
4.0
7.0
6.5
Suggestions
Can watch again
No
Good for kids
No
Good for dates
Yes
Wait for OTT
No
What passes off for a "modern" rom-com in Tollywood these days is a role reversal between the man and woman. Instead of the sweet, demure, virginal heroines of the '80s and '90s, today's girls are independent and free-spirited. Much to the bewilderment of men, they drink (gasp!) and have pre-marital sex (gasp, gasp!). But if you think that a character refresh equals a refreshing movie, you will be sorely disappointed by Urvashivo Rakshasivo, which is every bit as formulaic as the rom-coms of decades past.

Sri (Allu Sirish) and Sindhu (Anu Emmanuel) work in an IT company. And something about the open-office layout and the lax managers that get the romantic juices flowing makes them fall in love with each other, despite their polar-opposite personalities.

Sindhu is an open-minded, mature girl whereas Sri is an innocent, middle-class mamma's boy. He is in fact so meek that on his first handshake with Sindhu, he visibly shivers with nervousness and thrill. But the boy becomes a man after a passionate kiss with Sindhu in an elevator turns into an all-night tumble 'neath the sheets.

The couple's problem, very obvious from miles away, is the disparity between Sri's and Sindhu's upbringings. Sindhu was raised by a salsa-dancing single dad, whereas Sri is from a family where girls wearing shorts or makeup - girls like Sindhu - are judged as trashy or lacking in family values. Even as Sindhu and Sri's romance blossoms, Sri knows that there is absolutely no chance for his mother to accept a girl like Sindhu, to whom sex is casual and marriage is a career-killer.

So when the time comes to take their relationship to the next level, they decide to get into a secret live-in arrangement. Sri runs back and forth between his apartment and his home like a cartoon animal, hiding his new life from his parents. Sri's entourage - his supportive friend Satish (Vennela Kishore) and his brother-in-law (played by Sunil) - narrate this unfolding drama to viewers like commentators at an IPL match.

Urvasivo Rakshasivo has several such over-elaborate comedic sequences that go on for a few too many beats, before abruptly cutting to the serious matters that are actually relevant to the story. As for the serious matter at hand, it is a Relationship 101 question: if love, career and family are at odds with one another, which will prevail in the end?

No points for guessing the answer. Telugu audiences supposedly don't tolerate realism in their movies, so Urvashivo Rakshasivo resolves this dilemma on a predictably happy note, adding nothing new to the conversation about the challenges of love.

Maybe there was an original, fresh idea about modern love during the genesis of Urvasivo Rakshasivo, but thanks to papering over the story with abundant jokes and gratuitous songs, its intent was lost. There is not even a single scene that establishes rapport or compatibility between Sri and Sindhu before they begin waltzing around in love and contemplating their future together.

The mismatch between the pair is so acute that when Sindhu finally professes her love for Sri, the big question mark hanging in the air for the viewer is: "Really? Him?" Sindhu is a gorgeous, easy-going, somewhat sensible girl, whereas Sri behaves with the maturity of an emotionally-stunted pre-teen. Together, their romance has the shallow vibe of a perfume ad - lots of rose petals and wine glasses, and not enough meaningful conversations.

There is a reason that actor Allu Sirish hasn't achieved the heights that his brother Allu Arjun has. Sirish's facial features and mannerisms are pale and charmless imitations of those of his brother, and watching him try to be goofy and animated like Arjun is like watching a deepfake at work.

Anu Emmanuel is well-cast as Sindhu - her shapely body juiced for the movie's numerous intimate scenes. Too much of a good thing is bad, though, because she looks way out of Sri/Sirish's league.

Vennela Kishore and Sunil play the usual buffoon-cum-sidekicks who make jokes and get chased around with broomsticks for fun.

Urvasivo Rakshasivo is another unremarkable manifestation of the rom-com genre where romance is taken to mean raunchy scenes and comedy to be pedestrian puns and double-meaning jokes. Its writing is so vacant and immature - Sindhu's favorite line is about how boys are so "cute" when they are angry - the script feels like the work of a reclusive man who has never interacted with a woman before.

Admittedly, nobody watches an Allu Sirish movie for the depth of dialogue or philosophical nuance. But Urvashivo Rakshasivo feels like an especially torturous timesuck designed by the Allu family to keep their clan relevant. Case in point: Vennela Kishore's jokes make multiple references to OTT platforms and binge-watching - a not-so-subtle push for the Allu-owned streaming service Aha!

Well, they can keep making their shoddy movies, and the audience will keep... not watching. 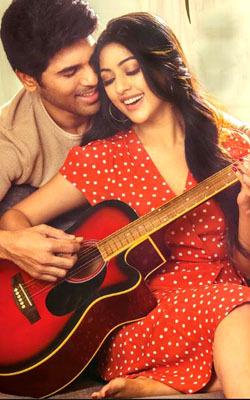 ADVERTISEMENT
This page was tagged for
Urvasivo Rakshasivo telugu movie
Urvasivo Rakshasivo reviews
release date
Allu Sirish, Anu Emmanuel
theatres list
Follow @fullhyderabad
Follow fullhyd.com on
About Hyderabad
The Hyderabad Community
Improve fullhyd.com
More
Our Other Local Guides
Our other sites
© Copyright 1999-2009 LRR Technologies (Hyderabad), Pvt Ltd. All rights reserved. fullhyd, fullhyderabad, Welcome To The Neighbourhood are trademarks of LRR Technologies (Hyderabad) Pvt Ltd. The textual, graphic, audio and audiovisual material in this site is protected by copyright law. You may not copy, distribute, or use this material except as necessary for your personal, non-commercial use. Any trademarks are the properties of their respective owners. More on Hyderabad, India. Jobs in Hyderabad.