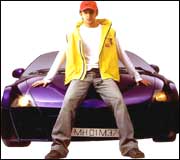 Deepa Menon / fullhyd.com
EDITOR RATING
3.0
Performances
Script
Music/Soundtrack
Visuals
NA
NA
NA
NA
Suggestions
Can watch again
NA
Good for kids
NA
Good for dates
NA
Wait to rent it
NA
Let's clear it up right at the start: Taarzan The Wonder Car features no loincloth-clad muscleman, no swinging vines, no maternal apes. Instead it has a hero who is ceaselessly cute, a heroine who's lost crucial bits of her dress to fashion, and a car that is possessed by a dead Ajay Devgan. Yup, this is one long movie.

According to all the promos we've watched with bated breath, the film has a car for its protagonist. Guess they decided on the latter when the choice was between Vatsal Sheth and a snazzy set of wheels. Mind you, they might have chosen the latter if it was between Vatsal Sheth and a garden hose, but that's another story. The car is, of course, no ordinary car. It's violet, and low-slung, and emits enough smoke to choke a small country. We suppose it serves as a decent ad for its celebrity designer, Dilip Chhabria, the man who gives James Bond his new Aston Martin in 2005.

Eyes back to Taarzan The Wonder Bore. Devender Choudhary (Ajay Devgan) is a automobile engineer, whose fabulous new prototype of what looks like a Maruti Esteem, is stolen by a nasty corporate. Devender shakes his fist at the four men who screwed him over only to have his arm twisted further. Next thing he knows he's sinking to the bottom of a pond in his beloved buggy, a family heirloom he calls Taarzan.

Twelve years pass and the interval happens. In the meanwhile, Devender's son grows up to be a garage-mechanic and an unbearable twerp. But his luck changes when he passes a scrap-yard one day and meets his girlfriend (Ayesha Takia). The girlfriend is suitably air-headed and the scrap-yard contains a rusted wreck of a car that Raj recognizes as his dad's old friend.

After much restoration the harmless Ambi turns into the purple monster of revenge. Not unlike Stephen King's hooded heroine Christine. But this one likes to be funny. For example, before it plows the bad guys down, it makes them run and sweat. And this constitutes the 'comic' element of Taarzan The Wonder Car. Whether you will laugh or not depends on your level of substance abuse.

On the face of it - except for that scary title - the movie has a few major things going for it. The directorial duo has delivered hits like Khiladi and Baazigar. The gizmo-car is not half bad and apparently cost the producers 25 million bucks. And the special effects from Denmark didn't come cheap either. Amrish Puri does his bit, Gulshan Grover does his bit, Ajay Devgan does his bit. The movie, in spite of it all, is undiluted bilge. And a female-dog to sit through.

The comedy doesn't work, but it also doesn't quit, which is a paralyzing combination. The audience might have to resort to making their own entertainment - bring your knitting, video games, or Pokemon cards. The makers claim this is a children's movie, but it completely lacks that essential magic. The only reason you'd be tempted to take the little 'uns to watch Taarzan The Wonder Car is if you, like Calvin's dad, believe that episodes of crippling boredom build character. In which case, the joke's on you, pal.