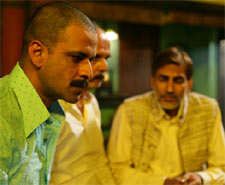 Nupur Barua / fullhyd.com
EDITOR RATING
6.0
Performances
Script
Music/Soundtrack
Visuals
8.0
5.0
7.0
8.0
Suggestions
Can watch again
Yes
Good for kids
No
Good for dates
No
Wait for OTT
No
Anurag Kashyap, in his Director's Note for Gangs Of Wasseypur, admits that the city of Mumbai influenced the way he made his movies, until now. Apparently, when the writer of GOW, Zeishan Quadri (who also plays a role in the movie), narrated some legendary tales of the real Wasseypur, Kashyap was jolted back into remembering his own roots, and decided that he would make a movie that would not only detail the gang wars of the region, but also become so lengthy that he would need to release it in two parts.

Gangs Of Wasseypur is Part 1, then. Wasseypur is now a far-flung suburb of Dhanbad, that was once in Bengal, then became a part of Bihar, and is at present the capital of the coal mining region in the state of Jharkhand. The movie begins with Smriti Irani (then Malhotra) welcoming the camera into her large house - the Wasseypurians are watching Kyunki Saas Bhi Kabhi Bahu Thi, and are rudely interrupted as Sultan (Pankaj Tripathi) leads his gang of trigger-happy men into the alleys of the town. Sultan is on a mission to wipe out Sardar Khan's (Manoj Bajpayee) family.

To understand where it all began, a voice-over by Piyush Mishra goes back to the beginning. There was once a Qureshi, from a family of butchers, who was known far and wide as a terrible dacoit. Enter Shahid Khan (Jaideep Ahlawat), an upstart Pathan, who almost takes over Wasseypur. The Qureshis kick him out, and Shahid becomes a bodyguard for the capitalist Ramadhir Singh (Tigmanshu Dhulia).

Shahid is killed, and Sardar, his son, manages to escape. The boy grows into a man with one only aim - to avenge his father's death. Ramadhir, now a politician, joins hands with the Qureshis, and the Qureshi-Khan war is renewed.

The director is unapologetic in his liberal use of guns, sex and cuss words to take the story forward. The problem lies in the length - almost 3 hours. The first half hour of the film is enough to let you know what lies ahead, and why the gangs want to kill each other. Kashyap, however, decides to meander (and how!) into a journey of self-indulgence, as he goes on and on about just how bad-ass these guys are.

One would be completely lost if there was no voice-over explaining family histories and characters, but even then, the movie goes over your head if you are not paying complete attention.

The language, with a smattering of Bhojpuri-Maithili, adds to the confusion, especially if you are not from the region. This is where the cuss words prove handy - they tell you exactly what emotion a character is portraying. The last half-hour, however, is tightly scripted and executed, and will definitely wake you up from your stupor.

As a whole, Gangs Of Wasseypur is scattered and chaotic, and not compelling enough to be India's answer to The Godfather. However, some of the sequences are gems in the history of Indian cinema. Take, for example, the scene in which Sardar's wife beats the living daylights out of her husband when she catches him in a whorehouse, or the one in which she beats her son with a broom. Then, there are reminders of what the 1980s and 1990s were all about - men who could sing like women, and Mithun and Amitabh impersonators for hire, amongst others. The themes of revenge and hate are balanced by plenty of humour, and some attempts at peacekeeping.

The biggest glitch in the movie is the erratic aging of the characters. The story begins in the 1940s, and ends in the 1990s, but nobody looks like they have aged more than 10 years. The director makes up for this by stunning videography and smart camerawork. He does not pay too much attention, unfortunately, to authenticating costume and production design according to the various periods that he has depicted - Ambassador cars and red telephones are not sufficient to illustrate an era.

Sneha Khanwalkar, of MTV's Sound Trippin' fame, has given the movie some great music. All the songs are catchy, but Keh Ke Lunga and Bihar Ka Lala are definite chartbusters.

In a movie that has no known names as actors, except Manoj Bajpayee, every actor is a star. Richa Chhada is a treat to watch. Reema Sen shows more of her back than her face, but she handles her character well. Huma Qureshi seems a little too urban for a place like Wasseypur, but she makes up for it with her dialogue delivery.

Vipin Sharma is unexploited, but he manages to create a small impression. Piyush Mishra is more prominent as the narrator than as an actor. Jaideep Ahlawat does a great job in his relatively smaller role.

The movie belongs to 3 actors - Manoj Bajpayee, Tigmanshu Dhulia and Nawazuddin Siddiqui. Bajpayee plays a goofy gangster, who may be a merciless killer, but is a complete romantic at heart who just cannot contain his lust. Nawazuddin Siddiqui appears late in the movie, but you instantly know that his character, a dopehead and Bachchan fan, is going to be the star attraction in the second part.

The surprise item is Tigmanshu Dhulia, best known as a director (Paan Singh Tomar). He is a menacing villain, without eccentricities and fancy dialogues.

In all, Gangs Of Wasseypur is a good watch, despite its length and confusing plots, mostly for the performances and the actors. Also, the sequel, whenever it is released, promises to answer all the questions that the first part posed, if you have the patience.
Share. Save. Connect.
Tweet
GANGS OF WASSEYPUR SNAPSHOT 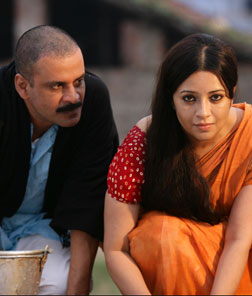 ADVERTISEMENT
This page was tagged for
gangs of wasseypur movie
gangs of wasseypur 3 movie in hindi
Gangs Of Wasseypur hindi movie
Gangs Of Wasseypur reviews
release date
Follow @fullhyderabad
Follow fullhyd.com on
About Hyderabad
The Hyderabad Community
Improve fullhyd.com
More
Our Other Local Guides
Our other sites
© Copyright 1999-2009 LRR Technologies (Hyderabad), Pvt Ltd. All rights reserved. fullhyd, fullhyderabad, Welcome To The Neighbourhood are trademarks of LRR Technologies (Hyderabad) Pvt Ltd. The textual, graphic, audio and audiovisual material in this site is protected by copyright law. You may not copy, distribute, or use this material except as necessary for your personal, non-commercial use. Any trademarks are the properties of their respective owners. More on Hyderabad, India. Jobs in Hyderabad.