Deepa Garimella / fullhyd.com
EDITOR RATING
6.5
Performances
Script
Music/Soundtrack
Visuals
8.5
6.5
7.0
8.0
Suggestions
Can watch again
Yes
Good for kids
No
Good for dates
Yes
Wait to rent it
Yes
Mem Vayasuku Vacham smacks so much of conviction that you ignore, for the 2 hours 45 minutes that it runs, that it defies several conventions hard-coded into the Telugu cinema industry of the 21st century.

It's not simply that it doesn't feature stars, or that it doesn't rely on slapstick comedy. Fact is that MVV fearlessly talks about a love affair that didn't exactly end up the way our films have always imagined for us, and that is almost blasphemy. There are reasons (aside from the poor marketing) why this film may not do great commercially, but there's no denying that it's a good movie.

This campus romance starts off with a young bride, Khushi, weeping on a bench on Pondicherry's sea shore, and a concerned stranger (Bhagya Raj) being let in on her story. But what unfolds isn't Khushi's flashback as much as it is the story of Lucky (Tanish), a seemingly immature 20-something who started wooing Khushi the moment he set his eyes on her. As it turns out, Lucky is no reckless roadside Romeo, but in fact, a man, who does have what separates the men from the boys - baggage.

MVV is a film helmed by someone with a great vision - both of the emotional journey within the story, and of the product. The story is plain and simple, but it is the nuances that are a pleasure to touch and feel. When the director takes you back to Lucky's college-going days, what you expect is a mindless bubble-gummy melange of colour and raging hormones.

Until the film brings you back down to reality (or at least somewhere close), where hormones do rage but in a more toned-down way. Where teenagers are reckless and yet mature, in a very perplexing way. Where a woman can wear a salwar-kameez (not the designer kinds) and not thigh-high skirts, and still be desirable enough to be the heroine of her story.

The characters are pretty life-like, especially the burkha-clad Dilruba. Although MVV barely skims the surface of unrequited love (Lucky aggressively courts her even though she repeatedly, and politely, tells him she has no feelings for him, but eventually they do get together - the kind of thing that happens to only about 5% of people out there), it's interesting to see the trajectory that the couple goes through. Lucky, in particular, is given a fleshed-out emotional curve. And interestingly, not once is religion invoked in the plot, despite the posters screaming out the obvious cultural obstacles. Then again, maybe that would have overcomplicated the plot.

Also, there's an unnecessary elopement sequence that ruins the mood of the film, and makes you wonder why the hell you must root for these filmi kids with flawed choices. But the movie is a tasteful portrayal of what is essentially a plain old story, and the well-written dialogues help.

Tanish may have finally gotten a real break. He isn't in physical form yet to take on the tough heroes, but he does have a mature look, and an improved diction. What our filmmakers tend to forget is that all films don't have to be starry high-decibel entertainers. College romances are a niche that rarely fail if you get the basics right, and there are enough youngsters like Tanish who fit into them.

Both the girls are good. Madalsa Sharma is pretty to look at, and very spunky. Neeti Taylor, a new find, is nice face who could do with lessons in lip sync. Overall, it's a cast put together well.

The local setting and culture is authentically portrayed. While Rama Prabha's (who plays Dilruba's grandmother) Telugufied Hyderabadi Hindi is sometimes embarrassing, the makers try to maintain creative integrity throughout. The Hyderabadi setting and culture, in general, is refreshing to watch. The camera work is also classy in places.

A good background score and hummable songs complete the picture. Overall, we'd have recommend MVV harder if it were closer to perfection, but we'd still recommend it now, since it is a "youthful entertainer" that actually is.
Share. Save. Connect.
Tweet
MEM VAYASUKU VACHAM SNAPSHOT 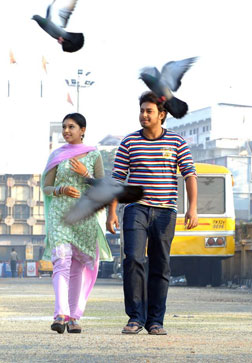 ADVERTISEMENT
This page was tagged for
memu vayasuku vacham movie ringtones
mem vayasuku vacham movie movies language:en
Naa move telgu
memu vayasuku vacham telugu movie songs
Mem Vayasuku Vacham Telugu movie come
Follow @fullhyderabad
Follow fullhyd.com on
About Hyderabad
The Hyderabad Community
Improve fullhyd.com
More
Our Other Local Guides
Our other sites
© Copyright 1999-2009 LRR Technologies (Hyderabad), Pvt Ltd. All rights reserved. fullhyd, fullhyderabad, Welcome To The Neighbourhood are trademarks of LRR Technologies (Hyderabad) Pvt Ltd. The textual, graphic, audio and audiovisual material in this site is protected by copyright law. You may not copy, distribute, or use this material except as necessary for your personal, non-commercial use. Any trademarks are the properties of their respective owners. More on Hyderabad, India. Jobs in Hyderabad.