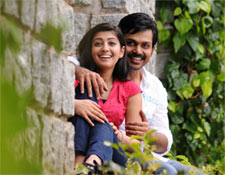 Deepa Garimella / fullhyd.com
EDITOR RATING
6.0
Performances
Script
Music/Soundtrack
Visuals
8.0
5.0
5.0
6.5
Suggestions
Can watch again
No
Good for kids
No
Good for dates
Yes
Wait to rent it
Yes
What can you learn from Shakuni that 45,67,539 Telugu/Tamil movies have not taught you? Err... nothing. But this non-serious "political thriller" is actually fun once you get past the fact that it's not an earth-shatteringly different film.

Shakuni is too breezy to be called heavy-sounding names like "political" and "thriller", but has too much of the political stuff to be called a regular movie. And even though the broad plot-line does not impress, the little twists that take the movie forward prove to be rather entertaining.

Kamal Krishna (Karthi) is in Hyderabad (or Chennai, or whatever) to meet the railway minister, to ask him to stop his ancestral home in Samarlakota from being mowed down by a greedy developer. However, he quickly realizes that help is nowhere at hand. After a meeting with the CM (Prakash Raj) shows him the selfishness and uselessness of those in power, he looks for a way out.

From launching obscure local leaders into full-blown mayoral action, to pulling jailed leaders out of political oblivion, Kamal/Krishna manipulates his way through the system in order to get what he otherwise seems incapable of getting.

First up, be prepared for a lot of Tamil nativity (not the rural kinds, but the general appearance of people and their dressing, and the baffling desire of Telugu dubbing artistes to give their voices a Tamil accent). The makers have tried to make this a bilingual and work in some images of Hyderabad into the script, but it's definitely not the real thing.

The movie fools around on shaky ground for the first half. Karthi and Santhanam (who plays Kamal's autodriver sidekick) talk loudly and exchange wisecracks for some time, Anushka walks in and out of a cameo, and the leading lady is introduced in an unromantic love track - all mildly entertaining events.

However, it picks up pace in the second half, and everything else is pushed out of focus. Karthi becomes doubly important to the film, and as his character plays around with the unsuspecting lawmakers, you cannot but watch with interest. Kamal manipulates without being self-righteous or overbearing. Interestingly enough, there are only about 2-3 physical fights in the movie, and very little blood is shed.

Karthi is the DNA of the movie, and brings his usual childlike charm to the role. Santhanam seems to be enjoyable company to hang around with. Pranitha has nothing to do. Aside of Karthi, Prakash Raj, Kota Srinivasa Rao and Radhika are a pleasure to watch.

The visuals are clean and bright, though far from being works of art. And G V Prakash Kumar's music is over-the-top, save for the Sonu Nigam song.

In all, Shakuni is a film you can stumble upon and not feel terrible about.
Share. Save. Connect.
Tweet
SHAKUNI SNAPSHOT 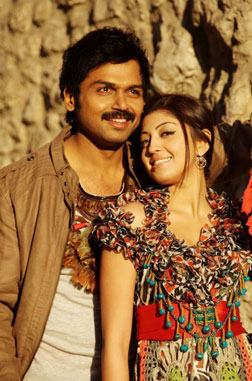 ADVERTISEMENT
This page was tagged for
Shakuni Telugu movie download movierulz
Shakuni tealgu move downalod
shakuni movie download movierulz
sakuni telugu movie in movierulz
naa rockers shakuni movie
Follow @fullhyderabad
Follow fullhyd.com on
About Hyderabad
The Hyderabad Community
Improve fullhyd.com
More
Our Other Local Guides
Our other sites
© Copyright 1999-2009 LRR Technologies (Hyderabad), Pvt Ltd. All rights reserved. fullhyd, fullhyderabad, Welcome To The Neighbourhood are trademarks of LRR Technologies (Hyderabad) Pvt Ltd. The textual, graphic, audio and audiovisual material in this site is protected by copyright law. You may not copy, distribute, or use this material except as necessary for your personal, non-commercial use. Any trademarks are the properties of their respective owners. More on Hyderabad, India. Jobs in Hyderabad.