Shruthi / fullhyd.com
EDITOR RATING
6.5
Performances
Script
Music/Soundtrack
Visuals
8.0
6.0
7.0
6.0
Suggestions
Can watch again
No
Good for kids
No
Good for dates
Yes
Wait to rent it
No
Rock of Ages, it'd be pretty reasonable to say, is Tom Cruise all the way. Right from when he rises from a pile of women with a flashy animal head at his crotch for a belt, and thong-style leather pants, to when he signs off - it hard to see beyond him. Sure, there's the music, a nice little romance and many clichéd characters and events, but really, it's Tom Cruise that you will be waiting to see all throughout.

And then there's that music -- never letting go, filling up the movie as its characters break into song-and-dance routines almost every other minute - lending it the feel of a fantasy musical.

The story goes like this. Sherrie Christian (Julianne Hough) sets out from Oklahoma to pursue her Hollywood dreams. This is probably the most clichéd of beginnings, and just when you are about to yawn, she starts singing, and so does everyone else on the bus, thus setting the stage for what you can expect throughout the movie - a whole lot of rock anthems without as much as a legitimate turn of events in between.

Early on, Sherrie meets Drew Boley (Diego Boneta), who gets her a job at the famous Bourbon Room and also promptly falls in love with her. Then starts a romance and a misunderstanding, both of which weave in and out of the other plot of the movie.

On a parallel note, Bourbon's manager Dennis Dupree (Alec Baldwin, completely wasted in an utterly predictable role), and his assistant Lonny (Russel Brand), are struggling to save it from going out of business. To make matters worse, the mayor's wife, Patricia Whitmore (Catherine Zeta Jones), has taken it upon herself to rid the city of rock and roll. Bourbon's only chance at survival is a jig that Arsenal, a band fronted by a rock star Stacee Jaxx (Tom Cruise), is set to do at the club.

It's really the unoriginality of the movie that makes it hard to love. The movie lacks the intensity that could either have made it a great musical or a good comedy. The characters try so hard to fit into the stereotype that there's no room left for anything fresh and new about them. And the music, although good, can't compensate for a complete lack of attention to the storyline

Tom Cruise - playing the self-centered, pseudo philosophical and full-of-himself Stacee Jaxx - is utterly believable and endearing. And it's hard to take your eyes off him, as he effortlessly spins his tale of alcohol, women and music.

There's also Catherine Zeta Jones, who goes over the top (and justifiably so) as the outraged Patricia Whitmore, with a mission to clean up the strip. Although a tad bit underused, she's a treat to watch. Russel Brand, easy on the eye and with a nice little role, is cute, and doesn't bore.

The music's not too bad either. The soundtrack features some of the 80's hit numbers (like Don't Stop Believin' and We're Not Gonna Take It). The songs mostly come in with the actors breaking into them quite easily - in the street, on a bus, or right in middle of a club.

But for Tom Cruise, the movie falls flat and doesn't inspire any real sense of entertainment. The few flashes of good entertainment quickly make way for an insipid plot and predictably-sketched characters. And as a final straw, the visual settings of dark clubs fails to impress.

If you are Tom Cruise fan, watch it. If you don't mind the mediocre, watch it. But if are waiting to be swayed by a superbly done musical, don't choose this one. This is no Chicago.
Share. Save. Connect.
Tweet
ROCK OF AGES SNAPSHOT 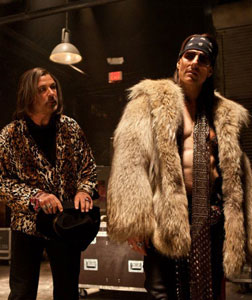 ADVERTISEMENT
This page was tagged for
Rock Of Ages english movie
Rock Of Ages reviews
release date
Tom Cruise, Julianne Hough
theatres list
Follow @fullhyderabad
Follow fullhyd.com on
About Hyderabad
The Hyderabad Community
Improve fullhyd.com
More
Our Other Local Guides
Our other sites
© Copyright 1999-2009 LRR Technologies (Hyderabad), Pvt Ltd. All rights reserved. fullhyd, fullhyderabad, Welcome To The Neighbourhood are trademarks of LRR Technologies (Hyderabad) Pvt Ltd. The textual, graphic, audio and audiovisual material in this site is protected by copyright law. You may not copy, distribute, or use this material except as necessary for your personal, non-commercial use. Any trademarks are the properties of their respective owners. More on Hyderabad, India. Jobs in Hyderabad.