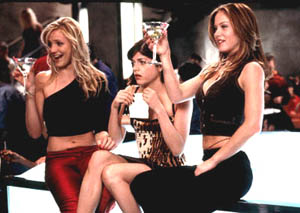 Avinash Tadimalla / fullhyd.com
EDITOR RATING
5.0
Performances
Script
Music/Soundtrack
Visuals
NA
NA
NA
NA
Suggestions
Can watch again
NA
Good for kids
NA
Good for dates
NA
Wait to rent it
NA
Apparently, there is a prevailing line of thought in Hollywood that vulgarity equates to humor. Bodily fluids mean uncontrollable laughter. This is, of course, the mentality of an eight-year-old boy, so that effectively pigeonholes the intellectual level of the average Hollywood producer. Not to deride every gross-out comedy, but something like "The Sweetest Thing" reminds us that few things are less appealing than a comedy where intoxication is mandatory to stimulate laughter. (Okay, don't see this movie unless you're drunk or stoned.)

Trying perhaps a little too hard to prove women can be every bit as bawdy as men, "The Sweetest Thing" is a raunchy romantic comedy in the There's Something About Mary vein, focused on a female protagonist. Sexy and bold Christina Walters (Cameron Diaz), after years of avoiding meaningful relationships with men, unexpectedly meets her perfect match (Thomas Jane) one night while hanging out with best girlfriends Courtney (Christina Applegate) and Jane (Selma Blair).

When she finds out the next morning that he's suddenly left town, she and Courtney set out to find him on a wild road trip, encountering a series of hilarious, or so we're asked to believe, misadventures on their journey. Their search ultimately leads them to a surprising discovery and the realization that love is, after all, the sweetest thing.

The comedy has its moments, although they are too few to be satisfying, and the script does its best to push the envelope out with a lot of sophomoric humor that I will pass over here because some of the gags (no pun intended) have to be seen to be believed.

As the blond, fun-loving Christina Walters, Diaz leaves men crying in her wake. We meet them after they've been dumped. Shell-shocked and insecure, they wonder why she never called and what went wrong -- which is a welcome change from the way women are depicted in magazines and movies every day. Diaz is certainly the focal point of the film, and plays her part well. As the female lead's best friends, Christina Applegate ("Just Visiting", "Jane Austin's Mafia!") and Selma Blair ("Legally Blonde", "Cruel Intentions") are okay, but suffer from shallowly developed characters.

For all its attempts to balance the risqué and the romantic, "The Sweetest Thing" has little to say on the subject of love. Its sincere side seems to have been left on the cutting room floor along with a whole slew of other story elements. Part way through the film, for example, Applegate gets a long-term boyfriend, who turns up for 30 seconds before disappearing completely. It doesn't take long into the film before one is apt to realize that the cast and crew simply want to make a silly and adult romantic comedy, have fun while doing so, and invite viewers along for the ride. In that regard, the film certainly succeeds on its own, distinct level.

If you are looking for elegant acting, and a strong plot, then most of the movie is as dead as a blind date with a corpse. Ultimately, though, the overriding effect of watching these actresses debase themselves is the cinematic equivalent of a motorway car wreck... it's horrific, but you want to see if anyone will escape unscathed. All it proves is that sometimes girls are just as dumb (but certainly no dumber) than the boys. Regardless of how you look at it, there's something sour about The Sweetest Thing. So watch it if you must, but it's your call.
Share. Save. Connect.
Tweet
THE SWEETEST THING SNAPSHOT

ADVERTISEMENT
This page was tagged for
The Sweetest Thing english movie
The Sweetest Thing reviews
release date
Cameron Diaz, Christina Applegate
theatres list
Follow @fullhyderabad
Follow fullhyd.com on
About Hyderabad
The Hyderabad Community
Improve fullhyd.com
More
Our Other Local Guides
Our other sites
© Copyright 1999-2009 LRR Technologies (Hyderabad), Pvt Ltd. All rights reserved. fullhyd, fullhyderabad, Welcome To The Neighbourhood are trademarks of LRR Technologies (Hyderabad) Pvt Ltd. The textual, graphic, audio and audiovisual material in this site is protected by copyright law. You may not copy, distribute, or use this material except as necessary for your personal, non-commercial use. Any trademarks are the properties of their respective owners. More on Hyderabad, India. Jobs in Hyderabad.