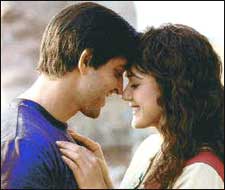 Deepa Menon / fullhyd.com
EDITOR RATING
6.0
Performances
Script
Music/Soundtrack
Visuals
NA
NA
NA
NA
Suggestions
Can watch again
NA
Good for kids
NA
Good for dates
NA
Wait to rent it
NA
On the whole, taken all around, it's better if the world expects nothing from you. Earlier nobody knew Javed Akhtar had a son who could make movies. Part of the reason for Dil Chahta Hai's major success was that it started off as just another film. Lakshya, however, is not as lucky. It arrives with a lot of baggage. We went to meet it at the gate, hopefully, and were disappointed. Not least of all by the strange hairstyles.

Akhtar tries to do too much with three (yes, three) hours of reel, and ends up diluting the punch (punch intended). In effect, there is no punch, no zing, no mood in particular that you're left with after the movie.

The film starts off one day in the life of a nimrod (Hrithik Roshan). We might call him names, but Karan is a sweet chap and like most college students, he is clueless about the rest of his life. So we begin with a depiction of confusion, angst and general frustration over a world trying to pigeonhole a free spirit. This is the good bit, as you recognize with sickening clarity those parental lectures about your plans for 'the future'.

If there's one thing everybody, including his girlfriend and partner in hair-crime Romila (Preity Zinta), knows about Karan it's that all he needs is a goal in life. So to show 'em all - especially his father - Karan runs off and joins the army. But because he's there for all the wrong reasons, the only thing he succeeds in doing is making a royal ass of himself.

After an inglorious start, Karan decides he's had enough and returns home. His father is, sadly, not surprised at all, but his girlfriend is disgusted, and she dumps him. As he sits in the park and cries, Hrithik looks every bit the awfully young boy he's playing. But it's after this point that the movie lapses into the first of its many clichés, by sending him back to the army and turning him into a boy scout overnight. And things suddenly stop being any fun at all.

What starts off as a potentially interesting account of a rite-of-passage, is then lost in a war movie of sorts. We know that the confused young boy is being transformed into a resolved young man, but we can't see him for all the gunfire. Set during the Kargil conflict, Lakshya takes you to the LoC, where Karan's regiment is posted, under the guidance of Damle (Amitabh Bachchan looking every bit the old, untiring soldier he is).

The war terrain is barren, windswept and dangerous (of course), but strangely you can't taste the threat. Lakshya tells you the story of men who put their lives on the line and women who report news as it happens, but their world is painted in such clean, almost sterile tones that you have trouble believing there's actual sweat, blood and death happening around them. Preity Zinta is too placid, and perfectly put together to be the hard-nosed scribe she's playing. Scruffy hair and handloom dupattas do not a credible journalist make.

In the meanwhile, Karan finds his goal - the hoisting of the tiranga on a captured Indian peak. After we lost sight of him at the start of the war, he shows up again in all his vulnerability and trembling earnestness. Hrithik does a good job of this, and the combat scenes he encounters are shot very well.

As before, Farhan Akhtar's strength is his treatment of relationships, and the one between Karan and Romila is handled with complete maturity. Javed Akhtar's characters are understated and good; their dialogues, however, are far from inspired. You feel like you've heard it all before. We expected bigger, better things from Lakshya; and perhaps that's what tips the scales against it.
Share. Save. Connect.
Tweet
LAKSHYA SNAPSHOT

the casts are also not hero oriented and the story doesnot revolves around one character but all are involved.

ADVERTISEMENT
This page was tagged for
lakshya movie management review
Lakshya hindi movie
Lakshya reviews
release date
Amitabh Bachchan, Hrithik Roshan
Follow @fullhyderabad
Follow fullhyd.com on
About Hyderabad
The Hyderabad Community
Improve fullhyd.com
More
Our Other Local Guides
Our other sites
© Copyright 1999-2009 LRR Technologies (Hyderabad), Pvt Ltd. All rights reserved. fullhyd, fullhyderabad, Welcome To The Neighbourhood are trademarks of LRR Technologies (Hyderabad) Pvt Ltd. The textual, graphic, audio and audiovisual material in this site is protected by copyright law. You may not copy, distribute, or use this material except as necessary for your personal, non-commercial use. Any trademarks are the properties of their respective owners. More on Hyderabad, India. Jobs in Hyderabad.