Nupur Barua / fullhyd.com
EDITOR RATING
4.0
Performances
Script
Music/Soundtrack
Visuals
5.0
3.0
5.0
6.0
Suggestions
Can watch again
No
Good for kids
No
Good for dates
No
Wait to rent it
No
Once upon a time, there was an earthquake that caused the floor of a lake to split. And through that seismic crack entered what was later identified as a group of prehistoric piranhas. All of that happened in the first movie, Piranha 3D, which went on to become a hit with its blood, violence, and skin show. The heroes of that movie thought they had killed almost all the piranhas, but they were wrong. The dead fish were just the babies, and the parents were somewhere in the deep blue waters, awaiting their turn at cannibalism.

Which is why there is Piranha 3DD, the official sequel. It has been a year since the tragedy at Lake Victoria, and the water body is now off-limits. The town that thrived on tourism and Spring Break groups of half-nude partying teenagers is now a sad little place.

Enter Maddy (Danielle Panabaker), a student of marine biology, who is home for the summers. She discovers, to her horror, that her rather sleazy step-father, Chet (David Koechner), has converted a large section of the water-park (of which she is a co-owner) into an adult-themed division with strippers and a celebrity lifeguard (David Hasselhoff).

Maddy and her friend Shelby (Katrina Bowden) are almost eaten alive by a swarm of piranhas at the lake, but they manage a narrow escape. Mr. Goodman (Christopher Lloyd), somewhat of an expert of these killer fish, tells the girls that the piranhas are travelling through sewage pipes and rivers, and that their numbers are spreading over a large area.

Maddy immediately tries to shut down the water-park, once she realises that the river is connected to the place. Chet refuses, and goes ahead with his grand inauguration anyway.

Piranha 3DD is a part of the genre called 'horror-comedy', which includes zombie films. Unfortunately for this movie, the horror is a let-down, and there are no surprises, unless you count the part where a piranha works its way into a girl's body and bites the penis of her boyfriend when they are making love. With the absence of real terror, visually or otherwise, the film is unintentionally funny, and ridiculous. In fact, after a point, even the amusement fades.

It is definitely an adult movie, however, and there is a reason for the double "D". Shot mostly in 3D, the visuals fail to make an impact, and it does not help that it is unusually dark (as far as lighting is concerned) for a summer movie that has plenty of water and colourful bikinis. The story is predictable, with more than its share of ho-hum moments, but it has a rhythm - every sequence leads to a piranha attack, or the discovery of what these monsters can do.

It is the hamming that keeps the movie alive. David Hasselhoff, for example, parodies himself (from Baywatch) as the lifeguard who is so full of himself that he cannot be bothered with saving lives. David Koechner overdoes his sleazy, furtive act, and you know immediately where he is going to end up.

Ving Rhames and Paul Scheer are the leftovers, literally, of the first movie, and they do their bit, having hammed enough in Piranha 3D. Their small roles may remind you a bit of Tarantino's actors in his zombie films.

Christopher Lloyd, who is another familiar face in the (dare we say it?) franchise, is excellent with his role. He has always played the crazed professor and other similar roles (think Back To The Future), and he does not disappoint.

Danielle Panabaker is relatively sincere in her portrayal of the girl-next-door who may just save hundreds of lives with her faith and presence of mind, but she does not add much to the film. The real attraction in the movie is the unending supply of women in bikinis, and a few young men with spectacular physiques.

It does not matter if you have not watched Piranha 3D - actually it does not matter if you have - Piranha 3DD is a howler, and we mean that in the nicest way possible. It is an attempt to revive the horror-comedy genre that was popular in the 1990s, and you must watch it if you are a fan of B-grade horror that tries to cover up its flaws with naked women and ridiculously conventional dialogues. Remember, this is no Jaws, but you may be put off water (and fishing) for a while.
Share. Save. Connect.
Tweet
PIRANHA 3DD (TELUGU) SNAPSHOT 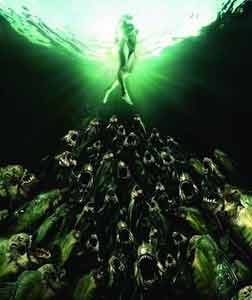 ADVERTISEMENT
This page was tagged for
pirana movie download telugu
pirana movie download movierulz lt
pirana3d full move in telugu download
piranha 3d telugu hd movie
Piranha movie HD full Telugu
Follow @fullhyderabad
Follow fullhyd.com on
About Hyderabad
The Hyderabad Community
Improve fullhyd.com
More
Our Other Local Guides
Our other sites
© Copyright 1999-2009 LRR Technologies (Hyderabad), Pvt Ltd. All rights reserved. fullhyd, fullhyderabad, Welcome To The Neighbourhood are trademarks of LRR Technologies (Hyderabad) Pvt Ltd. The textual, graphic, audio and audiovisual material in this site is protected by copyright law. You may not copy, distribute, or use this material except as necessary for your personal, non-commercial use. Any trademarks are the properties of their respective owners. More on Hyderabad, India. Jobs in Hyderabad.