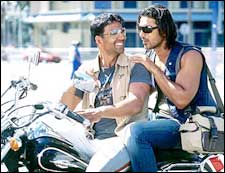 Priyanka Pulla / fullhyd.com
EDITOR RATING
7.0
Performances
Script
Music/Soundtrack
Visuals
NA
NA
NA
NA
Suggestions
Can watch again
NA
Good for kids
NA
Good for dates
NA
Wait to rent it
NA
With Garam Masala, the philandering skirt-chaser officially becomes synonymous with comic-premise in Bollywood comedies. If Johnny Lever on the screen made you spurt out a snicker even before he said something funny, Hindi movie track records will now ensure that the first shot of the Casanova will make the edges of your lips curl in gurgling anticipation. The equation now is: Womanizer = Funny. Womanizer with two girlfriends = Funnier. From the principal of mathematical induction, it is can therefore be deduced that Womanizer with n girl friends = n times as Funny. For Garam Masala, the golden number is 4.

Well, the number of women hardly matters at all. They are usually of the same shape, size, build and hair, and carry purses of a different fluorescent shade. It's the men who anchor the various histrionics around them. Like the axle of a merry-go-round, they stand proud, tall and sturdy while the women go "wheeeeeeeeeeeeeeee" being whisked around by them.

So the horse-riders on the merry-go-round in this movie are Deepti (Daisy Bopanna), Pooja (Nargis) and Sweety (Neetu Chandran). And the axles are Makarand/Mac (Akshay Kumar) and Shyam/Sam (John Abraham). Anjali (Rimi Sen) is the watcher, looking on desolately as the players have their blowout on the ride. Caught in the speeding horses, being constantly knocked and toppled over by them, while stupidly trying to walk on the platform of the ride, are Mambo (Paresh Rawal) and Babban (Rajpal Yadav).

Stories such as this have been born and have been butchered to death at the hands of critics, even if they are unfailing hits with audiences. But this one comes embattled with the redoubtable presence of Akshay Kumar and John Abraham. While John is still finding his baby teeth with comedy, his delicious grin and rock-star hair don't hurt. But if anybody could carry off the role of a sneaky swinger, it is Akshay Kumar of the gummy grin, gruff speech, upturned collar and undone top button. There is nobody in the world more convincing than Akshay when he bumps into a lassie on the road and breaks into that tremendously smug and roguish grin.

And who better to seem like a master-flirt that someone who is cut like John Abraham? He wriggles his shoulders, whisks back his hair and throws a lopsided grin, and you are ready to whistle.

Well, Mac and Sam are two photographers who manage to find flimsily-dressed women to focus on even during inauguration ceremonies by politicians. They drive their boss (Viju Khote) up the wall with their single-minded devotion to skirts and their negative skills in photography. But they are good at plagiarizing and generally being crafty, and so Sam manages to win an international prize by swiping someone else's work.

Mac is pissed at off at being outmaneuvered in his own game by Sam, and decides to teach him a lesson by taking on three fiancées. While he already has a fourth i. e. Anjali (Rimi Sen). The three beauts are conveniently airhostesses so that their schedules can be managed by Mac and they can be nicknamed after their flights (Mumbaiwaali flight, Singaporewaali flight, Bangkokwaali flight). Mambo (Paresh Rawal) is roped in to cook and clean after all four while Sam joins into the theatricals once he finds out. Soon Mac doesn't object anymore, since he is finding it tough to juggle the three women anyway.

The girls are all as pretty as a bunch of skittles (those little bowling pin like things you knock-over), so similar do they look. While Mambo's role is a little unnecessary and overdone, there is a point when the actor is way beyond the script. So you don't judge Rawal.

The music in the movie is catchy and thankfully not of the homogenous remixy grade. 'Dil Samundar', shot on one of the beaches (Mauritius, Australia, Andamans, whatever), is a groovy, hip-swaying number that is picturized well with Akshay's gymnastics and the three girls dancing away in the sun around him.

Well, actually not just the song, but the whole movie is topsy-turvy, slaphappy, sunny and fun. You will enjoy the pretty faces, the politically incorrect humor, and the snappy dialogues. It's just two hours of mindless fun; forget scripts, plots and logic. This one actually has a conspicuously absent story, but as long as Akshay Kumar executes the lack of a script, who cares?
Share. Save. Connect.
Tweet
GARAM MASALA SNAPSHOT

ADVERTISEMENT
This page was tagged for
Garam Masala hindi movie
Garam Masala reviews
release date
Akshay Kumar, John Abraham
theatres list
Follow @fullhyderabad
Follow fullhyd.com on
About Hyderabad
The Hyderabad Community
Improve fullhyd.com
More
Our Other Local Guides
Our other sites
© Copyright 1999-2009 LRR Technologies (Hyderabad), Pvt Ltd. All rights reserved. fullhyd, fullhyderabad, Welcome To The Neighbourhood are trademarks of LRR Technologies (Hyderabad) Pvt Ltd. The textual, graphic, audio and audiovisual material in this site is protected by copyright law. You may not copy, distribute, or use this material except as necessary for your personal, non-commercial use. Any trademarks are the properties of their respective owners. More on Hyderabad, India. Jobs in Hyderabad.