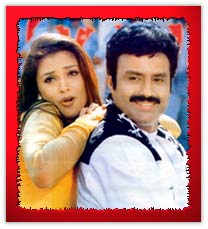 RSA / fullhyd.com
EDITOR RATING
7.5
Performances
Script
Music/Soundtrack
Visuals
NA
NA
NA
NA
Suggestions
Can watch again
NA
Good for kids
NA
Good for dates
NA
Wait for OTT
NA
First released around one and half years ago, it went on to become the year's biggest hit. The film is based on the Rayalaseema's faction culture and is loaded with rabble-rousing dialogues. The biggest strength of the film is its script that has action and sentiments in the right combination.
Sangeetha (Sangeetha) and her two sisters live with their cruel aunt (Jayachitra), who runs a petty hotel. Abbulu (Balakrishna) joins their hotel as an employee, and later tells Sangeetha that he is their brother, Vasu, who ran away in childhood. He solves all their problems and romances with Simran. Veera Raghava Reddy is an amputated Rayalaseema don, who is seeking revenge on Samarasimha Reddy (Balakrishna). When his sons fail, he sends his daughter Anjali (Anjala Jhaveri) to destroy Samarasimha Reddy.
In the process she reveals that Vasu is actually Samarasimha Reddy, the person who has killed Vasu. To prove his love for Vasu's sisters, Anjali challenges him to drink poison and Samarasimha lands in a hospital. Satyanarayana, a Superintendent of Police, reveals the true story of Samarasimha Reddy. Veera Raghava Reddy kills Samarasimha Reddy's parents, sister, brother-in-law and his fiancee (Sanghavi).
To settle scores, Samarsimha severs Veera Raghava Reddy's legs and his left arm. In the fight Samarasimha Reddy accidentally kills Vasu (Pruthvi), his Man Friday, and hence he assumes Vasu's role to discharge his duties as a brother. Learning this, Anjali repents for her actions. Samarasimha accepts the collective decision to marry Anjali to end the feud between the families. After the marriage Veera Raghava Reddy goes back on his words and tries to kill Samarasimha and expectedly he fails. Seeing everyone, including his sons, supporting Samarasimha Reddy, Veera Raghava Reddy commits suicide.
It is interesting to note that the movie was released around the same time as Krishna Vamsi's Anthapuram, which too is based on Rayalaseema's feuds and hence some comparison is inevitable. Unlike Anthapuram, this movie is fraught with divergence towards family sentiments. Though this has been one of the main reasons for the movie's runaway success, as it appeals to the family audiences, it undermines the director's attempts to address the faction culture issue.
Realising this shortcoming, the director at the end speaks a few words as to ways in which the situation can be improved. While Anthapuram truly reflects Krishna Vamsi's didactic approach on the Rayalaseema's feudal psyche, Director B. Gopal ends up using the Rayalaseema factor for commercial gains.
Share. Save. Connect.
Tweet
SAMARASIMHA REDDY SNAPSHOT

ADVERTISEMENT
This page was tagged for
samarasimha reddy movie cost
samarasimha reddy director
Samara Simha Telugu movie
samarasimha reddy telugu full movie in naa
Samrashemhareddy Telugu movie
Follow @fullhyderabad
Follow fullhyd.com on
About Hyderabad
The Hyderabad Community
Improve fullhyd.com
More
Our Other Local Guides
Our other sites
© Copyright 1999-2009 LRR Technologies (Hyderabad), Pvt Ltd. All rights reserved. fullhyd, fullhyderabad, Welcome To The Neighbourhood are trademarks of LRR Technologies (Hyderabad) Pvt Ltd. The textual, graphic, audio and audiovisual material in this site is protected by copyright law. You may not copy, distribute, or use this material except as necessary for your personal, non-commercial use. Any trademarks are the properties of their respective owners. More on Hyderabad, India. Jobs in Hyderabad.