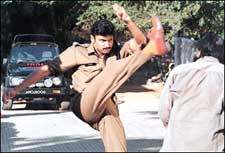 Deepa Garimella / fullhyd.com
EDITOR RATING
2.0
Performances
Script
Music/Soundtrack
Visuals
2.0
3.0
2.0
2.0
Suggestions
Can watch again
No
Good for kids
No
Good for dates
No
Wait for OTT
NA
30 minutes into the film, IPS officer Vijay loses it. He resembles a drunken auto-driver as he laments, in a state of disarray (complete with the flaps of his shirt open), at the injustice of being suspended from work. That must have been the cerebral component of Sumanth's act of signing up this film - that was it, he had definitely lost it.

Sumanth can wear all the unconvincing moustaches and dark glasses he wants to, and generally make himself 'homely-looking' and difficult to recognize, and behave like he has no clue what he's doing in this turkey or why he's in it at all, but he can't cover up the fact that he's in this with all of them - all of them character actors who we thought had hung up their boots long back, but who are apparently living in destitution, seeing as they still require clinkers like these to get by.

For the relentless questioners, this is a cop movie. One shady shuffle later, the ruling party in Hyderabad throws up Satyanarayana and Jayaprakash Reddy as CM and Deputy CM, respectively. Now, the chief concerns of the 3-wived Deputy CM (you read that right - yes, he has 3 wives, all in one house) include protecting the interests of his offspring (important: said offspring killed a woman in broad daylight, in an open market), and those of a brothel owner, and to arrange 13-year-olds for the pleasure of the mantris who come from Delhi.

Anyway, besides conspiring in the above activities, our CM must also save his huge behind, and the huger behinds of others, because a video cassette of him and those others firing guns at one of the above-mentioned 13-year-olds, is dangerously close to public display. And in case there is an honest police officer left in the force (Vijay, of course) who dares to defy them, Deputy CM garu will pour acid in his eyes, or, if push comes to shove, will even hold a remote control to a bomb that will blow up thousands of his own citizens, in front of his own podium.

However, even with corrupt lawyers, stupid policemen, batty politicians and ghastly movies, justice always triumphs. Vijay says so. Only, Vijay also says that if you want money, you can sell your sister, but you should never sell Lady Justice. So a lot of things Vijay says should be taken with a bucket of salt, in the interest of social sanity and cinema-hall-safety.

Coming to the Q&A:

Q: Acid in Vijay's eyes???
A: Yes.
Q: Is his sight restored?
A: Yes.
Q: Whew. How?
A: His grandpa kills himself so he can donate his eyes to Vijay. Then, there's a gory eye-operation on screen, which is the hundredth signal to the audience that they must leave. The seats in the cinema hall were not built for puking on.
Q: What about the romance angle?
A: There was a girl line-marofying Vijay, but Vijay lectures her on how love, and women's reservation, must be earned and not demanded.
Q: Are you trying to tell us that this film is dumb, dizzy and ludicrous?
A: We're just trying to tell you to carry some barf-bags in case you go to watch it.

Now that we're done with the life-saving details, a word about the action scenes - ugh. A word about the dialogues - yuck. We're still building up vocabulary to describe the scenes of Annapoorna and Jayaprakash Reddy, the comedy tracks by M S Narayana and L B Sriram, and the trillion extras who serve less purpose than tattered curtains would - and when we're done, we're not sharing our proprietary knowledge.

ADVERTISEMENT
This page was tagged for
vijay-lpstelugu-film
telugu movie vijay ips
Vijay ips
vijay ips telugu movie
vijayips
Follow @fullhyderabad
Follow fullhyd.com on
About Hyderabad
The Hyderabad Community
Improve fullhyd.com
More
Our Other Local Guides
Our other sites
© Copyright 1999-2009 LRR Technologies (Hyderabad), Pvt Ltd. All rights reserved. fullhyd, fullhyderabad, Welcome To The Neighbourhood are trademarks of LRR Technologies (Hyderabad) Pvt Ltd. The textual, graphic, audio and audiovisual material in this site is protected by copyright law. You may not copy, distribute, or use this material except as necessary for your personal, non-commercial use. Any trademarks are the properties of their respective owners. More on Hyderabad, India. Jobs in Hyderabad.