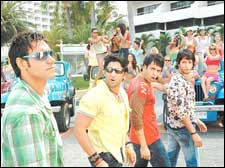 EDITOR RATING
5.0
Performances
Script
Music/Soundtrack
Visuals
NA
NA
NA
NA
Suggestions
Can watch again
NA
Good for kids
NA
Good for dates
NA
Wait for OTT
NA
Watching Golmaal is like being on a treadmill – the film doesn’t move but you keep feeling more and more tired, and you are soon eagerly waiting for the clock to hit the finish time so you can get off. Only, here you are lucky if you don’t lose weight by the end.

That said, it’s hard to narrate the story of Golmaal in 3 sentences. That is because the story of Golmaal is only 2 sentences. Four broke crooks land in the home of a rich blind old couple who stay alone, with one of the four masquerading as the couple’s long-unseen grandson and the others staying quiet. They stay there feeding off and trying to court a beautiful girl next door, until one day the couple finds out, and they apologize and save them from a sudden attack by gang of robbers. Period.

Okay, so we all know story is not everything – it is what happens on screen. Well, what happens on screen is the treadmill. The films shows a few individual attempts by the four to court the girl, and that’s really it. Things do not seem to be going anywhere at any time, there’s nothing you are made to look forward to.

Gopal (Ajay Devgan), Madhav (Arshad Warsi), Laxman (Sharman Joshi) and Lucky (Tusshar Kapoor) are a bunch of crooks - Laxman is the only voice of conscience, but his scruples are constantly reined by the other three. They spot the luxurious house of a blind couple (Paresh Rawal and Sushmita Mukherjee), and overhear a conversation which makes them realize that the couple’s grandchild, in the US, is coming to visit them in a while, and that they haven’t seen him in 22 years.

The foursome then land in the home, with Laxman impersonating as the grandchild and Gopal providing the voice – don’t ask, but it’s funny nevertheless. The other two just stay quiet. They spot Nirali (Rimi Sen) next door, and each tries various tricks to court her for the rest of the movie, with no luck. That’s all. In between, there’s a gangster Babli (Sanjay Mishra) who keeps sending goons to rob the couple, but whose goons unwittingly get beaten up by the four.

The film has its funny moments – you cannot have a full-fledged comedy without some genuine funny parts – but it’s too slow, and most of the comedy tries very hard. Some of the humor is repetitive, like when both Madhav and Laxman try to win Nirali’s affections through dubious means and both are exposed by Gopal, and both then try to hurt him and end up hurting a goon of Babli’s instead.

Also, the humor is not through an elaborate and ingenious plot where several characters’ paths cross unwittingly, tickling you in anticipation even before the actual events happen, but mostly through dialogues and physical comedy. The former category of movies keep you entertained and tickled all through, while the latter make the movie look like a series of jokes and not a film, and so all the jokes have to be good for you to feel like recommending the film.

That is also not helped by the fact that there are too few characters – just the four – most of the time. It’s not like a Rajendra Prasad film of yore with plenty of comic characters with their own special idiosyncrasies all making you laugh. And finally, 4 men vying for the attention of just 1 woman is never a great motivator for audiences – who wants to see people lose their love even in a movie?

The performances are all fine, of course, like in almost all Bollywood films these days. Paresh Rawal seems wasted, especially in a comic film like this. The music is average. On the whole, this is not amongst the best of comedies, and not one that you will see again or eagerly recommend.
Share. Save. Connect.
Tweet
GOLMAAL - FUN UNLIMITED SNAPSHOT

ADVERTISEMENT
This page was tagged for
Golmaal - Fun Unlimited hindi movie
Golmaal - Fun Unlimited reviews
release date
Ajay Devgan, Arshad Warsi
theatres list
Follow @fullhyderabad
Follow fullhyd.com on
About Hyderabad
The Hyderabad Community
Improve fullhyd.com
More
Our Other Local Guides
Our other sites
© Copyright 1999-2009 LRR Technologies (Hyderabad), Pvt Ltd. All rights reserved. fullhyd, fullhyderabad, Welcome To The Neighbourhood are trademarks of LRR Technologies (Hyderabad) Pvt Ltd. The textual, graphic, audio and audiovisual material in this site is protected by copyright law. You may not copy, distribute, or use this material except as necessary for your personal, non-commercial use. Any trademarks are the properties of their respective owners. More on Hyderabad, India. Jobs in Hyderabad.