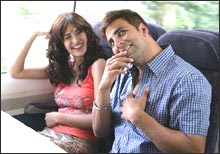 Samrat Sharma / fullhyd.com
EDITOR RATING
6.0
Performances
Script
Music/Soundtrack
Visuals
NA
NA
NA
NA
Suggestions
Can watch again
NA
Good for kids
NA
Good for dates
NA
Wait for OTT
NA
There are two kinds of foreign audience oriented films. One, the kind that panders to the Western perceptions of India and Indian-ism, and the other, the sort that dishes up a pop Punjabi flavor to appeal to the huge NRI community. No prizes for guessing which kind Namastey London is.

That is not to take away from Akshay Kumar's immense appeal here, or the fact that the film remains largely likeable, but the saccharine sweet presentation, the incessant jibes at the firangs, and the quasi-jingoistic desi flavor do lend themselves to a certain manufactured sense of belonging. Whatever the pitfalls, though, the underlying charm of the film is definitely palpable, and considerably more than a little enjoyable.

Akshay's third outing with Vipul Shah is a far cry from their first venture, but thematically a little close to the over-the-top Waqt. Jasmeet "Jazz" Singh (Katrina Kaif) is an NRI girl living in, well, London (duh!), who, as is obviously not Bharatiya culture, drinks and goes out dancing all the time (gasp!). When the son (Upen Patel) of the friend of her father (Rishi Kapoor) goes in for a live-in relationship with his girlfriend (Tiffany Mulheron), all hell breaks loose, and Papa dear packs the family bags to go visit India.

After a string of bad suitors, Papa lands in sadda Punjab and promptly approves of Arjun (Akshay Kumar), a farmer (of course). He then forces Jazz to marry this true blue desi who can barely muster up a smattering of English. Balle-balle, wot?

Not quite, as Jazz is in love with Charlie Brown (Clive Standon), and wants to go marry him in London. Oh, nuts! Arjun has a plan, though. He will make Jazz believe in his true love by helping her. Or something. (Naseer, Ajay, and now Akshay.)

It's not really important what is going on. We all know who is going to get the girl in the end, and we of course all know that Punjab must triumph over the evil, brazen, fornicating London. What is fun here is the in-between moments of breezy humor and light chatty wit that Shah infuses in the film. Gone are the heavy-handed and ham-fisted dialogs of Waqt, and in place is the cheerful mix of Hindi, Punjabi and English, with a light-hearted approach to it all.

That then is the biggest strength of the film. The fast-paced narrative coupled with a truly lively sense of fun that pervade the film make a lot of the audaciously conceived moments seem not so bad, and before you know it, you're having a half-decent time.

This is a romantic comedy by the numbers, though, so there are some moments of self-introspection, and they do slacken the pace a bit, but I guess that is more out of respect for convention than any sense of self-righteousness right in the middle of filming.

Akshay doing a Purab Aur Paschim and a Hum Dil De Chuke Sanam rolled into one would have been a tall order, but for the fact that it is Akshay doing those. His is an effortless charm that fills the screen, and despite the pink-orange pathani suits, and the terrible golden hair, his sense of fun affects you. He is fast becoming a one-man industry, and it is no small part due to the immense charisma he lends to the proceedings.

Katrina looks gorgeous, and freed from the shackles of inevitable dubbing, gives in a performance that suits the theme and pace of the film. It's Rishi Kapoor, though, who manages yet another immensely likeable performance. His India moments are among the funniest in the film; his sense of timing has not been affected by age or scotch.

Despite all the things that work for the film, it still largely remains one of those films where nearly all firangs are descendants of the Raj with a definite snobbishness and a General Dyer hangover, Indians are nice, affable people with values(!), with even the most brazen ones having some sense of Bharatiyata, and the Westerners must get their comeuppance at the hands of a Punjab da puttar or two.

A by-the-books Mera Bharat Mahaan film may still have worked, but it is married to a by-the-books romantic comedy, so all the clichés and the deliberately sugar-coated moments are thrown in for good measure. The result is a film that rides a huge wave of shopworn ideas and set-pieces, eschewing all forms of character development or depth.

Which is why this film works as well as it does, surfing on the shoulders of its affable cast, and a gleeful sense of proceedings - because it doesn't strive for any sort of depth. This is a true popcorn masala film with all the trimmings - the music is by Himesh Reshammiya, for God's sake - and as an entertainer it keeps you occupied with its guffaws and grins. Just don't look beneath the veneer.
Share. Save. Connect.
Tweet
NAMASTEY LONDON SNAPSHOT

ADVERTISEMENT
This page was tagged for
namaste landan movie in hindi 9kmovies
Namastey London hindi movie
Namastey London reviews
release date
Akshay Kumar, Katrina Kaif
Follow @fullhyderabad
Follow fullhyd.com on
About Hyderabad
The Hyderabad Community
Improve fullhyd.com
More
Our Other Local Guides
Our other sites
© Copyright 1999-2009 LRR Technologies (Hyderabad), Pvt Ltd. All rights reserved. fullhyd, fullhyderabad, Welcome To The Neighbourhood are trademarks of LRR Technologies (Hyderabad) Pvt Ltd. The textual, graphic, audio and audiovisual material in this site is protected by copyright law. You may not copy, distribute, or use this material except as necessary for your personal, non-commercial use. Any trademarks are the properties of their respective owners. More on Hyderabad, India. Jobs in Hyderabad.