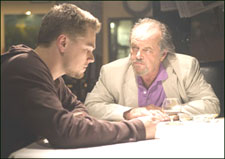 Samrat Sharma / fullhyd.com
EDITOR RATING
9.0
Performances
Script
Music/Soundtrack
Visuals
NA
NA
NA
NA
Suggestions
Can watch again
NA
Good for kids
NA
Good for dates
NA
Wait to rent it
NA
Let's get it out there first: I am a huge Martin Scorsese fan, and really, really enjoyed watching Infernal Affairs (the Hong Kong hit that The Departed is based on, almost plot point to plot point). Despite knowing that Scorsese is great with gangsters (which movie fan does not remember Goodfellas?), and knowing the source material completely, I was completely taken by surprise at how completely amazing this movie is.

Scorsese takes the original material, and while keeping true to a story that he thought deserved to be told again, he fills it with what he does best. The film is full of tension, action, and sudden, brutal violence. But despite that, it is peopled by real, and deep, characters set in a world that is fully realized on celluloid, making this a film that rises above the cardboard cut-out action films that Hollywood churns out.

It's a simple plot really: the police, specifically Special Unit officers Queenan (Martin Sheen) and Dignam (Mark Wahlberg), insert an undercover officer into the organized crime syndicates of Boston, and the crime boss makes his most trusted boy go through rigorous training to join the Massachusetts State Police Department. Soon the police informer, Billy Costigan (Leonardo Dicaprio), is killing and selling drugs on a regular basis, and the crime boss mole, Colin Sullivan (Matt Damon), is excelling at everything and rising fast in the ranks of the department.

As Billy gets close to boss Frank Costello (Jack Nicholson), and Colin strives to earn the respect of his superiors Queenan and Ellerby (Alec Baldwin), they become increasingly aware of each other's existences, and a cat-and-mouse game begins to smoke the other out. This is where the plot becomes oversimplified on paper, but unravels as a complex chess game on screen – and full marks to the cast to play it accordingly.

The center of all this intrigue is Costello, played by Nicholson with unconcealed glee. His is a character that is slowly losing his mind, and while he is a goofy old man when he wants to be, he is also very, very menacing. Nicholson understands that, and plays this character with a vile and dark streak.

DiCaprio plays a character that is tormented by his surrounding violence and undercover stress. He must commit terrible crimes to get close to Costello, and the resulting undercover stress makes him an angry, snappy man. DiCaprio plays a man on the edge to the hilt with pure brilliance. His hard work with Scorsese over the past few years has finally paid off.

Dicaprio is the good guy – but he must suffer through terrible and complex personal ghosts to be the good guy. Damon's character is the exact opposite – he simple needs to sit back in the luxury and success that being a hotshot cop provides, and provide information in phone calls. Damon never lets you forget who the bad guy is here. He is like a snake lying in a park: he is menacing, but the threat is not in his actions, but the implied fear.

Even the supporting characters are so well etched that they are fully realized characters on their own right. Mark Wahlberg is nothing short of a superstar. He gets the best lines in the film, and delivers them with such crackle and pop, that you want him to return every scene. Ray Winstone's sadistic Mr. French is the kind of performance that can engross you on its own.

Scorsese also manages to make these actors gel well together to serve the best balanced cast performance this year. The two leads only share two scenes together, but their performances are almost like they are bouncing ideas off each other. Every character gets its own individual moments, yet the film feels like a complex web unraveling. This makes the final moment's impact nothing short of dynamite.

William Monahan's script has the requisite moments from Infernal Affairs, but the masterful command of the Irish mob scene of Boston that he displays in his script is phenomenal. He has also created a script full of crackling dialog, and long after you come out of the theater, you are paraphrasing the film's lines. This is undoubtedly a thoroughly entertaining and witty film.

Brilliantly executed, and with a healthy dose of dark humor, this is the kind of film that Scorsese does best. He is back to the mean streets with this film, which is his specialty. The Departed is his most purely enjoyable movie in years, and a thoroughly engrossing and entertaining gangster drama.

A word of advise for some – this is vintage Scorsese, which means that not only is it laced with profanity, it has the most inventive usage of it in years. If you intend to watch it with someone easily put off by that, or by, you know, heads blowing apart and bodies smashing on the ground, be forewarned.

Aside from the hardcore language and violence, however, The Departed is one of the best crime dramas in recent times. It is a smart, entertaining and well-crafted film that you should look out for at the Oscars this year.
Share. Save. Connect.
Tweet
THE DEPARTED SNAPSHOT

See The Departed full details
THE DEPARTED USER REVIEWS
1 - 4 OF 4 COMMENTS
POSITIVE  |  NEGATIVE |  NEWEST  |  OLDEST  |  MOST HELPFUL  |  LEAST HELPFUL
USER RATING
9.1
40 USERS
Performances
Script
Music/Soundtrack
Visuals
NA
NA
NA
NA
Can watch again - NA
Good for kids - NA
Good for dates - NA
Wait to rent it - NA
Aishwarya Mantha on 6th Nov 2006, 9:29am | Permalink
I love the star cast, I love the director, I love the story and then the entire package is- PERFECT. It was out-and-out entertainer and I recommend anyone over 18 to watch it!!!
RATING
10
Rahul on 5th Nov 2006, 8:51pm | Permalink
Awesome flick. Can't wait for it to be remade in Hindi with Hrithik, AB Jr. and Nana Patekar. Common - you know they will have to! Give it to RGV to helm it... he keeps it real.. hello - is there any producer listenin??
RATING
10
Achcha Ji...? on 4th Nov 2006, 11:48pm | Permalink
great movie! but samrat, do u have to borrow from other reviews to write your own? you wrote: "...He (Wahlberg) gets the best lines in the film, and delivers them with such crackle and pop, that you want him to return every scene...". the Rediff reviewer had earlier written: "...Armed with the finest lines, Wahlberg packs a spectacular punch, and you constantly find yourself waiting for his return..."
RATING
10
Occasional Critic on 4th Nov 2006, 5:09pm | Permalink
The original was obviously better. Just pray that it not remade in hindi and telugu
RATING
8
LEAVE A COMMENT
fullhyd.com has 700,000+ monthly visits. Tell Hyderabad what you feel about The Departed!
MORE MOVIES
Latest Reviews
SR Kalyana Mandapam
Ippudu Kaaka Inkeppudu
Thimmarusu
Kadhanika
Shukra
more
Deyyam - 2021
Tempt Raja
Vakeel Saab
Wild Dog
Sulthan (Telugu)
Sulthan
Rang De (Telugu)
Saina
Aranya
Chaavu Kaburu Challaga
Contemporary Reviews
Water
Double Cross
Bheja Fry
Takkari Donga
Tere Naam
more
The Marine
Balu
Samanyudu
Maharadhi
Pogaru
Bhadra
The 13th Warrior
Just Married (Hindi)
Vivah
Random Reviews
Jo Jeeta Wohi Sikandar
Enemy At The Gates
Dhanalakshmi... I Love You!
Asambhav
Nazar
more
Yuvatha
Road To Sangam
Sucker Punch (Telugu)
Eka Veera
Jaffa
Highway
Paddington
Money Monster
Thor: Ragnarok
Abhinetri 2
SEARCH MOVIES
Dissatisfied with the results? Report a problem or error, or add a listing.
ADVERTISEMENT
SHOUTBOX!
{{todo.name}}
{{todo.date}}
[
ip{{todo.ip}}
]
{{ todo.summary }}... expand »
{{ todo.text }} « collapse
First  |  Prev  |   1   2  3  {{current_page-1}}  {{current_page}}  {{current_page+1}}  {{last_page-2}}  {{last_page-1}}  {{last_page}}   |  Next  |  Last
{{todos[0].name}}

ADVERTISEMENT
This page was tagged for
The Departed english movie
The Departed reviews
release date
Leonardo DiCaprio, Matt Damon
theatres list
Follow @fullhyderabad
Follow fullhyd.com on
About Hyderabad
The Hyderabad Community
Improve fullhyd.com
More
Our Other Local Guides
Our other sites
© Copyright 1999-2009 LRR Technologies (Hyderabad), Pvt Ltd. All rights reserved. fullhyd, fullhyderabad, Welcome To The Neighbourhood are trademarks of LRR Technologies (Hyderabad) Pvt Ltd. The textual, graphic, audio and audiovisual material in this site is protected by copyright law. You may not copy, distribute, or use this material except as necessary for your personal, non-commercial use. Any trademarks are the properties of their respective owners. More on Hyderabad, India. Jobs in Hyderabad.