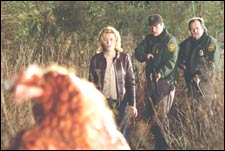 For James Gunn's Slither has all that in spades, and like 2004's Shaun of the Dead, it is self-aware without being self-mocking. This is a film that takes its horror sensibilities seriously, and puts some really goofy characters in some really nasty situations involving space slugs and zombies. Yes, you heard us right – space slugs. Be afraid, little man.

Slither is set in a slowly decaying town of Wheesley, where Grant Grant (Michael Rooker) and his trophy wife Starla (Elizabeth Banks) live in a marriage full of riches but rife with tensions. Bill Pardy (Nathan Fillion) is the easy-going, rather lazy police chief, and Jack MacReady (Gregg Henry) is the potty-mouthed and overreacting Mayor. Going quickly through the main players, and the supporting cast, Gunn establishes a living, real town, that he is soon going to take to hell.

To his credit, Gunn decides not to eschew fast-paced narrative for needless character time, but without going short on character development. An alien invasion pervades the sleepy little town pretty much in the first act, infecting unsuspecting Grant Grant. This gives the director room to play around with some nice CG and make-up effects to bring up some delectably (excuse the unsavory description) devilish gross-out moments and general monster mayhem.

There are tentacles, oozing faces, slime and slugs all around hereon. The CG slugs are largely well done, but the real treat is the make-up. There is some terrific work in creating close-ups of slimy faces and alien-infested zombies to every true horror fan's glee.

Grant is now mind-controlled by the space slug with a huge meat hunger, and is bent on infecting the whole town. The aim is to overrun Earth with hungry, slimy and half-crazed meat-eating zombies created from space alien slugs. (No matter how long the review, I'm not going to get tired of saying space slugs). It is up to the inept policeman, the over-the-top Mayor, and Grant's wife to save the earth now, and this is where Gunn brings in more fun.

Slither as a movie has more than just the alien invasion / zombie infestation going for it. The characters are rich in fiber, and have some hilarious and witty lines to speak. The dialog is never irreverent, yet the humor it carries is in spades. It is largely due to the excellent cast that Gunn has assembled for the film.

Michael Rooker is great as Grant, which is pivotal for the film, and a very difficult job for him as well. He needs to create a subliminal villain who is largely evil, but has a hint of humanity about him, and this is what Rooker nails. Nathan Fillion has always been great, Serenity and Firefly being excellent cases in point. This film proves that there are a very few actors gifted with such perfect timing and deadpan humor, along with the presence to play a twisted, yet lovable lead man.

To their credit, the supporting cast do not remain behind the leads in acting cojones, and that helps plod the relatively slow second act forward. The complain regarding pacing is only minor, and comes towards the end of the second act, and it does not take away from what is otherwise a well-made, and balls-out gory film.

Slither is a fun film crafted lovingly by the director and his cast and crew, with their respect for the old horror classics of the eighties showing in almost every other scene. The humor never gets overbearing, the gore and gross factor never gets shortchanged, and it even has some truly great moments of sheer human character.

ADVERTISEMENT
This page was tagged for
Slither english movie
Slither reviews
release date
Nathan Fillion, Elizabeth Banks
theatres list
Follow @fullhyderabad
Follow fullhyd.com on
About Hyderabad
The Hyderabad Community
Improve fullhyd.com
More
Our Other Local Guides
Our other sites
© Copyright 1999-2009 LRR Technologies (Hyderabad), Pvt Ltd. All rights reserved. fullhyd, fullhyderabad, Welcome To The Neighbourhood are trademarks of LRR Technologies (Hyderabad) Pvt Ltd. The textual, graphic, audio and audiovisual material in this site is protected by copyright law. You may not copy, distribute, or use this material except as necessary for your personal, non-commercial use. Any trademarks are the properties of their respective owners. More on Hyderabad, India. Jobs in Hyderabad.