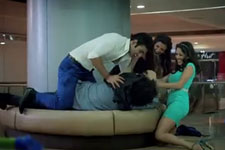 Swayamsrestha Kar / fullhyd.com
EDITOR RATING
5.0
Performances
Script
Music/Soundtrack
Visuals
6.0
4.0
5.0
5.0
Suggestions
Can watch again
No
Good for kids
No
Good for dates
No
Wait to rent it
Yes
To be fair, horror is a difficult genre to handle, especially in India. And the reason behind this is that we are a stubborn lot. We like to show that our courage is made out of premium tungsten and that we would look at an approaching chudail with mild curiosity and ask her if she's having trouble walking, what with her directionally-challenged feet. While on the inside, we might really just be reciting the Hanuman Chalisa at a rate of a trillion words per minute.

We also like to flaunt our knowledge of cinematic predictability. "Ah, the door's going to creak ominously now," we say, when the breathless quavering (and often amply buxom) female is nearing the end of a darkened corridor. "That slimy rich dude is the reason the bhatakti aatma is atrupt because he got her pregnant and then killed her while proposing marriage to her", we opine, usually around the intermission, when we have stepped outside to re-fill the popcorn tub.

Again, in the interest of being fair, all these uncanny premonitions are justified because we have seen the same charade being played out so many times before. There will always be a reckless idiot in a group of friends that has just been stranded in an eerie place, who will go around saying "Look, I am opening the door of the closet that everyone, including the hysterical moth-eaten chaukidar at the gate, warned us not to open!", right before saying "Oh *&^@!", thus making an immature choice even out of last words.

And there will always be that impressionable maiden who acts as a kind of antenna for supernatural presence, because she will always be seeing things that others will arrive too late to see, and will always be the person who survives - probably because she is an innocent virgin and the abovementioned aatma sees her as a kindred spirit (wow, we weren't even aiming for that last one!).

Anyways, to cut a long tirade short, we are a hardened lot. Or at least, we pretend that we are. And though makers of horror movies have tried to introduce newer terror-arousing concepts amongst people whose idea of the standard ghost is a white-saree-clad female with long hair, they have mostly failed - either because those concepts were, to put it politely, blatant rip-offs of Hollywood movies, or because they were executed with the same cinematic vision as that of the Ramsay brothers.

So, when we heard that Darr @ the mall was directed by the man who had been at the helm of the unconventionally scary Ragini MMS, we naturally had high hopes. And we are happy to report that by the time the interval rolled in, and the latest child ghost had disappeared off the screen, we were almost scared. Almost.

The Amity Mall is rumoured to be haunted and this worries the business honchos who had invested in the construction of that damn thing. So, they hire ex-army man, Vishnu, (Jimmy Shergill) as the security officer, because he comes recommended by the previous security officer who had been unceremoniously bumped off (allegedly by the same ghost/s) in the process of making that recommendation on phone. Level-headed Vishnu is then charged with looking after the security arrangements for a grand party that has been planned to be held at the mall.

It is here that a group of drunk youngsters take it into their heads to behave in the ways in which drunk youngsters are wont to behave, and they too, start getting unceremoniously bumped off. One of these youngsters is Ahana (Nusrat Barucha), daughter of one of the businessmen who own the mall. For more information on her character, refer back to that line on the helpless virginal maiden (and the "kindred spirit" quibble).

As the murders roll in (literally, as one of them takes place in a skating rink), Vishnu is made to realise that he can apparently make the supernatural presence(s) go away, because of an incident that had happened in his childhood.

The plot genuinely tries to be unconventional by placing the horror story within an urban space - a mall - instead of in a conveniently isolated forest or mansion. The identity of the ghost is also unique as far as Hindi cinema is concerned.

But then, what is unique for Hindi cinema need not necessarily be original. And that is where Darr fails majorly. All the usual clichés are in place, and bits and pieces (and indeed, entire chunks) of The Conjuring, Amityville Horror, Sinister and even The Prestige keep popping up every now and then. After a while, it gets really tiring.

The script itself is filled with glaring loopholes, especially the part of it concerned with Vishnu's background story. Our makers really need to know how amnesia works. The screenplay gets repetitive, true, but it rustles up a decent spook here and there. But that in itself is not nearly enough to keep people from fidgeting.

The film shows potential for a more refined rendition of the horror element, but somewhere along the line, the execution gets in the way. The music, save Pinacolada, is hardly memorable.

What anchors the film, then, is a subtly strong performance by Jimmy Shergill. Seriously, if this reviewer were ever caught up in a whirlwind of scary elevators and spooky corridors, she'd hope that the security guard on duty is Jimmy Shergill. He does swing the customary torchlight quite stylishly...

Anyways, Darr @ the mall shows promise in fits and bursts, but doesn't become spine-chillingly scary because, yeah, we really have seen it all before.
Share. Save. Connect.
Tweet
DARR @ THE MALL SNAPSHOT 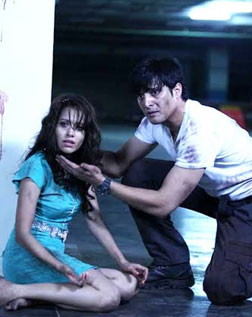 ADVERTISEMENT
This page was tagged for
darr hindi movie
Darr @ The Mall hindi movie
Darr @ The Mall reviews
release date
Jimmy Shergill, Nushrat Bharucha
Follow @fullhyderabad
Follow fullhyd.com on
About Hyderabad
The Hyderabad Community
Improve fullhyd.com
More
Our Other Local Guides
Our other sites
© Copyright 1999-2009 LRR Technologies (Hyderabad), Pvt Ltd. All rights reserved. fullhyd, fullhyderabad, Welcome To The Neighbourhood are trademarks of LRR Technologies (Hyderabad) Pvt Ltd. The textual, graphic, audio and audiovisual material in this site is protected by copyright law. You may not copy, distribute, or use this material except as necessary for your personal, non-commercial use. Any trademarks are the properties of their respective owners. More on Hyderabad, India. Jobs in Hyderabad.