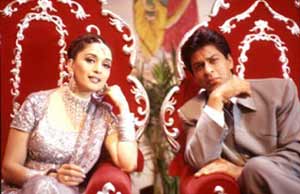 Arpan Panicker / fullhyd.com
EDITOR RATING
7.0
Performances
Script
Music/Soundtrack
Visuals
NA
NA
NA
NA
Suggestions
Can watch again
NA
Good for kids
NA
Good for dates
NA
Wait to rent it
NA
It has been almost five years now since they started making Hum Tumhare Hai Sanam. You can even make out the chronological order in which the scenes were shot over the years, thanks to Madhuri's expanding waistline and Salman's receding hairline. And the story is older than even the reels of this movie. But the treatment is fresh, and that makes all the difference.

Gopal (Shahrukh Khan) and Nita (Suman Ranganathan) have been brought up by their swargawasi Dad's friend who is called either Baba or Nanaji, and has no other name (Alok Nath). Nanaji's grandkids are Radha (Madhuri Dixit) and Prashant (Atul Agnihotri), who were taken away by their mom (Aruna Irani) after Nanaji refused to save their drunken dad. Mom also adopts a nameless orphan and baptizes him Suraj (Salman Khan).

Mom dies and Radha and Prashanth come to stay with Nanaji and gang. Suraj meanwhile becomes a beeeg singer. With minimal fuss Gopal and Radha get married and Suraj sings a mushy, teary-eyed number at their wedding, free of charge.

Gopal tries his best to get romantic with his new wife, but there is too much interference. He sends off Nanaji to a teerath yatra. But the main interference is Suraj, whose bouts of diarrhea disturb romantic bliss. That is about as much as any man can take!

This gets worse as Gopal starts developing a complex, and as is usual in Hindi movies, hears a few wrong things at the wrong time. Intimidated by Suraj's body and his singing prowess, our man is lost. Things come to a head, and he asks Radha to leave him for a few days and then follows it up by sending her divorce papers. Things however are sorted out in a climax which features Salman's real-life sweetheart in a special appearance.

The subject is as old as Dracula's dentures, and has been explored time and again. Jealousy, thy name est Shahrukh once again with Madhuri. And Shahrukh manages a decent portrayal resisting the urge to ham with admirable restraint. Melodrama and clichés have been avoided as far as possible, and though the director succumbs to temptation towards the end, he doesn't do much harm.

The movie has tried to take a realistic view of life and the danger that lies in a single seed of suspicion and doubt, and has done well. Some of the scenes have so much potential for the regular ghisa-pita dialogues that you almost flinch in advance, but the simple and refreshing manner in which they have been shot comes as a surprise.

All three main actors deliver what is asked of them. Madhuri plays a simple, straightforward Bharatiya Nari kind of a role. Shahrukh, we have already talked about, and Sallu bhai, clad decently enough, plays the nutty type once again.

Good direction, tolerable music and a good overall package. It keeps the feminists, the chauvinists and the bees-ka-chaalis-ists happy. What more can one ask for?
Share. Save. Connect.
Tweet
HUM TUMHARE HAIN SANAM SNAPSHOT

ADVERTISEMENT
This page was tagged for
Ham thumare Hai sanam full movie
ham tumhare hai sanam full movie online
Bhartiya old romantic muvi.
Hindi film ham tumhare hai sanam
ham tumhare hai full movie
Follow @fullhyderabad
Follow fullhyd.com on
About Hyderabad
The Hyderabad Community
Improve fullhyd.com
More
Our Other Local Guides
Our other sites
© Copyright 1999-2009 LRR Technologies (Hyderabad), Pvt Ltd. All rights reserved. fullhyd, fullhyderabad, Welcome To The Neighbourhood are trademarks of LRR Technologies (Hyderabad) Pvt Ltd. The textual, graphic, audio and audiovisual material in this site is protected by copyright law. You may not copy, distribute, or use this material except as necessary for your personal, non-commercial use. Any trademarks are the properties of their respective owners. More on Hyderabad, India. Jobs in Hyderabad.