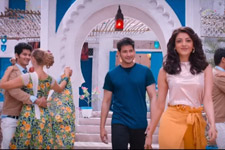 Ravi Kandala / fullhyd.com
EDITOR RATING
4.5
Performances
Script
Music/Soundtrack
Visuals
7.0
3.0
5.0
7.0
Suggestions
Can watch again
No
Good for kids
No
Good for dates
No
Wait to rent it
No
Director Sreekanth Addala loves tradition. So much that he will set a duet in a Greek market set and ensure that all the junior artistes in the song are dressed like Greek troubadours. And then he'll shift to an Arab market set and have the heroine and the junior artistes do a belly dance.

Unfortunately, he does not show the same respect for the traditions of filmmaking or storytelling. Right from Seetamma Vaakitlo Sirimalle Chettu, he's always cocked a snook at traditional stories with a beginning, an interval bang and a climax pattern. SVSC was about two brothers, and even towards the end of the movie, there was no real closure - it was not like the two brothers had settled down or made it in life, and their struggles would continue. He followed that up with Mukunda where the hero and heroine do not meet until the interval and do not speak to each other throughout the movie but come together in the end.

In Brahmotsavam, the randomness of storytelling reaches its peak. The film is essentially about an extremely opulent family comprising a boy (Mahesh Babu), his father (Satyaraj), mother (Revathi) and a bunch of other relatives. Satyaraj is a strong believer in extended family ties and wants all his relatives around him as much as possible, and consequently several actors including Naresh, Jayasudha, Nadhiya, Tanikella Bharani, Krishna Bhagwan, Sayaji Shinde and others stand around in the frames without doing much through the movie.

There is obviously one jealous uncle (Rao Ramesh) who does not like the fact that Satyaraj is on a pedestal all the time, and says some harsh things that lead to a rift. This causes a twist that leads Mahesh to embark on a tour across the country searching for relatives connected to him from ties spanning the last seven generations. He returns after finding some of them. And Rao Ramesh realizes the error of his ways. And the movie ends. There are also two love stories weaved in - one with Kajal in the first half and one with Samantha in the second.

Brahmotsavam is a promising concept throttled by poor execution. The first half of the film plays out like a string of random sequences linked by an endless list of songs. The songs have some choreography which had the audience in splits, and come in way too frequently. The second half has one song playing in the background in bits and parts, and somewhere along the line, you start dreading the beats of that number. The moment you hear that background score, you realise you will watch Mahesh and Samantha in a new city or in their Audi convertible, and then there will be a usually unintelligible conversation.

Some of the scenes, like the Srinivasa Kalyanam, are very well-intentioned but make little sense in the larger scheme of things. We were also wondering at various points in the movie if Sooraj Barjatya ghost-directed this one in place of Sreekanth Addala - the cloying and saccharine sweetness of everyone in the movie is definitely Barjatya-esque.

Mahesh, Satyaraj and Rao Ramesh act very well. Samantha and Kajal are okay. And we mention only these names because none of the others has an opportunity to emote. Naresh seems to gets one line, Revati two, Jayasudha three, and most of the others not even one. Even someone as senior as Rohini Hattangadi gets two scenes and one dialogue.

The film is technically quite rich - Rathnavelu captures India with a loving lens, and PVP has spent tons of money that is clearly visible on the screen. The songs are decent, but that is it. Mickey J Meyer uses a Do Re Mi So score for some of the emotional moments which we felt was slightly out of place, but overall, does a decent job.

Brahmotsavam is hardly a celebration for even hardcore Mahesh fans. There is a dialogue that loads of characters in the movie keep repeating - "Okka manchi maata cheppandi". People walking out were finding it hard to find even "okka manchi maata" to say about the film.
Share. Save. Connect.
Tweet
BRAHMOTSAVAM SNAPSHOT 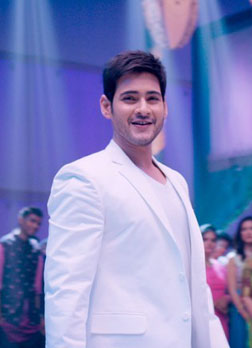 See Brahmotsavam full details
TOP COMMENT
Supriya on 21st May 2016, 1:03am | Permalink
I loved the whole concept of searching for relatives from seven generations. Mr. Addala should have directed this movie properly. As usual, Mahesh doesn't disappoint.
5
1
BRAHMOTSAVAM USER REVIEWS
1 - 10 OF 10 COMMENTS
POSITIVE  |  NEGATIVE |  NEWEST  |  OLDEST  |  MOST HELPFUL  |  LEAST HELPFUL
USER RATING
2.0
1 USER
Performances
Script
Music/Soundtrack
Visuals
NA
NA
NA
NA
Can watch again - NA
Good for kids - NA
Good for dates - NA
Wait to rent it - NA
Sameer on 23rd May 2016, 4:09pm | Permalink
Watched the move on first day in Chennai, for some reason theater wasn't crowded at all! The most positive statement that I can say is "Movie is not so lengthy" so you dont have to bang your head. Let me list out the points
Positive - I tried my best and found NOTHING!
Negative -
1. No proper story line and poor narration.
2. Unnecessary back to back songs similar to that of 90s Hindi Movies.
3. Very bad and pathetic editing and screenplay.
4. Irrelevant scene to scene shot.
5. Except Mahesh, no others have proper screen appearance.
6. 1st half Kajol's break up and 2nd half Samantha's entry - baseless!
7. Here and there unexplained screen-sharing and dialogues by other characters.

You just don't understand why you still watch this movie hoping for that "Mahesh's best is yet to come" . My rating is 0.5 for bold role of Kajol and 0.5 for rest of the movie!!!
madhu on 23rd May 2016, 12:04pm | Permalink
After watching this move, First time i felt that there should have been -ve rating for the movie, Please do consider that option.
Pnr on 23rd May 2016, 8:12am | Permalink
If a stranger claiming to be a guy's sister's friend, gets 50 strangers to the guys home to "fresh up" and go, a sane guy eould f$ck her up....but our Mahesh loves her.... Such a wacko guy mahesh is..the ehole family is wacko...only sane people in the film were Rao ramesh and kajal
Srikanth ni addanga narakandi on 22nd May 2016, 9:41pm | Permalink
No mention about the cryptic conversations between satyaraj and mahesh and samanta and kajal with mahesh??? And where the fudge was the sister when her papa dies????and the most burning question to me is... What hallucinogenic psychotropic dopey sh
Jordan on 21st May 2016, 4:12pm | Permalink
Chachchanu. I bought tickets for
Srikanthtptmunna@gmail.com on 24th May 2016, 8:27pm | Permalink
Facking immigrants
Sameer on 23rd May 2016, 4:13pm | Permalink
Bad luck, buddy! I can empathize your situation :-)
maktub on 21st May 2016, 2:17pm | Permalink
Once again thanks Ravi. It is amazing to read the review and getting a real feel of how the cinematic torture if going to be. Though I lost 500 bucks by not showing up for today morning show, I did asked my colleague to watch it instead. Guess what, he texts me, " slow movie sir, average stuff". Now I am at double loss. Mine and my colleague. God!!!!. Need to subscribe to Netflix for trial membership and download all House of Cards episodes and then cancel the membership immediately. I think that ONLY can give me the cruel satisfaction equivalent to compensate my loss. Btw, who invented this full Hyd movie review program?
Neil Anderson on 21st May 2016, 8:07am | Permalink
Going to watch it at noon today.

I did not want to read any review before watching this one but friends and family's 'word of mouth' spoilt my plan. Ravi K's review was like the last nail in the coffin and to top it I saw the viral video of Mahesh's funny dance step. .. So much for all the excitement of booking tickets early for this one!
Supriya on 21st May 2016, 1:03am | Permalink
I loved the whole concept of searching for relatives from seven generations. Mr. Addala should have directed this movie properly. As usual, Mahesh doesn't disappoint.
RAJ on 21st May 2016, 12:30am | Permalink
Scrap movie... Scrap script and direction.
RATING
2
Josh on 20th May 2016, 10:17pm | Permalink
I've been hearing conflicting views since the morning. Your review catches the essence, Ravi.
Kush on 21st May 2016, 2:14am | Permalink
The reviewer is really modest and generous in giving 4.5. I would have given 0.5. Srikanth Addala lost his head and it is really surprising that mahesh gave a nod to a film where there is zero script and completely contradicting characters like that of satya raj when he feels all should be together why is that he is always on stage pushing his BILs away. Trash complete trash please do not watch it.
LEAVE A COMMENT
fullhyd.com has 700,000+ monthly visits. Tell Hyderabad what you feel about Brahmotsavam!
MORE MOVIES
Latest Reviews
Bangaru Bullodu
Madam Chief Minister
Red (Telugu)
Master (Tamil)
Master - 2021
more
Krack
12 O Clock
Solo Brathuke So Better
Bloodshot
Angrezi Medium
Baaghi 3
Palasa 1978
Sonic The Hedgehog
Kanulu Kanulanu Dhochaayante
Thappad
Contemporary Reviews
Sarbjit
X-Men: Apocalypse
A Aa
Gentleman (2016)
Udta Punjab
more
Raman Raghav 2.0
Rojulu Marayi
Money Monster
Azhar
Pencil
Captain America: Civil War (...
Captain America: Civil War
24
Traffic (2016)
Random Reviews
Jo Jeeta Wohi Sikandar
Enemy At The Gates
Dhanalakshmi... I Love You!
Asambhav
Nazar
more
The Killer
Game
Max Payne
Inkosari
Zokkomon
Zindagi Tere Naam
The Croods (3D)
300: Rise Of An Empire (3D)
Thor: Ragnarok
Abhinetri 2
SEARCH MOVIES
Dissatisfied with the results? Report a problem or error, or add a listing.
ADVERTISEMENT
SHOUTBOX!
{{todo.name}}
{{todo.date}}
[
ip{{todo.ip}}
]
{{ todo.summary }}... expand »
{{ todo.text }} « collapse
First  |  Prev  |   1   2  3  {{current_page-1}}  {{current_page}}  {{current_page+1}}  {{last_page-2}}  {{last_page-1}}  {{last_page}}   |  Next  |  Last
{{todos[0].name}}

ADVERTISEMENT
This page was tagged for
Brahmotsavam telugu movie
Brahmotsavam reviews
release date
Mahesh Babu, Samantha
theatres list
Follow @fullhyderabad
Follow fullhyd.com on
About Hyderabad
The Hyderabad Community
Improve fullhyd.com
More
Our Other Local Guides
Our other sites
© Copyright 1999-2009 LRR Technologies (Hyderabad), Pvt Ltd. All rights reserved. fullhyd, fullhyderabad, Welcome To The Neighbourhood are trademarks of LRR Technologies (Hyderabad) Pvt Ltd. The textual, graphic, audio and audiovisual material in this site is protected by copyright law. You may not copy, distribute, or use this material except as necessary for your personal, non-commercial use. Any trademarks are the properties of their respective owners. More on Hyderabad, India. Jobs in Hyderabad.