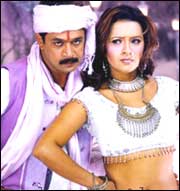 Deepa Menon / fullhyd.com
EDITOR RATING
5.0
Performances
Script
Music/Soundtrack
Visuals
NA
NA
NA
NA
Suggestions
Can watch again
NA
Good for kids
NA
Good for dates
NA
Wait to rent it
NA
Remember those angry-young-man movies where as the opening credits roll we see little Vijay’s feet turning into the feet of Amithabh Bachchan as they run away from the scene of crime? These were tales revolving largely around the same three suspects: love, honor, family. Well, that’s the kind of good ol’fashioned ingredients that go into the making of Giri, a movie with plenty of gore, bore and lore. Not to mention, tub-thumping music and girls who dress at the cutting edge of nudity.

When Giri was only a little boy, he and his much richer pal, Raj, witness the murder of Raj’s father. Or what we think is the murder of Raj’s father. Apparently having a knife shoved through his torso, out the other side, and joggled up and down, has very little effect on this man’s social life. The father escapes with no major mishaps, but loses contact with his only son, who he forces to run away from the baddies. He (the father) sends Giri to protect his son. Giri later turns in Arjun, Raj turns into Prakash Raj, and the father turns into a man in a bad wig.

Cut to the present, and Giri is located in a small town with Tamil signboards (possibly because this film was dubbed) and a family of three, Raj’s wife, son and sister. The family doesn’t know who Giri is and being generally poor at current affairs, they don’t even know that Raj is dead. Neither do you till the interval. But then, you’re the sort of person who would actually buy tickets to a show like this so you’ll excuse us if we don’t think you’re much to go by.

Like all small-town families everywhere, Raj’s family has trouble with the local meanies. Not too much, you know, just enough to keep Arjun’s newly acquired flab-free frame in shape. Then, in the tradition of young unmarried sisters throughout the history of filmdom, Raj’s sister becomes pregnant by the son of the villain, the man responsible for the massacre that separated father from son.

That pretty much does it for plot summary. Giri tries to keep the family alive and divides his screen time liberally between lead girl pre- (Reema Sen) and lead girl post-interval (Ramya). The first one does a few extremely high-voltage jigs with him at the start of the film, and the second one adds some jhatak-matak to the flashback. That’s their sole purpose in the film, while Arjun’s sole purpose is to keep the hits coming. And he does. The baddies line up for the pleasure of having their faces rearranged by him.

The movie has its priorities very neatly marked and time is spent accordingly on action, comedy, nasty jigs, and what the directors down South describe best as ‘family emotion’. Copious amounts of tears are shed, but things are never allowed to stagnate for too long. As a film that takes you only so far and no further, Giri is altogether quite bearable. But then, judging by our constantly falling standards, that’s not much to go by either.

ADVERTISEMENT
This page was tagged for
Giri telugu movie
Giri reviews
release date
Arjun, Reema Sen
theatres list
Follow @fullhyderabad
Follow fullhyd.com on
About Hyderabad
The Hyderabad Community
Improve fullhyd.com
More
Our Other Local Guides
Our other sites
© Copyright 1999-2009 LRR Technologies (Hyderabad), Pvt Ltd. All rights reserved. fullhyd, fullhyderabad, Welcome To The Neighbourhood are trademarks of LRR Technologies (Hyderabad) Pvt Ltd. The textual, graphic, audio and audiovisual material in this site is protected by copyright law. You may not copy, distribute, or use this material except as necessary for your personal, non-commercial use. Any trademarks are the properties of their respective owners. More on Hyderabad, India. Jobs in Hyderabad.