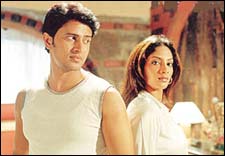 Mithun Verma / fullhyd.com
EDITOR RATING
6.0
Performances
Script
Music/Soundtrack
Visuals
NA
NA
NA
NA
Suggestions
Can watch again
NA
Good for kids
NA
Good for dates
NA
Wait to rent it
NA
Ever wonder how many forms you have to fill out in your daily life for varied reasons like joining kindergarten and eating pizza? More importantly, ever wonder why most of the people asking you these questions are also the ones asking you for your money and your time? Now, don't you think it should be reversed? So here's a questionnaire YOU can give to the filmmakers before paying to see a movie:

(The form below has been filled by the crew of Appudappudu, for easy understanding.)

'Read carefully. Best results if done so before answering. This questionnaire is being given to you by an ordinary bum who has entrusted with you his hourly pay and his hourly time! So, find a crew member who can read and write, and instruct him to answer the following truthfully:

2. Name of the original, smart ass! 'Cos I'm paying to see that too!
Oh! Hehe... what's the meaning of original?

3. Do you also claim your movie to be 'different' like the other windbag directors?
Certainly not! My movie is one of a kind, not run-of-the-mill, unique... But 'different'? No way!

4. Is it true that the music is really good?
Mani Sharma gives great music, but since this movie is 'unique' we don't have him. We have R P Patnaik, who tried really hard to make this his worst movie thus far. Isn't that really exciting?

5. What's the story of the flick? (If it has any) or (If you can make one up since you think I won't remember anything once I get into the hall)
Fate brings 2 strangers together... that's me and the producer. And that's when we formulated the story: Our hero and the heroine are bound together by the vows of arranged marriage. The first half shows how they discover love for each other and how they discover each other's anatomy. But soon they realise the obscurity of marriage and file for divorce. So, the first half is about the couple falling in love and falling right out of it. This they tell me is Newton's law (something about action and reaction). So there - a scientific story!

6. From where has this story been stolen?
My lawyer tells me I'll end up in trouble if I answer this.

8. Don't you have any conscience?
I don't. As long as you schmucks keep watching the same ol' stories again and again and actually make them blockbusters. And moreover I stole from two outstanding movies. Gimme credit where it's due!

9. Will I get half of my money back if I run home from the interval?
No. But you can have half of your ticket and parking bill back. Absolutely free!

10. What about the rest of the story?
The second half finds the couple in a village setup where they have to stay together to attend a wedding. There they come across many happily married couples, still lovey-dovey and all. This makes them rediscover their own romance. This half has numerous scenes that were termed as worth watching, cute, cosy, pleasant, adorable and original. Sometimes even by people other than me. I'm sure all of this will get it a decent rating.

11. Is there any comic relief?
There's plenty of comic relief. If you can bring your night vision goggles and some Calvin and Hobbes books, that is. Or you can laugh at the dunce sub-plot of the courtship between the hero's pal and the heroine's friend even though it was intended to be of Mills and Boon calibre.

12. How's the hero's performance?
It is often said that 'Curses, like chicken, will come home to roost' and that 'the man is not poor who has use of things necessary'. To this I might add 'the weeping bride is a laughing wife.' My point is clear.

13. Do I dare ask about the heroine?
I first saw her on SS music when I was reading 'Real Women Have Curves'. Her spaghetti top, her mini skirt and those pearls... damn, those pearls! I knew instantly that I HAD to have her. In this role, I mean. You might actually see her face a little moist in a few scenes. That's because she was just out of the Jacuzzi. I wanted my heroine to be fresh, so I ordered her frequently to go and take showers in my custommade "all see" bathroom!

14. Where can I find you if I find the movie extremely agonizing and want to do similar things to you?
No comments.

15. And lastly, describe in a few words why this should be a good movie:
Because I made it. Also, there aren't any movies better than this running anywhere. This has all the ingredients: romance - which is why this got the rating it got; emotion - which can be clearly seen in the audiences' fists; comedy - that will make you laugh until you stop! So there.

ADVERTISEMENT
This page was tagged for
Appudappudu
hero raja, sriya reddy movie
appudappudu movie
appudappudu film
Appudappudu telugu movie
Follow @fullhyderabad
Follow fullhyd.com on
About Hyderabad
The Hyderabad Community
Improve fullhyd.com
More
Our Other Local Guides
Our other sites
© Copyright 1999-2009 LRR Technologies (Hyderabad), Pvt Ltd. All rights reserved. fullhyd, fullhyderabad, Welcome To The Neighbourhood are trademarks of LRR Technologies (Hyderabad) Pvt Ltd. The textual, graphic, audio and audiovisual material in this site is protected by copyright law. You may not copy, distribute, or use this material except as necessary for your personal, non-commercial use. Any trademarks are the properties of their respective owners. More on Hyderabad, India. Jobs in Hyderabad.