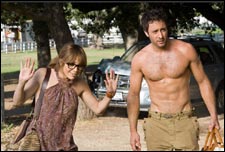 Samrat Sharma / fullhyd.com
EDITOR RATING
3.5
Performances
Script
Music/Soundtrack
Visuals
5.5
2.5
4.0
5.0
Suggestions
Can watch again
No
Good for kids
No
Good for dates
Yes
Wait to rent it
Yes
The Back-Up Plan is a no-good, terrible, trashy, unfunny, insipid and boring film. Believe me, I'm as serious as labour pains. The Back-up Plan doesn't deliver a bundle of joy so much as it gives you a headache and a nagging question - why would anyone greenlight anything with J Lo anymore?

Miracles, it appears, are not restricted to child-birth.

Jennifer Lopez plays Zoe, a New York (of course) businesswoman who is gorgeous and inexplicably single (of course). She desperately wants a baby, so she gets artificially inseminated (we can safely make fun of this - she has no medical issues, she's just bored). Cue her meeting Mr. Perfect. Stan (Alex O'Loughlin) is an organic farmer who makes fancy cheese and takes his shirt off a lot.

They fall in love, and what passes for hi-jinx in this movie, ensues. That writer Kate Angelo comes to this after having written sitcoms like Will And Grace is clear by the absurdly sitcom-like situations and forced laughs she tries to write into her sorry screenplay. There is a wackadoodle grandma, an amateur labour and subsequent birth, a dog that eats pregnancy tests... the list goes on (and so does the film).

Horrible googly-eyed acting as if waiting for the laugh-track to fill in the lack of humour and emotion starts from Jennifer Lopez but is spread like a disease to the entire cast of the film. It grates, it pains, and much, much before the film ends, it makes you want to strangle someone.

Probably the only saving grace is O'Loughlin who has enough charisma to move beyond this dud and create something worthwhile.

The script does no one any favours, obviously. The crux of the film is Zoe trying to tell cheese-boy about her pregnancy, and being interrupted by situations that lead to "comedy". Once he shows her his cheese (no innuendo intended), another time, she vomits on his shoes. Once she does, it's constant bickering and boring fights about trust and understanding.

There is of course, nothing good about this film, and whole lot of horrible thing - but I won't divulge all of them. It's a tired old cliché of a romantic comedy full of tired old cliches and is made in the most joyless way possible.
Share. Save. Connect.
Tweet
THE BACK-UP PLAN SNAPSHOT

ADVERTISEMENT
This page was tagged for
The Back-up Plan english movie
The Back-up Plan reviews
release date
Jennifer Lopez, Alex O'Loughlin
theatres list
Follow @fullhyderabad
Follow fullhyd.com on
About Hyderabad
The Hyderabad Community
Improve fullhyd.com
More
Our Other Local Guides
Our other sites
© Copyright 1999-2009 LRR Technologies (Hyderabad), Pvt Ltd. All rights reserved. fullhyd, fullhyderabad, Welcome To The Neighbourhood are trademarks of LRR Technologies (Hyderabad) Pvt Ltd. The textual, graphic, audio and audiovisual material in this site is protected by copyright law. You may not copy, distribute, or use this material except as necessary for your personal, non-commercial use. Any trademarks are the properties of their respective owners. More on Hyderabad, India. Jobs in Hyderabad.