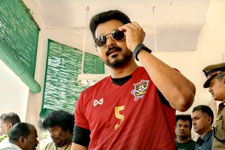 T J Reddy / fullhyd.com
EDITOR RATING
5.0
Performances
Script
Music/Soundtrack
Visuals
7.0
3.0
5.0
5.0
Suggestions
Can watch again
No
Good for kids
Yes
Good for dates
Yes
Wait for OTT
Yes
For the longest time, Tamil cinema has had star rivalries. Be it Simbu v Dhanush, Suriya v Vikram, Rajnikanth v Kamal Haasan, MGR v Sivaji or Ajith v Vijay, star rivalries have helped keep Kollywood churn out some massive hits and equally massive duds, year after year. Back in the MGR v Sivaji days, fans in either camp were avid watchers of the other star's films. They would diligently take note of what their rival star's films were doing and demand better from their stars in the spirit of healthy competition. With Whistle/Bigil, the actor-director combo of Vijay-Atlee seems to be sending a loud and precise response to Ajith's Viswasam and Nerkonda Paarvai. Whatever you can do, we can do bigger, if not better.

We have an older Vijay and a younger one, we have a sports-centred drama, we have a Nayantara with a purpose, and we have women empowerment as the social message. While the sport of choice with Viswasam was track and field, Whistle chooses football as its conduit. Michael s/o gangster Rayappan was once a footballer who captained the state football team and was on the cusp of getting into the Indian national football team. However, circumstances drag him into the mire of the "family business".

However, however, life offers him a second chance living his dream. Circumstances lead him to the role of being the coach of the state women's football team as they compete at the national championship. Will these ladies accept a well-known gangster as their coach, or will his hopes crash and burn as they did once before?

Well, if you've seen one mass movie you've seen 'em all, and hence you know how this bad boy ends. The question then is how well was this film put together as it makes its way to said predictable end.

As with every movie, there are things Whistle gets right followed swiftly by sequences that take hard left turns. The former that papers over a lot of the latter is Vijay himself. Many a fresh-faced actor wants to be a mass hero with a state-wide appeal. They dream of a reliable fan base that values the Friday release more than life itself. But what they forget is that a real mass superstar has the innate ability to connect directly with an audience. It is a skill that only a handful of people possess. When a Rajnikanth, Ajith or Vijay spouts a line, the intended effect is for both the characters on screen and the audience looking at it. Hence, Vijay playing the male saviour in what is meant to be a female-centric film is acceptable simply because the masses need a socially conscious message to be delivered by a voice they implicitly trust.

However, Atlee chooses the most unfocused of ways to convey Whistle's simple message. This slow, bloated and plodding exercise in filmmaking has multiple instances of Yogi Babu playing football for a state-level team. Yogi Babu plays football on a state-level team because of comedy? Common sense? Physics? Or is this movie commenting on its snail-like pace? If yes, that is clever. However, we would ask the movie to explain how the women's team seems bereft of ideas without Michael's input, whereas Michael as a player appears to be both playing and coaching his side during his playing days.

Speaking of Michael's coaching, he doesn't as much coach as he delivers "massy" speeches. If speeches were enough to win matches, we could have had politicians orating to the galleries instead of searching far and wide and identifying Gary Kirsten as the man to mould the Indian national cricket team into a World Cup-winning side.

Speaking of politics, do we need to hear Vijay being called a "CM" or have him adjacent to MGR? Have we not seen his appeal to every community under the sun with his films already? Farmers, soldiers, fishers, tech employees, doctors and now sportspeople and women. Yes, we get it already. He is a secular leader for all the people and the little people they'll end up producing.

When the cynicism seems to be hitting too close to home, the smiling face on the screen appears to help us forget the harsh and manipulative nature of reality intermittently. Vijay acting off an older version of himself is a joy to watch. We would pay good money to see the man play an ageing gangster based on his work in this film. There are notes of tenderness and a sense of menace to the character of Rayappan that Vijay conveys with such élan that the character's stammer seems to accentuate the emotion more than detract from it.

The top-notch talent around him, however, plays glorified cameo roles more than being supporting characters. Nayantara, the actor, adds personality to her role more than the writing does. She does so much heavy-lifting with one stellar monologue that it is a shame to see her considerable talents go to waste in all others. While she gets one memorable scene, the extraordinary Kathir receives none. He along with Jackie Shroff, Arjan Bajwa, Vivekh, Anandraj and Daniel Balaji play such forgotten characters that their function in the story too concludes along with the final whistle of the final match with nothing of note happening before it.

Speaking of the football, the only thing we would like to say is FIFA, the game, looks more realistic than the football depicted in this film. While this is a competently shot and designed movie off the pitch, the antics on the ball are laughably bad.

Notice how we are yet to talk about the individuals on the women's team itself. While this is puzzling, it is no accident. The film's bloated nature puts its primary plot on the back burner for an extended period. When it does get around to the women, they are no more than a set of walking stereotypes and social ills rather than full-fledged characters. Oppressive households, body shaming, acid attacks and slut-shaming are all evils women have to contend with daily. Still, these ills and rising above them aren't the only things that define womankind. There is more to them than just those aspects, and Whistle seems uninterested in exploring those avenues.

That doubles up to A R Rahman's interest in exploring Whistle's music to being anything more than standard star vehicle fare. The music is enjoyable as long as it is on screen, and will soon make its way out of people's minds once the next scene takes its place. We sincerely hope that the movie's clear message stays in people's minds and won't lose its relavence when the upcoming "mass" film makes its way onto the screen with much-maligned navel grabbing.
Share. Save. Connect.
Tweet
WHISTLE SNAPSHOT 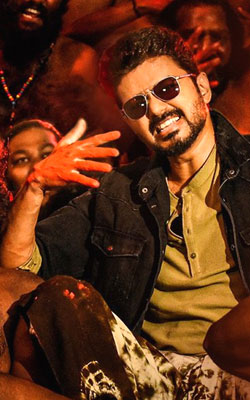 See Whistle full details
WHISTLE USER REVIEWS
1 - 1 OF 1 COMMENTS
POSITIVE  |  NEGATIVE |  NEWEST  |  OLDEST  |  MOST HELPFUL  |  LEAST HELPFUL
Josh on 26th Oct 2019, 7:25pm | Permalink
I could be mistaken but Yogi Babu did play some professional football before he got into films. And he's playing a football player in two other films apart from Bigil - Puppy, and Jada. Check out Jada's teaser. I'm quite kicked up.
TJ Reddy on 27th Oct 2019, 6:45am | Permalink
If he was a footballer, I am quite happy for him. But we are talking about his current day fitness, not to shame his body because I know I'm not perfect, but he wouldn't be coming close to a national side.

But that is just the least of this film's horrid footballing. The mannequin challenge shots, the constant overhead kicks, the literal lack of plays being created, so many more things that simple rainbow flicks can't cover up for.

ADVERTISEMENT
This page was tagged for
whistle telugu full movie online
whistle full movie in telugu
whistle full movie telugu download
Whistle Telugu Movie Download
whistle movie download
Follow @fullhyderabad
Follow fullhyd.com on
About Hyderabad
The Hyderabad Community
Improve fullhyd.com
More
Our Other Local Guides
Our other sites
© Copyright 1999-2009 LRR Technologies (Hyderabad), Pvt Ltd. All rights reserved. fullhyd, fullhyderabad, Welcome To The Neighbourhood are trademarks of LRR Technologies (Hyderabad) Pvt Ltd. The textual, graphic, audio and audiovisual material in this site is protected by copyright law. You may not copy, distribute, or use this material except as necessary for your personal, non-commercial use. Any trademarks are the properties of their respective owners. More on Hyderabad, India. Jobs in Hyderabad.