Nupur Barua / fullhyd.com
EDITOR RATING
3.0
Performances
Script
Music/Soundtrack
Visuals
4.0
3.0
5.0
6.0
Suggestions
Can watch again
No
Good for kids
No
Good for dates
No
Wait to rent it
No
A Bollywood movie need not be about stars for it to become popular, no matter what the trade gurus say. And to prove this rather ambiguous statement, this weekend saw the release of an independent film that is so well-made you wonder why you bother with the Khans and the Kapoors.

Chakradhaar is not that movie (the flick praised above is named Kshay - for those interested, it is a black-and-white venture that deals with obsession). In fact, Chakradhaar is so unreal that you will leave the theatre in shock and with reluctant awe for the producer who dared to spend all that money just because he wanted to see his son act out his super-hero fantasy.

Shravan (Abhishek Anand) is the "simple and righteous" son of a peon, who enrols himself in Benares University in some post-graduation programme. Needless to say, he is virtuous and a topper, causing Madira (Urvashi Sharma), the Principal's daughter, to fall head over heels in love with him. Life is good, and the good boy is about to find his happily-ever-after.

However, he cannot ignore the corruption and hooliganism that is rampant in the campus, and decides to raise his voice. This irks the smug MLA, Dharamraj (Akhilendra Mishra), and the inevitable happens - he destroys the young boy's life.

Shravan now wants to avenge his own destruction, and, strangely, changes his name to Pandit (all the better to scare his enemies). He has a patent dialogue with his identity - "Pandit dakshina bhi leta hain, aur shraap bhi deta hain", or words along those lines.

Pandit is dangerous for all those corrupt men, including his nemesis, Dharamraj. He becomes a menace for the villains, and the rest of the movie is one big action sequence after another, as he goes on a rampage to regain his lost pride.

There is no novelty in the plot, nor is it handled any differently. The underdog who becomes a hero is a premise that most Indians are familiar with, but the twists and turns are so predictable that you have to control the irresistible urge to blurt out to your neighbour what you know will happen next (chances are that your neighbour knows it, too). The introduction of a journalist (Vidya Malvade), and the entry of a mentor-turned-manipulator, only add to the painful realisation that the movie will meander enough to make it unbearable.

Abhishek Anand is not a great actor, but it is difficult to blame him alone for this debacle. He makes an attempt to first look innocent and then to look intimidating, and fails to create an impression in either avatar. He loves his wire-work, though, and is almost at peace when he is beating up people.

Urvashi Sharma, who has not done much in recent times, is so lost that you almost get up from your seat to guide her. Her acting is flimsy, and she definitely does not look like a college student. Vidya Malvade overdoes her sincerity act, but is a better performer than most of the others.

Akhilendra Mishra is scary, but he looks bored out of his mind. He has played different versions of the same character too many times to be excited about it, or to bring a fresh perspective to it. Ditto for Zakir Hussain. Yashpal Sharma is happy doing his North-Indian-aggressive-male act. Darshan Jariwala is a miscast misfit in the movie.

Chakradhaar is set in Benares, a city that has now become, thanks to Bollywood, synonymous with sleaze and unpleasant people. The cinematography does manage to capture some of its beauty, but you will miss those shots if you blink or reach for your popcorn. Action sequences are inspired by the latest Salman Khan movies (mostly Wanted) - actually, they are revised versions of every flying kick and slow motion punch that you have seen in recent times (think Ghajini, Dabangg, Golmaal, etc). There is not much in terms of production and costume designs, and the overall effect is bland and forced.

Short of scaring tourists off Benares, there is little that Chakradhaar does for the audience. There is absolutely no reason to watch the movie, unless you are a sucker for punishment. A fresh angle to the same story could have worked better, but unfortunately, the makers got it all wrong, and there goes another attempt at independent movie-making down the drain.
Share. Save. Connect.
Tweet
CHAKRADHAAR SNAPSHOT 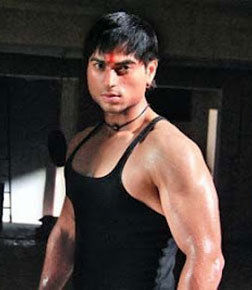 ADVERTISEMENT
This page was tagged for
Chakradhaar hindi movie
Chakradhaar reviews
release date
Abhishek Anand, Urvashi Sharma
theatres list
Follow @fullhyderabad
Follow fullhyd.com on
About Hyderabad
The Hyderabad Community
Improve fullhyd.com
More
Our Other Local Guides
Our other sites
© Copyright 1999-2009 LRR Technologies (Hyderabad), Pvt Ltd. All rights reserved. fullhyd, fullhyderabad, Welcome To The Neighbourhood are trademarks of LRR Technologies (Hyderabad) Pvt Ltd. The textual, graphic, audio and audiovisual material in this site is protected by copyright law. You may not copy, distribute, or use this material except as necessary for your personal, non-commercial use. Any trademarks are the properties of their respective owners. More on Hyderabad, India. Jobs in Hyderabad.