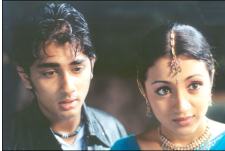 EDITOR RATING
7.0
Performances
Script
Music/Soundtrack
Visuals
NA
NA
NA
NA
Suggestions
Can watch again
NA
Good for kids
NA
Good for dates
NA
Wait to rent it
NA
Technically, Nuvvosthanante Nenoddantana is a chapter-by-chapter rendition of Maine Pyar Kiya, the 1990 Rajshri blockbuster. However, in the individual moments there is very little inheritance from the original, and plenty of innovative conceptualization, helping it ultimately emerge an eminently cheery film. Characterized by an unrelentingly imaginative screenplay (okay, in one half), surprisingly serendipitous performances, slick editing and vivacious music, the film makes up for all the sins you committed this week.

Santosh (Siddharth) is a flaky son of rich parents who will never clear 6 sentences in the Bhagavad Gita. That doesn't stop him, however, from not trying. On a visit to a friend's marriage, he runs into Siri (Trisha), who has been allowed by her doting and possessive brother Siva Rama Krishna (Srihari), a farmer, to attend the same friend's marriage for a week provided she keeps writing letters.

The movie sticks to its original even in dialogues here ("paddhenimidi ellaki chaala chaakachakyam undhe," from the original "attarah saal ke liye kaafi chaalaak ho"), and at the exact moment as Siri is being turned out of the place, in walks Siva Rama Krishna and starts chatting his kid sister up unaware of the crescendo the script has hit. Anyway, it's all he can do to control himself when he finds out what has happened, and takes Siri back with him.

Siddharth finds out what has happened when he sees the newspapers the next day. Okay, that's obviously a joke - Siddharth doesn't read newspapers and all. Surprisingly, he still knows that India has a hinterland, and progresses on to Siri's village to claim his love. What he doesn't know is that the best part of the movie is over, and that it's all downhill from here. So he goes and accepts a challenge from Siva Rama Krishna that he'll grow more bags of grain than the latter to win Siri's hand.

We all know that love can make ordinary people do extraordinary things, but it can't be much fun trying to watch a 20-year-old with no knowledge of seeds or fertilizers or pesticides or earthworms, no understanding of farming and no one to help him, single-handedly ploughing an acre and beating a man who's been at this profession for perhaps 30 years and who has support staff. The fun element completely deserts the film - there are hardly any instances in the second half when a smile crosses your lips or you feel like clapping, unless you have the habit of randomly smiling and clapping.

Siddharth is surprisingly good for a newcomer, and scores far higher on acting than several star-relatives that get the backdoor entry into Tollywood. Trisha, in her half-sari and bindi act, makes village belles look more understated than you think she can. Srihari doesn't have much to do, but that can never be reason enough for him not to be out there. The songs are flamboyant, though a lot more could've been done of the song that promisingly starts "Siva Siva Murthivi Gananatha". But for a film directed by Prabhudeva, the film is surprisingly not up there in choreography.

On the whole, a fully worthwhile outing for your family.
Share. Save. Connect.
Tweet
NUVVOSTHANANTE NENODDANTANA SNAPSHOT

See Nuvvosthanante Nenoddantana full details
NUVVOSTHANANTE NENODDANTANA USER REVIEWS
1 - 5 OF 5 COMMENTS
POSITIVE  |  NEGATIVE |  NEWEST  |  OLDEST  |  MOST HELPFUL  |  LEAST HELPFUL
USER RATING
6.0
219 USERS
Performances
Script
Music/Soundtrack
Visuals
NA
NA
NA
NA
Can watch again - NA
Good for kids - NA
Good for dates - NA
Wait to rent it - NA
Shyam Khatwani on 27th May 2005, 11:40pm | Permalink
I HAVE SEEN THE SONG OF THE RAILWAY STATION ON TV.NEEDLESS TO SAY THE DIRECTOR HAS DONE A REMARKABLE JOB ALONG WITH THE ACTORS AND THE MUSICIANS WITH THE TEAM.I REALLY LOVE THE NATURALITY OF THE SECNCE ALONG WITH THE ACTING OF TRISHA.
RATING
10
Jagadeswara Reddy on 16th May 2005, 7:32pm | Permalink
the movie is excellent

trisha is shown good in the movie

ADVERTISEMENT
This page was tagged for
Nuvvosthanante Nenoddantana telugu movie
Nuvvosthanante Nenoddantana reviews
release date
Siddharth, Trisha
theatres list
Follow @fullhyderabad
Follow fullhyd.com on
About Hyderabad
The Hyderabad Community
Improve fullhyd.com
More
Our Other Local Guides
Our other sites
© Copyright 1999-2009 LRR Technologies (Hyderabad), Pvt Ltd. All rights reserved. fullhyd, fullhyderabad, Welcome To The Neighbourhood are trademarks of LRR Technologies (Hyderabad) Pvt Ltd. The textual, graphic, audio and audiovisual material in this site is protected by copyright law. You may not copy, distribute, or use this material except as necessary for your personal, non-commercial use. Any trademarks are the properties of their respective owners. More on Hyderabad, India. Jobs in Hyderabad.