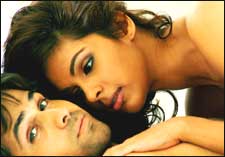 Mithun Verma / fullhyd.com
EDITOR RATING
5.0
Performances
Script
Music/Soundtrack
Visuals
NA
NA
NA
NA
Suggestions
Can watch again
NA
Good for kids
NA
Good for dates
NA
Wait for OTT
NA
Simran (Mallika Sherawat) is a depressed wife. Her husband, Sudhir (Ashmit Patel), loves his work more than her. He's always busy with board meetings and deadlines. Simran only takes this till a point that any loving and caring wife would. And after the 30 seconds are over, she screams her head off and behaves like Sudhir has just poked her with a hot poker in some inappropriate place.

One day, Simran is explaining to Sudhir how she was caught in the rain when an old acquaintance Sunny (Emraan Hashmi) had come to her rescue. Sudhir screams at her to stop it, Sonia, he's busy. Simran's name is not Sonia. He forgot his wife's name!

If you thought that love constitutes taking long walks along seashores and watching the sunset from mountaintops, kindly get your eyes examined. Whatever Mallika and that guy were doing in the promos, it was definitely not walking along the seashore.

What exactly they were doing is better watched than said. It seems Mahesh Bhatt had asked Mallika to do a completely nude scene for the film. Mahesh, Mahesh, even you have to get your eyes examined - what is Mallika wearing in the first place?

Slowly, the discreet affair of Simran and Sunny starts getting out into the open - they do it on building tops and open elevators. It is only a matter of time before Sudhir is going to find out, because he generally has the expression of an open elevator. And Sudhir does find out.

But Simran had just dumped Sunny overwhelmed by the guilt. Still, Sunny tries to force her, and she's forced to drive a dagger into him.

This whole story was narrated by Simran to a police officer (Raj Zutshi). It's a good thing she had a photographic memory - the police would've died if she had forgotten the color of her underwear. She's being interrogated because her lover, Sunny, has been murdered.

The police officer listens to the entire narrative carefully, and at the end of it, starts laughing at ultrasonic sound levels. He cannot get over the fact that an unfaithful wife could be doing this - trying to save her husband's life. Because in the other room, Sudhir confesses that he had murdered Sunny.

Sudhir's version of the story is the same till the point of his finding out about his wife's infidelity. Then it seems he goes to confront Sunny. Sunny really pisses him off, saying, 'Jao apni biwi ki garmahat uus pillow par mehsoos karo jo maine uske kamar ke niche lagayi thi.' Sudhir really loses it after this point. How dare he try out pillow positions her husband has never tried before?

That mean pervert that... take that! And that! Then it's all over. Sunny is dead. Really. Promise. We swear. Sunny is dead. Dead. So Sudhir buries the body and all. But after a few days, he gets a note: 'Mujhe pata hai tumne pichle garmi ke raat mein kya kiya tha.' Okay, he just gets a picture of him burying the body.

Who could be blackmailing him? Who has actually killed Sunny? Why doesn't Sudhir get a superhit like his sister Amisha Patel? To know all this, Murder yourself... er, watch it yourself.

Ashmit Patel is a looker, while Emraan Hashmi is not even that. Mallika is quite a bold girl. She says she will not drown in the sea of other wannabes that show skin to get fame. She wouldn't drown - she's got two of the best floatation devices money can buy. But it's unfair to expect her to be a good actress - floatation devices don't act.

And Murder has quite frankly made good use of those, and other paraphernalia that is on offer in a limited budget. It comes out as being average for having a set direction for the plot and for showing some decent dirty scenes. Woohoo, my first oxymoron!
Share. Save. Connect.
Tweet
MURDER SNAPSHOT

See Murder full details
MURDER USER REVIEWS
1 - 8 OF 8 COMMENTS
POSITIVE  |  NEGATIVE |  NEWEST  |  OLDEST  |  MOST HELPFUL  |  LEAST HELPFUL
USER RATING
6.6
120 USERS
Performances
Script
Music/Soundtrack
Visuals
NA
NA
NA
NA
Can watch again - NA
Good for kids - NA
Good for dates - NA
Wait for OTT - NA
Sapna Gopi on 17th Feb 2006, 10:46am | Permalink
i love you e
RATING
6
Rahul on 24th Jan 2005, 11:14pm | Permalink
CRAP - utter filthy idiotic ...err... filth of a movie! This is as close to a softcore movie in Bollywood as we can get... and its not even titillating! ITS PATHETIC!!! Crap like this should not even be listed along with popular releases of the yr!
RATING
2
Anshuk Jain on 21st Nov 2004, 6:40am | Permalink
The movie was not that great... but the review by Mithun Verma is hilarious
RATING
6
Chaitanya Psr on 3rd May 2004, 7:23am | Permalink
The director wanted to remake "the unfaithful ",but im sorry he failed very badly. Murder is nothing but a third grade erotica.i dont think it will last long .the final word

ADVERTISEMENT
This page was tagged for
Murder hindi movie
Murder reviews
release date
Mallika Sherawat, Ashmit Patel
theatres list
Follow @fullhyderabad
Follow fullhyd.com on
About Hyderabad
The Hyderabad Community
Improve fullhyd.com
More
Our Other Local Guides
Our other sites
© Copyright 1999-2009 LRR Technologies (Hyderabad), Pvt Ltd. All rights reserved. fullhyd, fullhyderabad, Welcome To The Neighbourhood are trademarks of LRR Technologies (Hyderabad) Pvt Ltd. The textual, graphic, audio and audiovisual material in this site is protected by copyright law. You may not copy, distribute, or use this material except as necessary for your personal, non-commercial use. Any trademarks are the properties of their respective owners. More on Hyderabad, India. Jobs in Hyderabad.