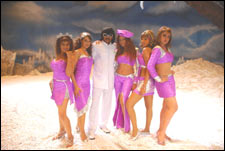 EDITOR RATING
3.0
Performances
Script
Music/Soundtrack
Visuals
7.0
1.5
6.0
6.5
Suggestions
Can watch again
No
Good for kids
No
Good for dates
No
Wait for OTT
No
It's not uncommon to see a man refusing to pay alimony after a divorce even after being asked repeatedly. And if it is not his divorce, he'll even be justified. Joseph (Upendra) however is a complete cheat - forget alimony, he runs away with his wives' jewelry and money immediately after getting married.

By the time this has happened 5 times, he becomes the most celebrated criminal in town - men want tips from him and to toast him, and women want pits for him and to roast him. The cops finally catch someone who the victims claim looks exactly like him, but this person says he is Panchamrutham, an innocent villager, and not Joseph.

The trail happens in the court of judge Janaki (Lakshmi), and each of the victims comes to give evidence against him. First is a model Rekha (Brinda Parekh), who Joseph introduced himself to as Vijay Mittal, a super-rich businessman based at London. Rekha is willing to marry anyone super-rich as long as he's alive, or can at least sign. She quickly weds him, but he takes her own money and vanishes the next day.

Next is Shanti (Saloni), who's crazed of movie stars and who he's introduced himself to as Samarasimha Reddy, a fierce Seema factionist warrior quite akin to the one Balakrishna played. Shanti is so dumb, she would have believed him even if he told her he was Balakrishna himself, or even Simran. His next victim, Radha (Natania Singh), however, has higher standards - she wants to marry only God.

Now people in AP will believe that you are God only if you have acted in movies before, and to overcome this hurdle, Joseph acts as a swamiji, a messenger of God. He tells her that he can take her to God quite easily, and all that he needs from her are devotion for the Almighty, love for her fellow human beings, and all her jewellery in an easy-to-carry bundle. Radha eagerly obliges, and very quickly, she is, er, detached from her belongings.

Finally entering the bone is Nandita (Suman Ranganath), a rich and go-getting businesswoman divorced from her husband since he was too homely and not aggressive enough for her. Given the kind of clothes she wears, anyone who marries her would have to carry a suicide note in one hand and two in his pocket as back-up, anyway. Nandita had hired Joseph as a secretary, and then fell in love with him and married him. He vanishes with all her money, too. Normally we'd sympathetically say she's left with just the clothes she's wearing, but in her case, it feels like he's stolen them too.

Anyway, Panchamrutham mouths some solid lines in his defence in the court, and what comes out is something you'd know about Upendra if you saw Raa (and are still alive) - he's a closet misogynist. Actually, not even closet. We at fullhyd.com don't enter debates about if women are indeed more evil than they're given credit for, especially when we're celebrating emerging from an Upendra / Thriller Manju combo movie unscathed, but it's hard not to see the plenty of men so totally rooting for the suspect lines.

Buddhimathudu lacks completely in any logic all through, and when the central conceit is unveiled in the end, you start panting and thumping the armrests in disbelief. Upendra is a fine actor but a rotten writer, and if it is that he knows more about Kannada audiences than us (this is a movie dubbed from Kannada) that he comes up with stuff like this, well, we're not completing this sentence so as to stay politically correct.

The babe factor is high as it is in all Upendra movies - there are 5 heroines, 6 if you count Pooja Gandhi twice given her size. And they show enough flesh for 12 heroines. But they all do a fine job acting-wise, too, with Gandhi being particularly expressive. The music and choreography are slick, too, though the awful lip-sync will make you weaker if it doesn't kill you.

Like we at fullhyd.com always say, it's okay to watch an Upendra movie as long as you don't get caught. Especially standing in a queue. Fortunately, the latter certainly doesn't seem likely with this one.
Share. Save. Connect.
Tweet
BUDDHIMANTHUDU SNAPSHOT

ADVERTISEMENT
This page was tagged for
Buddhimanthudu 2009 telugu movie
buddhimanthudu upendra full movie download
buddhimanthudu movie upendra full movie
buddhimanthudu telugu full movie download
Bhudimanthudu telugu movie download
Follow @fullhyderabad
Follow fullhyd.com on
About Hyderabad
The Hyderabad Community
Improve fullhyd.com
More
Our Other Local Guides
Our other sites
© Copyright 1999-2009 LRR Technologies (Hyderabad), Pvt Ltd. All rights reserved. fullhyd, fullhyderabad, Welcome To The Neighbourhood are trademarks of LRR Technologies (Hyderabad) Pvt Ltd. The textual, graphic, audio and audiovisual material in this site is protected by copyright law. You may not copy, distribute, or use this material except as necessary for your personal, non-commercial use. Any trademarks are the properties of their respective owners. More on Hyderabad, India. Jobs in Hyderabad.