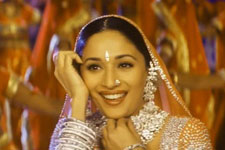 Chinmayi Sirsi / fullhyd.com
EDITOR RATING
3.0
Performances
Script
Music/Soundtrack
Visuals
NA
NA
NA
NA
Suggestions
Can watch again
NA
Good for kids
NA
Good for dates
NA
Wait for OTT
NA
It was good when Raj Kapoor did it in Sangam. Him being him, he had class. But when Saif Ali Khan plays the martyr in a slip-shod movie by Lawrence De'Seuza, you kinda feel sorry. For yourself. Aarzoo is the kind of film that makes you want to tear the cast's hair out, but since you can't do that, you must settle for tearing out a little of your own.

Pooja (Madhuri Dixit) is the daughter of Dayashankar (Amrish Puri, that sweet old man who is forever misused by the industry, this film being no exception), a rich and successful businessman who keeps repeating that he owes his fortunes to his late friend Rajapal. In one of those Bollywood ishtyle flashbacks, you get to see that Rajpal was killed by Kailashnath, his sleazy half-brother. Dayashankar promises the dying Rajpal that he will look after his little son, Amar. Amar is sent abroad to study.

Back in the future, Pooja grows up and has nothing better to do than to shop all day with her friends. Tired of that, she decides to fall in love with Vijay (Akshay Kumar), a pilot with no known family. This happens through a series of incidents that are supposed to be funny, but are juvenile and rather irritating. Amar (Saif Ali Khan) returns, and surprise, he too is in love with Pooja. But he decides to 'sacrifice' his love, in a quintessentially Bollywood gesture. Against papa Puri's better judgement but seemingly with his blessings, Pooja and Vijay get engaged.

But Vijay is tragically killed in an air crash, and Pooja is forced to marry Amar so that she can give her unborn baby a name. The movie plunges into more meaninglessness as Vijay returns after a few years, alive and ready to kick some you-know-what.

The movie is full of stereotypes - the story, the dialogues, the music, the performances, everything. There is not one original shot, not one original thought that has gone into the making of Aarzoo. Lawrence D'Souza, who gave Saajan, better get his act together. Madhuri Dixit looks ordinary, with her usual spark missing. Akshay Kumar and Saif Ali Khan need some acting lessons.

There is really no reason for you to watch Aarzoo, except if you need a novel haircut.
Share. Save. Connect.
Tweet
AARZOO SNAPSHOT

ADVERTISEMENT
This page was tagged for
aarzoo movie90s
Indian movie .arzoo.3g.com
aarzoo hindi movie
aarzoo full movie online hindi links
Aarzoo full movei
Follow @fullhyderabad
Follow fullhyd.com on
About Hyderabad
The Hyderabad Community
Improve fullhyd.com
More
Our Other Local Guides
Our other sites
© Copyright 1999-2009 LRR Technologies (Hyderabad), Pvt Ltd. All rights reserved. fullhyd, fullhyderabad, Welcome To The Neighbourhood are trademarks of LRR Technologies (Hyderabad) Pvt Ltd. The textual, graphic, audio and audiovisual material in this site is protected by copyright law. You may not copy, distribute, or use this material except as necessary for your personal, non-commercial use. Any trademarks are the properties of their respective owners. More on Hyderabad, India. Jobs in Hyderabad.