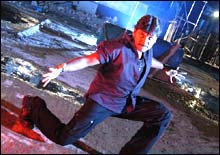 EDITOR RATING
6.0
Performances
Script
Music/Soundtrack
Visuals
NA
NA
NA
NA
Suggestions
Can watch again
NA
Good for kids
NA
Good for dates
NA
Wait to rent it
NA
Most people who’ve seen Lawrence’s last movie will remember it as an encyclopedia of movie clichés (the rest will not remember anything, with some not remembering anything in their life until then). So when you go to Muni, you can be forgiven for thinking that it will be another series of great dances showcased by a whole lot of emptiness.

Which is actually true. Muni is indeed a whole lot of emptiness. But that is for a different reason - Muni is a ghost. That’s right - the kind of thing most people turn into after they are dead (and we know this for a fact). Lest we be accused of revealing the suspense, it’s not our fault - the movie starts with a ghost coming out from under water. You might ask us just how we know that it is a ghost, when it could be anything else. Good question. Let’s just say that we at fullhyd.com know a ghost when we see one. We’re shifting out of this office very fast.

Anyway, so there’s this ghost that haunts a house in Vizag (which is the capital of Tamil Nadu, in case you did not know). There’s also Ganesh (Lawrence), who is terrified of ghosts from childhood, so much that he never ventures out of home after 6pm. And of all the houses in the world, his dad chooses this one to move into when they get transferred to this city.

Now every ghost has its insecurities, and each handles them in its own specific way - by being determined and belligerent with whoever it meets. That’s the only way to get what you want in your life - or whatever it is that a ghost leads. Our ghost is upset that its rent-free accommodation is being shared by someone else, and expresses its displeasure by appearing for split-seconds in the middle of the night in various states of undress when people wake up to drink water.

One night Ganesh finally takes the Hanuman pendant off, and then the inevitable happens - the interval. You go out for your well-deserved fag, for the first half has been fully worth your while. It’s hilarious in parts, and scares the crap out of you in the rest. It’s hard to believe that this is the same Lawrence who scripted Style (he’s credited for the script and screenplay of this one).

However, he soon helps you believe that. For, the script has now built to a crescendo that is way beyond his competence to handle. The second half starts with Ganesh finding the ghost’s non-Hanuman pendant around his neck, and… okay, we’re not going to spoil things for you. Let’s just say that after hitting a feverish pitch that has you whistling and jiving in ecstasy, it crashlands to become a thoroughly ordinary movie.

All said and done, Muni is just a Lawrence movie - nothing to worry about. The film has all the inconsistencies you want - for example, the ghost has all the special powers to make things burn by looking at them and be at 2 places simultaneously, but takes the road, the main entrance and the stairs to reach its room. Then, it acts as as a cruel, ruthless and heartless stereotype devil at first, but is shown to be a kind, benevolent and reasoning quasi-human later.

Lawrence is fairly good as an actor, and of course, his dances rock - it’s hard to believe as he’s dissolving his bones into his flesh and bending to disastrous angles that this is actually a human. Vedika is pretty expressive, and matches his moves step for step in the song Dhamaal. Rajkiran as Muni puts in a moving performance - there’s a truly talented actor. This is a dubbed film, so be prepared for some sorry lip-sync and lots of Tamil dressing and environment.

The first half is pretty innovative and riotous, and is worth a watch by itself. If you are in the mood for some mindless fun this weekend …then hit a pub or one of the college concerts. If you don’t have enough money for that, then give peace to Munianna’s atma.
Share. Save. Connect.
Tweet
MUNI SNAPSHOT

ADVERTISEMENT
This page was tagged for
muni review telugu
Muni movie Telugu rating
Muni Telugu rating
Muni telugu movie
Muni reviews
Follow @fullhyderabad
Follow fullhyd.com on
About Hyderabad
The Hyderabad Community
Improve fullhyd.com
More
Our Other Local Guides
Our other sites
© Copyright 1999-2009 LRR Technologies (Hyderabad), Pvt Ltd. All rights reserved. fullhyd, fullhyderabad, Welcome To The Neighbourhood are trademarks of LRR Technologies (Hyderabad) Pvt Ltd. The textual, graphic, audio and audiovisual material in this site is protected by copyright law. You may not copy, distribute, or use this material except as necessary for your personal, non-commercial use. Any trademarks are the properties of their respective owners. More on Hyderabad, India. Jobs in Hyderabad.