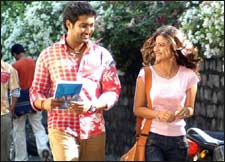 EDITOR RATING
6.5
Performances
Script
Music/Soundtrack
Visuals
7.0
7.5
7.5
7.0
Suggestions
Can watch again
Yes
Good for kids
Yes
Good for dates
Yes
Wait to rent it
No
There's a surprising round of applause from a predominantly male crowd when Satya, playing a Father of a church hearing a confession involving failed love in Gunde Jhallumandi, says that time heals everything.

It's surprising, and it's poignant, but mostly it's a sign of the times we live in that a banal line like time heals everything should connect so much with a lot of male youngsters. It's evidently a theatre filled with a lot of minds undergoing a lot of distinctly individual churn as a romantic tale is unraveling on screen. The stigma attached to men as chauvinists, sexual-abusers and wife-beaters will take time to wear out, but the reality in vast strata of the educated classes is significantly different.

These young men are all badly bruised. And that's because, with all the liberties that she rightfully deserved, the female of the species turned out to be deadlier than the male. Most young men of today vie for female attention than even dream of harassing, and in a few years after they've started, there's a head full of an extremely unfortunate history mostly involving women who didn't quite fit the stereotype, who could put their future clearly above their past, and mostly above their ethics. The men will spend the rest of their lives grieving that they could not match up, without realizing it was the other way round.

Indeed, in a kingdom of blind men, every woman is an alpha woman.

Gunde Jhallumannadi by no stretch deserves an introduction of that depth, but what's a local guide without some occasional sociology? Plus, this is one of those rare fullhyd.com reviews that gush over an Uday Kiran movie, which is a relief for us since there are people who feel we single-handedly wrecked Uday Kiran's career. Okay, there's no one who feels that way, but it's still contrition for us. And we're not going to let a desire to keep it simple get in the way of us making peace with our past.

Gunde Jhallumannadi is a cute romance, spoilt only, like most romances are, by the climax. A good romance has a long and gooey courtship, some pleasant time together showcasing the thrill of being indulged as you take huge liberties with a person of the opposite sex that he/she wouldn't allow anyone else, a brief estrangement over a misunderstanding, and the pining and getting back together. Gunde Jhallumannadi screws up the last 2 parts with some heavy-duty stuff, but it does well enough in the rest to more than survive it.

Balraj (Uday Kiran) comes from a village to Hyderabad to do a BA, and becomes friends with Neelima (Aditi Sharma), a hip but homely girl who is scared of falling in love since she fears that will ruin her career. Balraj flips for her in priority time, but Neelima is conflicted, and to erect a barrier around her, creates a non-existent character called Rajesh as her boyfriend. Balraj is heartbroken, and in an instinctive reaction, creates a fictitious girlfriend of his own called Lavanya, which gets the jealousy glands secreting their juices like waterfalls in Neelima.

There's a lot of eye contact happening between the two in the first half that endears the movie to you. Aditi Sharma is particularly expressive, perhaps the next Genelia if she gets some proper roles. Caught in the classic quandary of fledgling love - don't want to get too close to him, can't take it if he ignores her - her character comes to life as she does her bit in an author-backed role. It's fun as she keeps telling herself to stay within limits - if you have to strongly tell yourself to stay in your limits with someone of the opposite sex, it mostly means it is already too late, and it's all written in her body language.

Uday Kiran is surprisingly good, especially in a couple of emotional scenes for which he would have needed a dupe a few years back. It helps that your expectations are pretty low (and we've screwed it up for him now), but this is also quite likely a revival of a career worth it just for sheer tenacity. Venu Madhav has a fairly ticklish track even if it gets a bit repetitive in the end, and all performances are in general standard.

The music by Keeravani is surprisingly good. I Have A Boyfriend is a rather languid song that Neelima seems to sing primarily to get it done with, but some tracks thereon, including the Golconda Fort True Love and the party dance sequence, are pretty chart-topping material. And a good number of scenes attract catcalls.

The good feel of an awww romance is skunked by the usual suspect - the climax, which sees the director compelled to break the couple up in a nasty fashion, since very, very few directors know how to handle climaxes. Of course, this is a movie, and so it all ends well, which is good since all those jilted lovers who eagerly applaud when a Father says time is a great healer, deserve their hope. Movies are basically denial made into a multi-billion dollar business, and it works for everyone, so who are we to complain?

And if you are too young or untainted to understand that applause, enjoy it while it lasts. Life will happen to you, too.
Share. Save. Connect.
Tweet
GUNDE JHALLUMANDI SNAPSHOT

ADVERTISEMENT
This page was tagged for
Sexcenimalu
sexcenimalu
Gunde Jhallumandi telugu movie
Gunde Jhallumandi reviews
release date
Follow @fullhyderabad
Follow fullhyd.com on
About Hyderabad
The Hyderabad Community
Improve fullhyd.com
More
Our Other Local Guides
Our other sites
© Copyright 1999-2009 LRR Technologies (Hyderabad), Pvt Ltd. All rights reserved. fullhyd, fullhyderabad, Welcome To The Neighbourhood are trademarks of LRR Technologies (Hyderabad) Pvt Ltd. The textual, graphic, audio and audiovisual material in this site is protected by copyright law. You may not copy, distribute, or use this material except as necessary for your personal, non-commercial use. Any trademarks are the properties of their respective owners. More on Hyderabad, India. Jobs in Hyderabad.