Directions for use: Remove brain, store in cool place before entering theater. Keep away from children and expectations. DO NOT subject eyes/senses directly - sanity and sight could be affected.

First aid measures: If you happen to accidentally come in contact with Nanda, wash eyes (to drown tears). See a psychiatrist if migraine persists.

Disposal instructions: Destroy ticket completely (unless you get reimbursement) to avoid pollution and to wipe out all traces of movie and its after-effects. 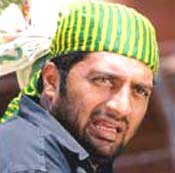 We always knew movies could be bad. But Nanda proves that one can excel even in being bad. In short, it's the epitome of awfully bad movies.

Prakash Raj has always been in the reckoning as a talented actor despite his over-the-top antics and loud mannerisms. So regular moviegoers would have expected a one-liner-a-minute movie delivered with a knockout punch, the Prakash Raj style. But Nanda, with Prakash Raj playing the title role, only manages to knock you out, minus the feel-good factor.

It's rather surprising that an actor of his caliber chose to produce it himself. Normally actors do it when they really believe in the movie. But this one seems to have been made with no conviction whatsoever.

Nanda is a hoodlum whose job profile includes brokerage, burglary, extortion, rape and murder. Until the 17th reel, we are only shown how he goes about his life. He smashes the face of a doctor to end the doctor's strike, he blatantly slaughters a young calf in an orthodox Brahmin's house to evict them from the house, he brands a girl as flesh worker to get rid of her, he adds lizards in orphanage food to kill the kids... There's no end to the sickening misdeeds he commits. Unlike Satya (Ramgopal Verma's gem), there is no starkness about the whole operation. Violence is bad, and when handled callously like in Nanda, it can be downright repulsive. 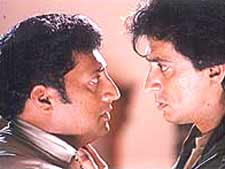 The story moves an inch when an ex-convict (Raghuvaran) taps Nanda's go-getting talent by hiring him to get even with his wife Sharada Devi (Lakshmi). He tells Nanda to get close to Sharada Devi who runs an ashram and wreck her professional and personal life. Nanda's brief is to not just to cheat her but also to betray her ("nammaka droham", as repeated some 112 times in the movie). But then Sharada Devi places so much trust on this baddie for no reason that ultimately he turns good, one minute before the movie ends.

The movie looks more like a training ground for baddies, showing them all that they can do to get their work done. The so-called message towards the end - that good wins over evil - simply gets lost. 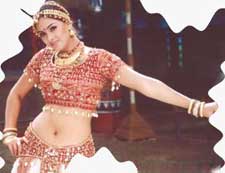 Prakash Raj commits professional harakiri with Nanda. He has to do 10 good ones to undo this. It is unfortunate that there is not a single memorable sound byte of this man who made his way up merely by yapping away. Meena has nothing much to do except try occasionally to change him, which she does not succeed in anyway. If you are expecting Simran in the movie (as shown in the posters), forget about her. She is only in a lousy 'native' item number.

ADVERTISEMENT
This page was tagged for
Nanda telugu movie
Nanda reviews
release date
Prakash Raj, Meena
theatres list
Follow @fullhyderabad
Follow fullhyd.com on
About Hyderabad
The Hyderabad Community
Improve fullhyd.com
More
Our Other Local Guides
Our other sites
© Copyright 1999-2009 LRR Technologies (Hyderabad), Pvt Ltd. All rights reserved. fullhyd, fullhyderabad, Welcome To The Neighbourhood are trademarks of LRR Technologies (Hyderabad) Pvt Ltd. The textual, graphic, audio and audiovisual material in this site is protected by copyright law. You may not copy, distribute, or use this material except as necessary for your personal, non-commercial use. Any trademarks are the properties of their respective owners. More on Hyderabad, India. Jobs in Hyderabad.