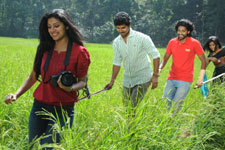 Kritika Deval / fullhyd.com
EDITOR RATING
3.0
Performances
Script
Music/Soundtrack
Visuals
5.0
3.0
5.0
5.0
Suggestions
Can watch again
No
Good for kids
No
Good for dates
No
Wait for OTT
No
"Undile Manchi Kalam Mundu Munduna", as you can tell from the title, the trailers, the posters and just about every other glimpse of the film you can get prior to entering the theatre, is a slice-of-life, feel-good film. This is the kind of film that strives to make you happy with your own life by narrating the neat resolution of the little snags hit by the yarn that makes up the fabric of life, and we all know how Shekhar Kammula has us positively humming with fuzzy feelings as we walk out of the theatres after having partaken of his slices of life in this genre.

Arun Dasyam's UMKMM also has you fuzzy - only, it's fuzzy in the head. It leaves you fuzzy with confusion, fuzzy with boredom, and, en fin, fuzzy like in a coma.

Dhana (Karthik) and Raju (Sudhakar Komakula) (get it, get it, get it?) are best friends with dreams far beyond their means. Raju wants to play hockey at a national level, while Dhana wants to become a rockstar, something that should really be baffling to an Indian audience considering that our own "rockstars" invariably fade into oblivion in a hurry.

This sub-plot is neatly set aside when the boys fall in love - Dhana with Pari (Nitika) and Raju with Vijju (Avantika Mohan). The boys also get into street fights, nurse a sick parent, and struggle to make it as their girlfriends... Oh, wait - that would've been a spoiler, although when you eventually get around to it, you'd hardly think that the interminable first half was worth it, even though the ending is almost a benediction after the equally interminable second chapter.

UMKMM is a painstakingly obvious attempt at recreating Kammula's magic, but fails miserably by virtue of that very painstaking nature. The thing about slice-of-life stories is that, since you cannot generate interest via outlandish schemes and untold dangers, you must have conviction in the narratives of the lives you portray. What Dasyam does, however, is pick out a genre, and fill up a couple of hours with a variety of scenes that, taken together, approximate the sort of movie he had in mind.

Despite half-decent actors, the lackluster plot and the snooze-worthy lines bore you when they don't utterly exasperate you. For a supposedly down-to-earth film, the protagonists find themselves in far too many contrived situations. Even the makers' idea that passion for a chosen vocation is more important than a stable job or society's expectations is dealt with in a passion-less manner. Then, there are the utter lack of connectivity and focus as the screenplay moves on. You often get the feeling that you're at an improv hosted by 5-year-olds.

Sudhakar and Karthik tease you with what could've been good performances had their characters been better realized. Avantika is pretty and bubbly, and, as is usual in Telugu cinema, portrays a character where the nuances of role and dialogue don't matter too much. Nitika doesn't have much to do. Vijaya Naresh and Radhika are wasted in roles that are flat enough to sit on.

The camera work and settings are terribly dull and don't create an iota of interest, while the background score could come of use to new parents. The songs are a bit better, and, shockingly enough, improve the cinematography.

In all, Undile Manchi Kalam Mundu Munduna does nothing so much as make the average middle-class existence seem like the most dreary in the world. As this existence includes most of the world's population, you'd probably be better cheered by your own raucous homes than a sanitized and sentimentalized version of the same.
Share. Save. Connect.
Tweet
UNDILE MANCHI KALAM MUNDU... SNAPSHOT
UNDILE MANCHI KALAM MUNDU MUNDUNA SNAPSHOT 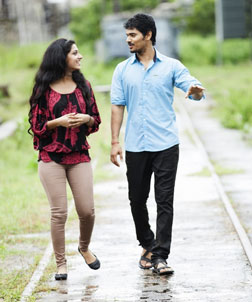 ADVERTISEMENT
This page was tagged for
Undile Manchi Kalam Mundu Munduna telugu movie
Undile Manchi Kalam Mundu Munduna reviews
release date
Sudhakar, Avantika Mohan
theatres list
Follow @fullhyderabad
Follow fullhyd.com on
About Hyderabad
The Hyderabad Community
Improve fullhyd.com
More
Our Other Local Guides
Our other sites
© Copyright 1999-2009 LRR Technologies (Hyderabad), Pvt Ltd. All rights reserved. fullhyd, fullhyderabad, Welcome To The Neighbourhood are trademarks of LRR Technologies (Hyderabad) Pvt Ltd. The textual, graphic, audio and audiovisual material in this site is protected by copyright law. You may not copy, distribute, or use this material except as necessary for your personal, non-commercial use. Any trademarks are the properties of their respective owners. More on Hyderabad, India. Jobs in Hyderabad.