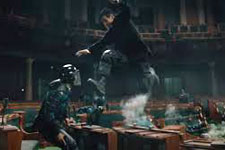 Punarvasu Pendse / fullhyd.com
EDITOR RATING
6.0
Performances
Script
Music/Soundtrack
Visuals
6.0
4.0
3.0
8.0
Suggestions
Can watch again
Yes
Good for kids
No
Good for dates
No
Wait for OTT
Yes
Attack is a strange film to review. And we mean it, we were genuinely flummoxed. Was this meant to be a fresh new take on desi action films, where the main man has an actual (pseudo-) scientific reason to be a one-man army? Was it meant to be a commercial film that wanted to capitalise on the success of similar films - cramming in as many tropes and ideas as one could in two hours? Or was it a clever parody of jingoistic action flicks like John's Abraham's last action hero outing?

The answer, we suspect, is all and none of these - Attack is an attempt at making a fresh Bollywood action movie that borrows elements from successful Hollywood action flicks to provide the audience with a believable yet entertaining narrative. To his credit, director Lakshya Raj Anand manages to take John Abraham's vision (the story is Abraham's brainchild) and delivers a film that is far better than one would expect from reading its plot summary.

The plot is nothing new - brave soldier Arjun Shergill (John Abraham) loses everything near and dear to him in a terrorist attack, and has to take up the mantle of a super-soldier. With the help of Dr. Saba Qureshi (Rakul Preet Singh), and his handler Subramiam (Prakash Raj), Arjun learns to trust his instincts and get back at those who had threatened his country.

Attack already has a sequel planned, as revealed by it being called "Part One" - and that means that its creators are in it for the long haul, believing in its potential. And honestly, we don't blame them - Attack was this close to being a fun mainstream entertainer. It is the kind of movie that, while requiring a healthy amount of suspension of disbelief, never quite ventures into Salman Khan territory. Even if the science (fiction) background of Abraham turning into a super-soldier is flimsy at best, we have seen plenty of Hollywood movies with similarly flimsy explanations that we have taken at face value, and ended up enjoying. Attack has plenty of fantastic action sequences, featuring some of the better visual effects we've seen employed in a Bollywood movie. Despite the abundance of patriotism on display here, there is no jingoistic hate cry (or even a mention of the neighbouring country that is always a convenient villain-breeding-ground).

Unfortunately, the story is very, very basic, the characters are generic and none-too-appealing, and the dialogues are atrocious. Even the action sequences start to get less appealing due to how much they lean into a perplexing first person point of view - why do otherwise excellent fighting sequences have to remind us of low grade video games?

And while blatant jingoism is absent, the villain is still your stereotypical Muslim terrorist, and religious motifs have been haphazardly shoehorned into an otherwise tightly edited film. The random bhajan that started playing during what was supposed to be powerful scene showing Shergill turn into the super-soldier actually had us laughing due to how out of place it felt.

John Abraham is a force to watch, in peak physical shape despite approaching fifty years of age. He carries the movie on his broad shoulders ably. Jacqueline Fernandez would be a cameo appearance in our books, but she is credited as the heroine in a role that gives her nothing to work with - her character in Attack is an exact copy of her role in Bachchhan Paandey. Rakul Preet Singh tries her best, and is ultimately let down by the script - a pattern which repeats in the case of Prakash Raj. Ratna Pathak Shah seems set to have an important role until she suddenly disappears from the movie, which is a bit surprising.

The most baffling part of the movie is its score. At times, the background music elevates the scene playing in front of you, such as some of the Parliament approach shots. But this spell is immediately broken when you get hit with prayers, electronic music or heavy rock for no particular rhyme or reason. Attack doesn't have a single hummable track, either.

Attack, all said and done, is going to be deeply polarising. For some it will be the movie that changed their idea of Hindi action films, and bridged the visual effects gap between Hollywood and Bollywood. For others, it will be unbearable with its cringy dialogue and unintentional humour. At the very least, however, it is a tightly-paced action film - paisa vasool.
Share. Save. Connect.
Tweet
ATTACK - PART 1 SNAPSHOT 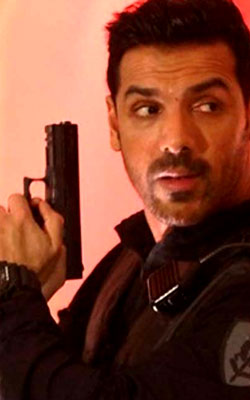 ADVERTISEMENT
This page was tagged for
Attack - Part 1 hindi movie
Attack - Part 1 reviews
release date
John Abraham, Jacqueline Fernandez
theatres list
Follow @fullhyderabad
Follow fullhyd.com on
About Hyderabad
The Hyderabad Community
Improve fullhyd.com
More
Our Other Local Guides
Our other sites
© Copyright 1999-2009 LRR Technologies (Hyderabad), Pvt Ltd. All rights reserved. fullhyd, fullhyderabad, Welcome To The Neighbourhood are trademarks of LRR Technologies (Hyderabad) Pvt Ltd. The textual, graphic, audio and audiovisual material in this site is protected by copyright law. You may not copy, distribute, or use this material except as necessary for your personal, non-commercial use. Any trademarks are the properties of their respective owners. More on Hyderabad, India. Jobs in Hyderabad.