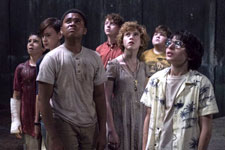 Vaishnavi Kulkarni / fullhyd.com
EDITOR RATING
8.5
Performances
Script
Music/Soundtrack
Visuals
9.0
8.5
8.0
8.0
Suggestions
Can watch again
Yes
Good for kids
No
Good for dates
No
Wait to rent it
No
Watching a movie adaptation of a well-loved book that is both interesting enough for the unfamiliar and earns the approval of fans of the novel is a rare occurrence. Few films can walk the line between preserving originality and modifying parts of the book to add aspects of greater visual appeal. It (2017), however, manages to do so with ease, and maintains its balance with grace. The film is far from the first of cinematic adaptations of Stephen King's novels, nor will it be the last, but Andy Muschietti's vision of the iconic tale is certainly one of the best.

After the 1990 miniseries, It (2017) has resurfaced after 27 years with more murder and gore - much like the eponymous child-hunting evil being that haunts the sewers of Derry. Chapter One of this two-part saga deals with the events that occur when the protagonists are all pimply young pre-teens residing in the fictional town of Derry. Set in the 80s, the film is rife with pop-culture references to that decade - much like Netflix's Stranger Things, it capitalizes on the audience's nostalgia for bygone times.

For the oblivious onlooker, Derry appears to be a quiet suburban town like any other, but this facade is as precarious as a house of cards in a hurricane. Evil lurks beneath the surface, one as old as the town itself. The tragedies are set into motion with the disappearance of one child and the murder of another, and the members of the Losers' Club - a group of 7 kids united by a common enemy - find themselves in the thick of things.

The clown pranks have gotten rather out of hand in Derry, and the harrowing sequence of the encounter of little Georgie Denbrough (Jackson Robert Scott) with Pennywise the Dancing Clown (Bill Skarsgard) is the catalyst that sets off the chain of events that comprise the movie's plot. Forced together by the torment of a psychopathic bully, Henry Bowers (Nicholas Hamilton), Georgie's older brother Bill (Jaeden Lieberher), Eddie (Jack Dylan Grazer), Richie (Finn Wolfhard), Stanley (Wyatt Oleff), Ben (Jeremy Taylor), Mike (Chosen Jacobs) and Beverly (Sophia Lillis) soon realize that all of them have borne witness to terrifying, inexplicable things that most inhabitants of Derry choose to turn a blind eye to. Bill is determined to get to the root of the sinister happenings that have befallen him and each of his friends. The band of misfits decide to face the evil head-on and put an end to it, though that is easier said than done.

The film is as much a coming-of-age movie as it is a horror film, with an emotional undercurrent tied to Georgie and Bill that makes the story resonate with you far more than your regular, run-of-the-mill horror flick. Its drawback is that it is not scary enough to fit the bill of a horror movie. The story is about friendship, unity and conquering one's fears, all occurring in an atmosphere of dread built by messed-up family dynamics, eerie imagery and sequences that alternate between rather funny and genuinely terrifying - the film is far more than mere gore and jump scares.

The script is very well-written, and the dialogues will make you laugh in one moment and cry in the next. The cinematography (Chung-Hoon Chung) varies in its tones but is a pleasure to watch. The jarring contrast between bright sunlight and countryside roads, and the dark manifestation of a child's deepest fears is a nice departure from the usual style of darkened hallways adopted by horror films (though there are plenty of those scenes, too). The visual effects, though comical at times, are neatly done, and stay with you for a while after the credits roll. The musical score reflects the mood of the scene appropriately, varying from chilling to poignant to optimistic.

The cast does a stellar job, despite the young ages of most of the main actors. Lieberher is perfect as Bill, and the amount of feeling with which he talks about his little brother is heartbreaking, and touches those who have a younger sibling themselves, in particular. Sophia Lillis is wonderful as Beverly Marsh - the character's creepy, disturbing relationship with her father that reeks of child abuse, the slut-shaming that she is subjected to and the strength she shows in spite of her lot are not easy to portray, yet Lillis is spot on. Finn Wolfhard of Stranger Things fame has great comic timing and does well as the witty, impulsive and volatile Richie Tozier.

Bill Skarsgard is quite frightening as Pennywise. Playing an evil clown is a dangerous game - if you try too hard, you might end up making the audience laugh instead of cowering in fear - but Skarsgard's cheerfully hungry voice and threatening, humorless smile invoke the appropriate amount of fear when beheld. Jackson Scott deserves a special mention for his short (yet essential) part as Georgie - he makes you love him in the few short minutes he is afforded on screen.

If Harry Potter was for adults, It would be a particularly bloodthirsty Boggart. If you enjoy an intriguing plot and well-developed characters and aren't afraid of a little blood and murder, this movie is a good pick for you.
Share. Save. Connect.
Tweet
IT SNAPSHOT 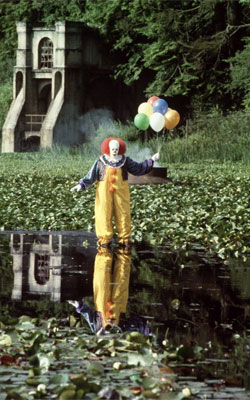 ADVERTISEMENT
This page was tagged for
It english movie
It reviews
release date
Jaeden Lieberher, Jeremy Ray Taylor
theatres list
Follow @fullhyderabad
Follow fullhyd.com on
About Hyderabad
The Hyderabad Community
Improve fullhyd.com
More
Our Other Local Guides
Our other sites
© Copyright 1999-2009 LRR Technologies (Hyderabad), Pvt Ltd. All rights reserved. fullhyd, fullhyderabad, Welcome To The Neighbourhood are trademarks of LRR Technologies (Hyderabad) Pvt Ltd. The textual, graphic, audio and audiovisual material in this site is protected by copyright law. You may not copy, distribute, or use this material except as necessary for your personal, non-commercial use. Any trademarks are the properties of their respective owners. More on Hyderabad, India. Jobs in Hyderabad.