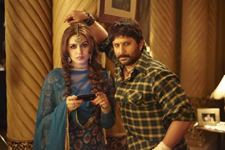 Neha Mathur / fullhyd.com
EDITOR RATING
7.0
Performances
Script
Music/Soundtrack
Visuals
8.0
6.0
6.0
8.0
Suggestions
Can watch again
Yes
Good for kids
No
Good for dates
Yes
Wait to rent it
No
After Ishqiya, director Abhishek Chaubey returns yet again to the Hindi hinterland with the escapades of his impish crooks, Khalujaan and Babban, who find themselves, needless to say, in a ditch! Some things never change.

However, unlike its predecessor, which was a noirish caper, Dedh Ishqiya is more of a lumbering buggy ride. It demands to be savoured, and you will not be entertained if you are in a hurry. Be it so that you are in the mood for instant gratification, head for a different movie hall.

We find ourselves in Mahmudabad, a feudal landscape soaked in delicious shayari and devious pageantry. Where a woman is wooed with flair and utmost devotion to the point of "junoon", but most often reduced to becoming a man's "object" of affection.

It is here that we meet Begum Para (Madhuri Dixit), a dignified widow, who in accordance with her late husband's wishes must find a suitor for herself as well as the noble estate. In a world where woman is synonymous with chattel, a string of lovers/opportunists rise to the surface, each hoping for some form of benefit from the alliance.

With help from her confidante, Muniya (Huma Qureshi), the Begum orchestrates a "swayamvar" of sorts, calling upon the best poets of the land. Who should come to the fore, if not ishqiya Khalu (Naseeruddin Shah), the incurable love puppy. And who should follow after, if not the ever-impudent Babban (Arshad Warsi).

The first half of Dedh Ishqiya unravels, or in this case, entangles, at its own pace, akin to the dreamlike romance of yore. It resembles a glittering masquerade, both, in terms of the banquets and duels that lead up to the swayamvar as well as the masked intentions of the lead characters.

The suitors try and win over their ladylove with exquisite shayari and ghazals, which make up a large bit of the first half. The dialogue is predominantly in chaste Urdu, and despite the sub-titles, those unaware of Urdu poetic traditions might find themselves fiddling with their phones.

The fusty air of cobwebbed nobility is juxtaposed with lewd bickering by Khalu and Babban, just as the archaic chandeliers share space with iPhone 5s. The echo and fading colours of the feudal lifestyle are recreated such that the backdrop becomes a character too.

This uneasy pairing of the old and new is represented in a new rival, Jaan Mohammad Khan (Vijay Raaz), a foul-mouthed MLA who wants to turn Nawab. No doubt, the comely mushairas and spouting of poetry very soon give way to abuse and assault. While only a local audience will get the nuances of the rustic, full-blooded speech of the interiors of Uttar Pradesh, the bawdy humour does translate and deliver guffaws.

Dedh Ishqiya summons an air of nostalgia, and lulls you into half-believing that the film is as calm as Begum Para's cool exterior. But her palace is crumbling, and she, along with her Muniya, must find a way out. The camaraderie between Para and Muniya is sublime if not mystifying.

And though they employ the usual feminine tropes to escape from sticky situations, they show grit and fierce conviction. They will not be rescued!

Sadly, we are left wanting more of their relationship, and more of Begum Para. A screenplay is not a novel, but the melancholic Begum's character is somewhat sketchy. We are left dissatisfied.

While Madhuri Dixit is a treat to watch as the enigmatic Begum Para, the real showstopper is Huma Qureshi. She is incredibly convincing and confident on screen, as are Naseeruddin Shah and Arshad Warsi. The chemistry between the two men is spot on, even better than in Ishqiya. The peripheral actors, rustic to the core, also smack of authenticity.

Though the plot is somewhat predictable, it does not take away from the viewing experience, because the twists in the second half are more than satisfying. The music composed by Vishal Bhardwaj lacks punch, but the pieces of shayari in the film make up for it.

Dedh Ishqiya's ideal viewer will possess a sensibility that understands the chasm between the old and the new but also sympathises with the embers of a dying world order remnant in the glorious new.

Equally, this viewer will be able to chuckle at a dirty joke! 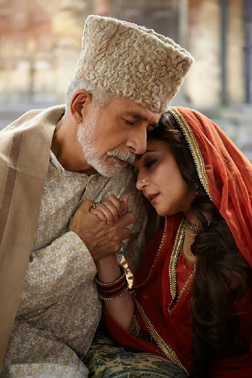 ADVERTISEMENT
This page was tagged for
Dedh Ishqiya hindi movie
Dedh Ishqiya reviews
release date
Arshad Warsi, Naseeruddin Shah
theatres list
Follow @fullhyderabad
Follow fullhyd.com on
About Hyderabad
The Hyderabad Community
Improve fullhyd.com
More
Our Other Local Guides
Our other sites
© Copyright 1999-2009 LRR Technologies (Hyderabad), Pvt Ltd. All rights reserved. fullhyd, fullhyderabad, Welcome To The Neighbourhood are trademarks of LRR Technologies (Hyderabad) Pvt Ltd. The textual, graphic, audio and audiovisual material in this site is protected by copyright law. You may not copy, distribute, or use this material except as necessary for your personal, non-commercial use. Any trademarks are the properties of their respective owners. More on Hyderabad, India. Jobs in Hyderabad.