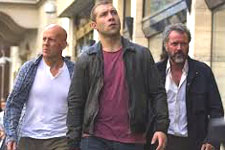 Kritika Deval / fullhyd.com
EDITOR RATING
5.5
Performances
Script
Music/Soundtrack
Visuals
6.5
4.0
6.0
6.5
Suggestions
Can watch again
No
Good for kids
No
Good for dates
No
Wait for OTT
Yes
A Die Hard movie is like a roller coaster - once you're on it, there's no getting off. And that would be the only reason for you to watch A Good Day To Die Hard, because the journey of a hero like John McLane (Bruce Willis) deserves to be seen to its end.

What with all the other "Ye Olde Badasses" having given their attendance (The Last Stand, The Expendables 2, Skyfall, yada yada yada), it's time for McLane to give his own exaggerated nod to good 'ol fashioned Hollywood action cinema, for, the 5th installment of the Die Hard series is absolute, unabashed tribute cinema, right from Sr. McLane's hackneyed lines to Jr. McLane's kickass-ery.

Let's get the story out of the way first. Jack McLane (Jai Courtney) is in a Russian prison, and perpetually-estranged daddy dearest (John McLane, Bruce Willis) must go get him out. John goes off to Moscow thinking that his son was involved in drugs or something, only to find out that his son is in the CIA doing "spy shit", and that John had messed up a mission that had been five years in the making.

And what is this mission? We don't quite know. There was something about "weapons-grade uranium", Chernobyl, "lots of money to be made", dancing, massages, maybe nuclear war and plans to take over the world... But, who really cares?

We're in it to watch McLane kick some serious butt, and that is exactly what he does. As long as you're watching things get blown up, blood being spilt, cars crashing and people being thrown about like ping pong balls, you're OK. It is only when you start thinking about stuff, like Chernobyl being the result of a scam conducted by two oily little men, and... (for the retention of our own sanity, this is where we stop), that the whole thing blows up. Solid scripting and great direction aren't exactly John Moore's strong suits. It is the guy who messed up The Omen we're talking about.

And then there is the whole father-son trope - cute, but entirely underwhelming. Courtney goes from being a stubborn bulldog to an eager little puppy. Willis himself seems like a stand-up comedian who's run out of jokes and is awkwardly rehashing old ones. You'll still laugh, but more because you're in on it.

The villains are the biggest bummers. There are too many of them, and all of them are absolutely lame. Just like most of the lines in the film. We lost count of the number of times we heard the audiences echo the lines, like good little children in a class room.

The action is pretty spectacular in parts, in a "don't ask, don't tell" way, and monotonous in others. But the spectacular parts totally make up for the ones that fall flat. The questions you absolutely do not ask involve the video-game-ish way in which our heroes get tossed around.

In fact, the whole movie seems kind of like an RPG that's been recorded and screened all over the world. It's still fun, but, you'd just have had a little more fun if you'd been playing it yourself. This particular player seems especially unimaginative.

All in all, Die Hard Part V is for the hardcore fan, the one who'll get that most of the film is an inside joke. If a McLane novice does stumble across it, he won't quite hate himself for it, but he won't pat himself on the back either.
Share. Save. Connect.
Tweet
DIE HARD 5 -... SNAPSHOT
DIE HARD 5 - A GOOD DAY TO DIE HARD (TELUGU) SNAPSHOT 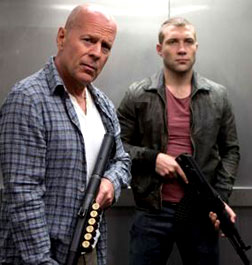 ADVERTISEMENT
This page was tagged for
Die Hard Movie Download in Telugu
die hard 3 telugu dubbed movie download
die hard 4 telugu movie download
Die Hard 4 Telugu dubbed Movie Download
a good day to die hard telugu movie online
Follow @fullhyderabad
Follow fullhyd.com on
About Hyderabad
The Hyderabad Community
Improve fullhyd.com
More
Our Other Local Guides
Our other sites
© Copyright 1999-2009 LRR Technologies (Hyderabad), Pvt Ltd. All rights reserved. fullhyd, fullhyderabad, Welcome To The Neighbourhood are trademarks of LRR Technologies (Hyderabad) Pvt Ltd. The textual, graphic, audio and audiovisual material in this site is protected by copyright law. You may not copy, distribute, or use this material except as necessary for your personal, non-commercial use. Any trademarks are the properties of their respective owners. More on Hyderabad, India. Jobs in Hyderabad.