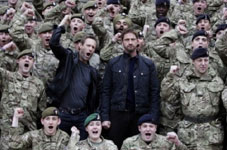 Josh / fullhyd.com
EDITOR RATING
5.5
Performances
Script
Music/Soundtrack
Visuals
5.0
5.0
5.0
8.0
Suggestions
Can watch again
No
Good for kids
No
Good for dates
Yes
Wait to rent it
Yes
"Go Back to F***headistan!" growls Butler to a terrorist. That should help you know what kind of movie this is, and who it is made for. Your business is to quickly identify whether you are likely to enjoy it. It helps if you are patriotic... for America.

That aside, do you like your campy macho action movies? Because London Has Fallen is just that. Campy with a conviction and merrily macho, the film completely justifies its existence by catering to some of our base instincts, and it does it well, too.

The plot is pricelessly preposterous, of course. It hinges on the prospect of a Middle-Eastern arms dealer Barkawi (Alon Moni Aboutboul) - in pursuit of revenge for his daughter who died in a drone strike - managing to infiltrate the British intelligence, plant heaps of his men in the police service, and gain access to London's entire CCTV surveillance system, all without getting under the radar of any intelligence agency across the world. Except, someone who could do that would practically own the world already.

Barkawi does all of that in anticipation of a day when all of the West would send its leaders to London - for the state funeral of the deceased British Prime Minister. So that day, his men take over London, precisely track down where each leader is, and get them off the map. All except the American President (Aaron Eckhart). Because he is being guarded by King Leonidas. (Not this timeline, you say? You think Gerard Butler cares?)

Gerard Butler knows this is his forte, and doesn't sweat it. He plays his Mike Banning-like Rambo, and is both trigger-happy and one-liner-happy. What we don't get is why he wouldn't go all the way and take that shirt off. None of the other actors is expected to go beyond what a daily wage paycheck would demand, and they don't try to, either. Morgan Freeman in particular, as Vice-President Trumbull, is as non-committal as a sophomore on his first date.

Babak Najafi (Director) doesn't waste time on political correctness, consistency, state-of-art CGI or logic. He knows what he's been signed up for. Unstopping, adrenaline pumping action. He delivers it faithfully. Car chases, blasted choppers, underground gunfire, punchlines delivered after and during knife fights... they're all there with unerring regularity.

And he has a knack for making it all move before you can think, and that keeps you occupied for this film's 90-odd minutes. You don't have time to ponder over things like score, dialogue, or performances when you're busy running from action set-piece to action set-piece. These scenes are well-choreographed, though. And that's about all the movie cares about. And that is also what your money's worth.

This isn't exactly the film you need to watch in a theatre. That too with all the censoring benevolently bestowed upon you by the better-knowing powers-that-be. You are perhaps better off with catching this one on TV with a couple of beers when the missus is off to her momma's.
Share. Save. Connect.
Tweet
LONDON HAS FALLEN SNAPSHOT 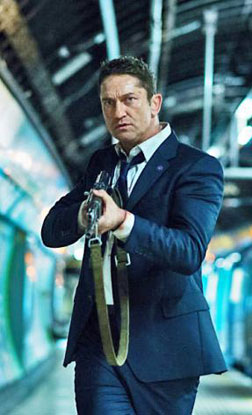 ADVERTISEMENT
This page was tagged for
London Has Fallen english movie
London Has Fallen reviews
release date
Gerard Butler, Aaron Eckhart
theatres list
Follow @fullhyderabad
Follow fullhyd.com on
About Hyderabad
The Hyderabad Community
Improve fullhyd.com
More
Our Other Local Guides
Our other sites
© Copyright 1999-2009 LRR Technologies (Hyderabad), Pvt Ltd. All rights reserved. fullhyd, fullhyderabad, Welcome To The Neighbourhood are trademarks of LRR Technologies (Hyderabad) Pvt Ltd. The textual, graphic, audio and audiovisual material in this site is protected by copyright law. You may not copy, distribute, or use this material except as necessary for your personal, non-commercial use. Any trademarks are the properties of their respective owners. More on Hyderabad, India. Jobs in Hyderabad.