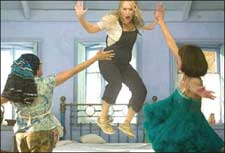 Samrat Sharma / fullhyd.com
EDITOR RATING
5.0
Performances
Script
Music/Soundtrack
Visuals
5.5
3.5
9.0
7.0
Suggestions
Can watch again
No
Good for kids
No
Good for dates
Yes
Wait for OTT
Yes
This is what pop culture has wrought - a hyperlinked film, which in itself is not at all rich in depth or has many narrative strands, but where it has come from is utterly and completely confusing; not to mention very relevant to anyone who wants to watch this. So.

Mamma Mia! is based on Catherine Johnson's Broadway musical hit Mamma Mia!, which itself is based on a Gina Lollobrigida film, and is directed by stage director Phyllida Lloyd, who helmed the West End version of the same play, and they all channel the greatest of ABBA songs, celebrating them in their shininess and endless optimism.

The movie itself will be a little familiar to die-hard Rekha or Saawan Kumar Tak fans, so all three of you can skip this paragraph. For the rest of you, the happy, giddy film tells the story of Amanda Sophie (Amanda Seyfried), about to get married to Sky (Dominic Cooper). She wants her father to give her away, but that remains in question. Ruffling through her mother's diary, she zeros down on three men who could be her father, and invites them to her wedding.

This directly results in Sam Carmichael (Pierce Brosnan), Harry Bright (Colin Firth) and Bill Anderson (Stellan Skarsgard) landing on the Greek island she lives with her mother on. The poor mom (Meryl Streep) is not supposed to know, so she hides them in the family goathouse. Shenanigans happen, hijinks ensue, and it all ends well in the end, but not before a lot of singing, dancing, sun, frolics, and an ABBA cover girl band reunion.

If fluffy is your cup of tea, it doesn't come any fluffier than this. Get your appropriate dosage at the nearest cinema hall. Unfortunately, fluffy is all it's got, with no character depth, bare minimum acting and some very dodgy singing skills on display, especially when the James Bond starts singing some really surprising stuff. Brosnan can't sing to save his life, and so can't many of the major actors, which may have been fine for a Rock musical, but Abba? No.

Add to that a complete confused screenplay with a lot of subplots amounting to nothing, as well as comedy that isn't funny at all, and the whole film threatens to break down utterly. Thankfully, every time the movie seems to be dumber than a sack of bolts, it belts out another ABBA song, and that brings with it a great grin onto your face.

Mamma Mia! Is a very average film, and while I didn't hate it, I didn't think it was any good either. The litmus test for you is your love for ABBA. If you don't give a darn about them, you might as well stay away, but if you do, like me, think that Dancing Queen is the epitome of pop fluff, go ahead and enjoy the song and dance.
Share. Save. Connect.
Tweet
MAMMA MIA! SNAPSHOT

ADVERTISEMENT
This page was tagged for
Mamma Mia! english movie
Mamma Mia! reviews
release date
theatres list
Follow @fullhyderabad
Follow fullhyd.com on
About Hyderabad
The Hyderabad Community
Improve fullhyd.com
More
Our Other Local Guides
Our other sites
© Copyright 1999-2009 LRR Technologies (Hyderabad), Pvt Ltd. All rights reserved. fullhyd, fullhyderabad, Welcome To The Neighbourhood are trademarks of LRR Technologies (Hyderabad) Pvt Ltd. The textual, graphic, audio and audiovisual material in this site is protected by copyright law. You may not copy, distribute, or use this material except as necessary for your personal, non-commercial use. Any trademarks are the properties of their respective owners. More on Hyderabad, India. Jobs in Hyderabad.