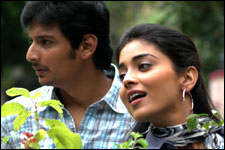 Deepa Garimella / fullhyd.com
EDITOR RATING
4.0
Performances
Script
Music/Soundtrack
Visuals
7.0
4.0
5.0
7.0
Suggestions
Can watch again
No
Good for kids
No
Good for dates
No
Wait to rent it
Yes
We wish we could say nicer things about Roudram than "yawn marathon" but fact is that this is a film that is as useful as a person who comes well-dressed for an interview despite being no good for the job. On the face of it, Roudram appears to be a layered film, but all that you're served is a masala flick that has its priorities all wrong.

Let's get the story out of the way, first. Siva (Jeeva) is an ordinary guy whose only - and we really, really, mean this in the most objective way possible - redeeming feature is that he can brutally beat up people. That's it about him: he cannot see injustice happening to other people, so he keeps thrashing up the villains.

And what thrashing up it is. The very enthusiastic makers make sure we don't miss the gross tics of the baddies, the crunch of every twisting bone, the clunk of every head smashed against metal, and the thud of every body flung onto the hard ground.

Meanwhile, Priya (Shriya Saran), an Assistant Commissioner's daughter, woos Siva with smouldering passion. And back home, Siva's family has no regard for his habit of being the city's hero - understandable, since they receive threats from powerful goondas.

The slow romance between Siva and Priya is a little cute to watch, but otherwise, this film has no entertainment value, and makes 2.5 hours seem like 10. Roudram's makers seem to have been convinced that shooting everything in slow motion makes for a great movie. Every scene is dragged, and even the dialogues are spoken in no hurry. And there's no special treatment for Telugu audiences in the dialogues department anyway, so the fun of watching a commercial film doesn't even exist.

To their credit, one compelling feature of some Tamil movies in this genre, including Roudram, is the authenticity of the middle-class setting. There's immense attention paid to detail when these families are portrayed, and these little vignettes of ordinary life are endearing.

Jeeva is expressionless, literally. Siva is a man of few words, so we don't get the chance to whistle at any rousing lines. And it's not even convincing to watch him fighting the baddies with superhuman strength.

Shriya is either charming or oversexed, depending on how you look at her. However, she is gorgeous in the movie - you cannot deny the fact that her sex appeal is so strong it inadvertently makes her dominate every scene she appears in, and sometimes, even scenes that she does not. Her acting needn't be talked about much, meanwhile.

Prakash Raj has a b-r-i-e-f role as the grand old man who taught Siva martial arts in Kerala (which is supposed to explain his insane strength). Siva's parents are played by persons seen in several Tamil movies. Jayaprakash, who plays Siva's father, is good. Meanwhile, it's nice to see Chaitanya (a Telugu cinema find) in a big (yes, it seems to be a big film) film, even if in an inconsequential role.

While Roudram's background music is loud, the songs are even louder. And the one sung by Udit Narayan is simply distracting. However, the movie has a slick look.

ADVERTISEMENT
This page was tagged for
Roudram telugu movie
Roudram reviews
release date
Jeeva, Shriya Saran
theatres list
Follow @fullhyderabad
Follow fullhyd.com on
About Hyderabad
The Hyderabad Community
Improve fullhyd.com
More
Our Other Local Guides
Our other sites
© Copyright 1999-2009 LRR Technologies (Hyderabad), Pvt Ltd. All rights reserved. fullhyd, fullhyderabad, Welcome To The Neighbourhood are trademarks of LRR Technologies (Hyderabad) Pvt Ltd. The textual, graphic, audio and audiovisual material in this site is protected by copyright law. You may not copy, distribute, or use this material except as necessary for your personal, non-commercial use. Any trademarks are the properties of their respective owners. More on Hyderabad, India. Jobs in Hyderabad.