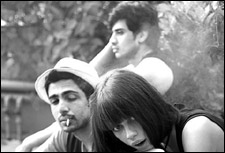 Nupur Barua / fullhyd.com
EDITOR RATING
4.0
Performances
Script
Music/Soundtrack
Visuals
5.0
5.0
5.0
5.0
Suggestions
Can watch again
No
Good for kids
No
Good for dates
Yes
Wait to rent it
Yes
In his latest presentation as a producer, Anurag Kashyap appears at the beginning of the movie to state that drugs and cigarettes are 'not cool'. Shaitan is his tribute to his yet-unreleased movie, Paanch, or so he has said at countless interviews, making Bejoy Nambiar's directorial debut one of the most hyped movies this summer.

Amrita Jayshankar alias Amy (Kalki Koechlin) is a seriously disturbed teenager, whose rich NRI father (Rajit Kapoor) does not take kindly to suggestions of mental institutes and the likes. Amy meets spoilt-little-rich-boy Karan Chaudhary aka KC (Gulshan Devaiya), who offers her a joint, and embraces her into his gang of socially-inept individuals, all of whom live off him.

Tanya (Kirti Kulhari) is a reluctant model/actor, whose ambitious sister (Rukshar) manages her career. Tanya and KC have an on-off relationship. Zubin aka Parsi/Bawa (Neil Bhoopalam) seems the sanest of the lot, certainly the most scrupulous, and he is secretly in love with Tanya.

The last cog in the 5-spoke wheel is Dushyant Saha aka Dash (Shiv Pandit), the part-time waiter who peddles cocaine. Amy is instantly attracted to him. Initially reticent, Dash becomes the natural leader of the group when disaster strikes.

In another part of town, suspended cop Arvind Mathur (Rajeev Khandelwal) goes around bashing men who treat women wrong, but paradoxically, his own marriage is on the rocks (Bud White from LA Confidential, anyone?).

After a considerable amount of debauchery, the youngsters find themselves in a situation that tests their relationships, patience and sanity. Enter Mathur, and his loyal colleague (Nikhil Chinnappa), and the tempo rises. The rest is predictable, as scripts go.

On second thoughts, it is not the screenplay that is at fault. It is the execution. Bejoy tries too hard to portray deviations, and then baulks from crossing conventional limits. The kiss between the 2 girls, the unnecessary violence inserted at regular intervals, the profane abuses, the stepmother who suddenly breaks down - all these for shock value, one assumes, but they fail to create an impact.

And then there is all that high-speed photography. Technically brilliant, and some great shots, but intercutting between slow-mo sequences just for the heck of it is not poetic. Also, the lighting is most unnatural, and rather convenient, in most scenes. In short, everything seems forced, and not at all cohesive, much like its music (although 'Amy's Theme' deserves a mention).

As far as characterisations are concerned, Amy is the most random. Is she crazy, or is she evil? Is she delusional, or is it the cocaine? Or is she just indifferent and uncaring? Kalki does her best, but she does not look 18 anymore, and seems to just zone out at times with her performance.

Raj Kumar Yadav as the corrupt cop and Neil Bhoopalam look identical. Both depict their roles with conviction, but the former deserves more screen time. Gulshan Devaiya is a revelation, and his character is the most consistent.

This is Shiv Pandit's second 'debut' (the first being Aagey Se Right). He does not look too comfortable with his part, given how sketchy the character is. That is a pity, because Shiv has the potential to become a great artiste.

Rajeev Khandelwal lisps his way through the movie. He is the protagonist, but his anger, suspension and marital tensions are never explained. On the other hand, it is a delight to watch Rajit Kapoor, despite his one-dimensional role. He plays the bewildered, impatient father with panache. Special appearances by Nikhil Chinnappa and Rukshar leave their mark.

Bejoy Nambiar has oodles of talent, but, unfortunately, feels the need for 'inspiration'. He seems to have had too many brainwaves during the making of the movie, at script level and on shoot, so the first element that jumps out at you from the experience is incoherence.

Shaitan fails to forge an emotional bond with the audience, despite the obviously sincere attempt. Wait for the DVD, or pray that Paanch releases in your lifetime.
Share. Save. Connect.
Tweet
SHAITAN SNAPSHOT

ADVERTISEMENT
This page was tagged for
Shaitan hindi movie
Shaitan reviews
release date
Rajeev Khandelwal, Kalki Koechlin
theatres list
Follow @fullhyderabad
Follow fullhyd.com on
About Hyderabad
The Hyderabad Community
Improve fullhyd.com
More
Our Other Local Guides
Our other sites
© Copyright 1999-2009 LRR Technologies (Hyderabad), Pvt Ltd. All rights reserved. fullhyd, fullhyderabad, Welcome To The Neighbourhood are trademarks of LRR Technologies (Hyderabad) Pvt Ltd. The textual, graphic, audio and audiovisual material in this site is protected by copyright law. You may not copy, distribute, or use this material except as necessary for your personal, non-commercial use. Any trademarks are the properties of their respective owners. More on Hyderabad, India. Jobs in Hyderabad.