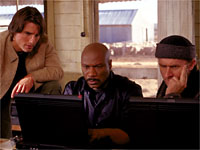 Feroz Hassan / fullhyd.com
EDITOR RATING
8.0
Performances
Script
Music/Soundtrack
Visuals
NA
NA
NA
NA
Suggestions
Can watch again
NA
Good for kids
NA
Good for dates
NA
Wait for OTT
NA
You'd think that after tackling an utter fiasco and coming out on top, a guy has to have a break or a job that is more fun and along expected lines, or partially so. Ethan Hunt is no different, and if anyone deserved it, he did. Hey, I'm not talking about a firefighter or a bomb defuser getting to be the president of the United States (that appears to be more fun, these days). More like a spy doing his agency's job than someone else' - a terrorist organization, as in the first installment of this series that may just about give the audience a spy that can take on James Bond. That may be the reason that things are so simple in this edition of M:I, as they like to call the series (it's on its way to becoming one). But heavens, it is that much more scintillating. It couldn't be much different with its dynamic director's stamp all over it.

The message reaches its target and self-destructs. The vacation is over, the masks are out, and it is another mission: impossible. It must have seemed so to Cruise and Wagner (the producers) when they decided to revive Ethan Hunt. But then Hunt is where the impossible is, so all they had to do was create the latter. In fact, the movie starts with a scientist saying something to the same effect - creating a monster in the search of a hero. The monster is a deadly virus Chimera that finds its way into the hands of the baddie, Ambrose (Dougray Scott). Hunt's assigned his mission, that of recovering Chimera, by his rather articulate boss, played by Anthony Hopkins.

His mission involves recruiting a master thief, Nyah (Thandie Newton), and no sooner do they meet than it's time for bed. It is quite disappointing then for Hunt to know that she is the ex-flame of Ambrose, and has to go back to him in order to elicit information from him. The only new twist to the plot after here is the fact that Ambrose has the antidote for Chimera, rather than the virus, which is not so safe in a pharmaceutical company's building. Somewhere down the line, the operation to retrieve Chimera becomes one to save Nyah from the virus.

On second thoughts, even in the absence of espionage jargon and subtle mind games, the plot is rather engaging. But what bestows the charm upon it is the action and style. With John Woo, they invariably go together. Now, if you are out to gauge the plausibility of the sequences, then you are definitely watching the wrong movie. But, if you consider choreographed action to be an art, then it doesn't get better than this. A slow-motion sequence has your attention by the scruff, and an abrupt speeding up of the scene jerks you out of your immobility. One has to say that the final duel between the Ambrose and Hunt does remind you of the WWF bouts. But the best part of it all is that Woo's action carries emotion that holds your attention as much as the actual stunt does.

But the movie holds its own, even in the absence of its USP for the most part. Sheer style and twists keep you glued to your seat. The screenplay, however, repeats most of the scenes from the original, and overuses the mask angle. What could have been better is the choice of the villain. Dougray Scott literally drawls his dialogues, and contorts his face to conjure up the only expression that he seems to be capable of, and it isn't pleasant. But Thandie Newton is. She oozes sensuality throughout, but never appears a bimbo. Tom Cruise, of course, has everything woven around him. Bu then, it isn't the most challenging role he will ever essay. He is competent and, most importantly, at his dynamic best.

A director at his peak, a star at his stylish best, a series extremely engaging and the most breathtaking locales. What more did you expect from the movie? If anything, then just watch a rerun of the original.
Share. Save. Connect.
Tweet
MISSION IMPOSSIBLE 2 SNAPSHOT

ADVERTISEMENT
This page was tagged for
english movie mi2
mission impossible fullhyd
Mission Impossible 2 english movie
Mission Impossible 2 reviews
release date
Follow @fullhyderabad
Follow fullhyd.com on
About Hyderabad
The Hyderabad Community
Improve fullhyd.com
More
Our Other Local Guides
Our other sites
© Copyright 1999-2009 LRR Technologies (Hyderabad), Pvt Ltd. All rights reserved. fullhyd, fullhyderabad, Welcome To The Neighbourhood are trademarks of LRR Technologies (Hyderabad) Pvt Ltd. The textual, graphic, audio and audiovisual material in this site is protected by copyright law. You may not copy, distribute, or use this material except as necessary for your personal, non-commercial use. Any trademarks are the properties of their respective owners. More on Hyderabad, India. Jobs in Hyderabad.